This year marks yet another inflection point on our way to becoming a “majority-minority” country. In 2015, for the first time, millennials -- 42 percent of whom identify as non-white -- are set to outnumber the majority-white baby boomers.

But you’d have little clue America was in the midst of a huge demographic shift from watching the weekend news shows, which more closely resemble a Tea Party rally than the rising “Obama electorate.” In the last year, around 75 percent of the guests on the major Sunday programs were white, according to liberal watchdog group Media Matters.

There was one exception: "Melissa Harris-Perry" on MSNBC, which featured more guests of color than white ones.

“My curiosity about the world, how it works and the choices people make in it tends to drive the choices we make about stories and topics to cover,” says host Melissa Harris-Perry, who is also a professor of political science at Wake Forest University. “The entire team is dedicated to the idea that the best way to satisfy our curiosity is to gather a diverse table of guests.” 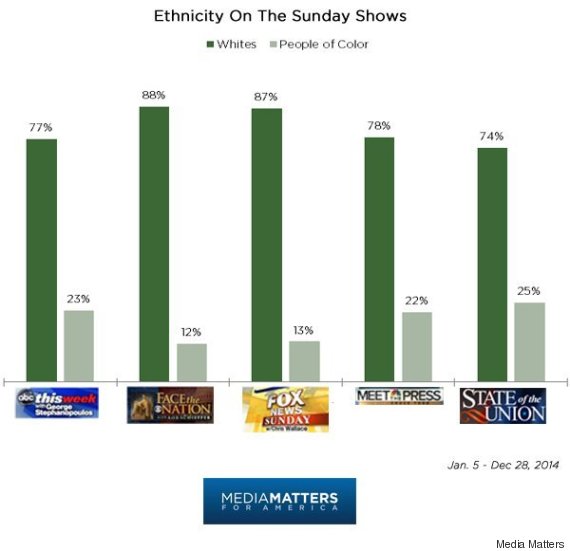 It’s not that the other hosts and producers aren’t curious; it’s that in the flurry of activity before the “on air” sign lights up, few dedicate time to thinking about the makeup of their panels. If asked, almost all see diversity as a worthy goal in the abstract, but with guests booked on the same day and with frequent cancellations, most are happy just to have someone in the seat come airtime. But in relying on the existing Rolodex of middle-aged white men, producers are limiting the scope of the discussions they broadcast -- and their appeal.

“Part of what we’re trying to do is make sure you’re not hearing from the same cast of characters giving the same talking points time after time,” says Eric Salzman, executive producer of "Melissa Harris-Perry." “The very people who you invite to the table for discussion are going to inform how the discussion takes place.”

While Salzman says the show has no formal mechanism for keeping track of the racial composition of their panels -- “Media Matters lets us know,” he says -- the staff talk openly about diversity every time they assemble a lineup.

The primary challenge for producers looking to expand their circle of contributors is that bringing on guests of color frequently requires inviting those without previous television experience -- drawing from the backlog is a safer, easier bet. One thing that’s helped "Melissa Harris-Perry" cultivate a diverse array of guests is the host’s ties to academia; as a black woman and scholar of African-American politics, Harris-Perry is also plugged in to a wide network of intellectuals of color.

“One of very first things we do is say, ‘Melissa, anyone come to mind?’” Salzman says. “One of great things about working with Melissa is that she is an atypical news television host -- the background she comes from, the work she does in academia means she’s just aware of all sorts of different people.”

Among the regular contributors of color the show has tapped are Columbia University professor Dorian Warren and University of Connecticut history professor William Jelani Cobb, who are black; Yale law professor Akhil Reed Amar, the son of Indian immigrants; and Cristina Beltrán, director of Latino Studies at New York University.

But while Media Matters commended the "Melissa Harris-Perry" show for far outpacing its competitors in terms of diversity, its annual report noted that the bulk of the program’s contributors of color are African American; Latinos, Asian-Americans, and other racial and ethnic minorities are still underrepresented.

While NBC shows -- including Harris-Perry’s -- may have room for improvement on the diversity front, Salzman praised MSNBC’s commitment to inclusivity.

“It sounds horribly corporate, but the company we work for has a huge commitment to this issue,” Salzman says. “I can’t begin to tell you how much that matters -- the most important thing to do is first acknowledge this is something [the company] cares about.”

“The idea was to get producers in the room and let experts from different fields deliver pitches,” says an NBC spokesperson. “Diversity is important throughout the whole company.”