A Philadelphia fifth-grader was searched and reprimanded by school officials after bringing a piece of paper that resembled a gun to school.

Last week, Melody Valentin found a paper gun her grandfather had made buried in her pocket. When she went to throw it away, a fellow classmate saw and alerted school officials who then scolded and searched her, according to Fox 29 Philly. Other students began calling her a "murderer."

Valentin says one administrator went overboard while handling the situation.

"He yelled at me and said I shouldn't have brought the gun to school and I kept telling him it was a paper gun but he wouldn't listen," Valentin told Fox 29. This official also allegedly told the young girl she could be arrested.

Valentin's mother is keeping her out of school to avoid the harassment.

Tensions have run high in schools across the nation in the wake of the Sandy Hook Elementary School shooting last month. 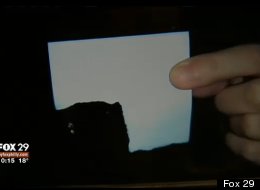 A 5-year-old was suspended Jan. 10 from her Mount Carmel, Penn., school after she allegedly said she would shoot a classmate and herself with her Hello Kitty bubble gun. The school deemed her a "terror threat."

The girl's parents attempted to fight the suspension. “This logic, which was not said in malice, came from the mind of this beautiful 5-year-old child who was playing with her friends, whom she hugs every day,” the family's attorney told the Daily Item. “And this shows how hysterical people who work at schools have become since Sandy Hook.”

A first-grade boy faced a one-day suspension from a Maryland school last month after he allegedly used his fingers to create a "gun," pointing it at a classmate and saying "pow."