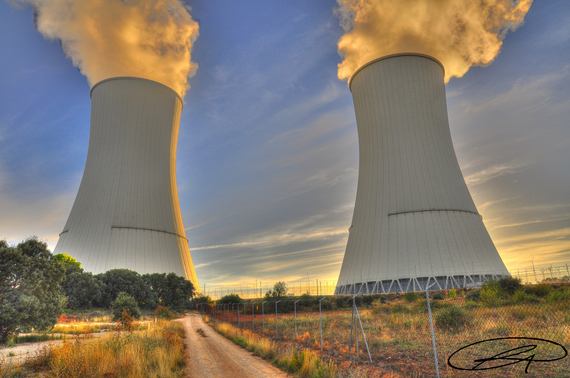 This piece was adapted from Tomorrowland: Our Journey from Science Fiction to Science Fact by Steven Kotler.

We use a lot of energy. A lot of energy. Thus, if you want to talk safety and security, you have to start with the options available. Can solar and wind even satisfy our needs? Can green techs ever handle base load demands? Will better energy storage systems soon come online? Hard to say. As a result of this uncertainty, most experts frame the discussion as coal versus nukes. "Nukes win every time," says retired Argonne National Laboratory nuclear physicist, George Stanford. "Fifty-six people died outright at Chernobyl. We could have three or four of those a year and not do the damage coal does."

New York Times journalist and author of Power to Save the World: The Truth About Nuclear Power, Gwyneth Cravens, explains further: "If an American got all his or her lifetime electricity solely from nuclear power, that person's share of waste would fit into one soda can. If an American got all his or her electricity from coal, that person's waste would weigh 68.5 tons and fit into six 12-ton railroad cars. And their share of carbon dioxide coal emissions would come to 77 tons." Nukes, meanwhile, have virtually no carbon footprint.

Settling this debate may take some time--and since time is the one luxury both sides agree we don't have--there are heated arguments about the best way forward. Many smart scientists claim that nuclear energy is the only way through future crises. Plenty disagree. But lost in all this fuss is a four-decade revolution in the science that promises a next wave of nuclear power: cleaner, safer and less vulnerable to terrorist attack or natural disaster. 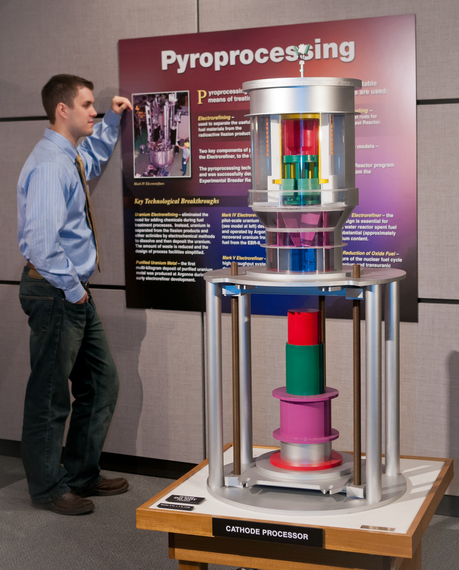 Development of the IFR began in 1984 and by 1992, the designs were complete, but then Bill Clinton decided to save money by shutting down any nuclear projects he deemed unnecessary. "It's a crime," says former Argonne nuclear physicist George Stanford. "We set out to build a reactor that addresses all the nuclear concerns: safety, efficiency, proliferation, and waste. It worked perfectly. IFR solves all our problems. And it's just sitting on a shelf."

Among the problems "solved" by IFR is safety. Liquid metal fuel expands when heated. As the metal expands, its density decreases. This changes the geometric trajectory of the neutrons bouncing around inside and the laws of physics don't allow it to sustain a chain reaction. "It can't melt down," says Stanford. "We know this for certain because in public demonstrations Argonne duplicated the exact conditions that led to both the Three Mile Island and Chernobyl disasters and nothing happened." This is known as "passive safety" and every Generation IV reactor works this way.

Proliferation is another problem solved. An IFR reactor is built so that whatever fuel enters always leaves as electricity. What's actually inside the reactor--if terrorists, say, seize a facility--is far too hot to handle, so the main result of such an attempt would be dead terrorists. And the waste is only a fraction of what's produced by thermal reactors (a 1000-MW thermal reactor produces slightly more than 25 tons of spent fuel annually; a fast reactor generating the same power produces one ton). Moreover, this waste doesn't contain weapons-usable material, only stays "hot" for several hundred years, and remains as an inert solid--essentially stored as glass bricks--so even if the containment facility were to breach, it can't leach into the ground water.

All of this explains why, in 2002, the U.S. Department of Energy organized the most comprehensive study of nuclear design options ever conducted, asking over 250 scientists to rank nineteen existing nuclear options based on 27 criteria. IFR came in at number one. For this reason, Columbia University professor and head of NASA's Goddard Institute, James Hansen--often credited with being the first person to sound the alarm bells about global warming--put IFR on his top-five list of things we need to do to stave off climate disaster. The truth of the matter," says Tom Blees, "is once most anti-nuke people hear about IFR, they tend to switch sides pretty quickly." 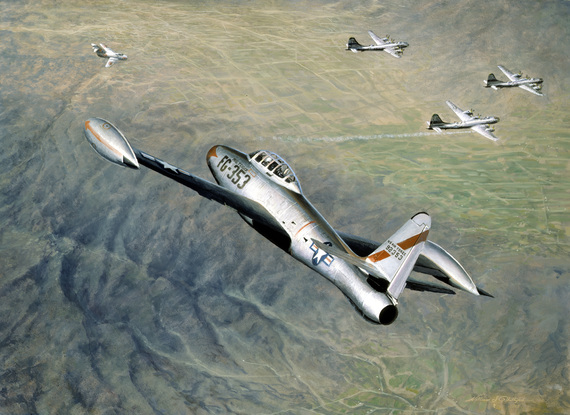 LFTR began its life as a solution to a peculiar 1940s Air Force question: Can we use nuclear power to fly a bomber indefinitely? The basic answer was yes, but intercontinental ballistic missiles turned out to be a better way to fight the Cold War. Before that happened, research on the project was spread among a number of different centers, though Oak Ridge National Laboratory took the lead throughout the 1960s, even building a prototype LFTR reactor that went critical in 1954 and ran for 100 hours nonstop before being shut down.

After that program was cancelled, the idea never quite went away. A small cadre of Oak Ridge scientists kept it alive. Lately, the cadre has been expanding, primarily because LFTR has some significant benefits over other nuclear technologies--mainly the fact that it runs on thorium.

Thorium is a mildly radioactive element found in significantly greater quantities than uranium. As there are growing concerns about our dwindling uranium supply--some experts predict we could run out of our main nuclear fuel within 100 years--this is good news. More important, thorium provides more bang for our buck. In a standard thermal reactor, it takes 250 tons of uranium to create a gigawatt-year of electricity. LFTR requires only one ton of thorium to produce the same output. And less fuel makes for less waste. A lot less. Thorium creates less than 1 percent of the waste of a standard light-water reactor, and most of that "waste" isn't waste--rather a collection of valuable elements like rhodium.

Finally, LFTR allows for continuous refueling, meaning the reactor never stops operating, which makes it both incredibly efficient and a lousy target for terrorists intent on theft of nuclear materials. This level of safety and efficiency could lead to assembly-line production, making thorium reactors the Model T of nuclear designs. "To stop global warming," says Kirk Sorenson, chief technologist for the Energy from Thorium Foundation, "we need thousands of new reactors worldwide; currently we have hundreds. It took three years from when they invented the fluoride reactor until they built the first one. That was fifty years ago, and we know a lot more about how to do it now."

It's for this reason that a number of countries now have serious thorium programs underway. India, which has abundant thorium reserves, plans to generate 25 percent of their electricity from the element. China, meanwhile, is being even more aggressive. Asia's giant has a dedicated team of 750 researchers working the problem and plans to have its first thorium reactor up and running by late 2015. In the U.S., TerraPower, founded by former Microsoft chief technology officer Nathan Myhrvold, with backing from Bill Gates, is working on a "traveling wave reactor"--often described as "the world's most passive fast breeder reactor"--that will be able to run on both thorium and uranium and is due, in prototype form, by 2020. 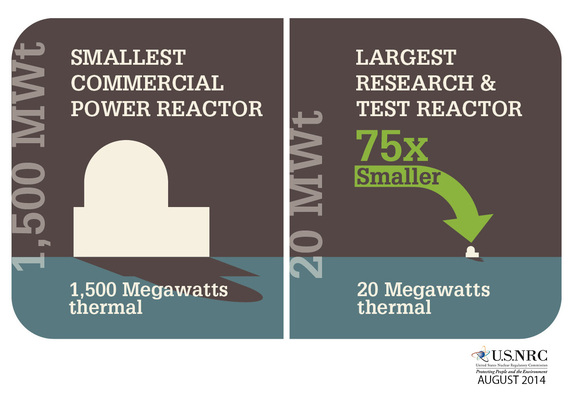 So-called "backyard nukes." These mini-nukes generate between 45 and 300 megawatts of power (compared to 500 megawatts for the smallest thermal reactor now on the market), are built modularly (and, at roughly $1 billion per, relatively cheaply), then sealed completely at the factory, shipped via rail, and arrive at their destination "plug and play." Once installed, they're designed to run for years without maintenance. A number of familiar faces (like Toshiba and Lawrence Livermore Laboratories) and several nuclear newcomers (like New Mexico-based Hyperion Power Generation and Oregon- based NuScale Power) have gone into this area because SMRs are believed to fill a niche.

In places where water shortages are a problem, SMRs could be used to run desalination plants; in places too remote for other options, SMRs could be the best alternative to trucking in barrels of diesel. Much interest is centered around providing power for remote mining operations (like extracting oil from tar sands, which currently uses more oil than it produces), backing up intermittently plagued solar or wind facilities, or even --in the very long term --serving as hydrogen generators.

While in office, President Barack Obama has been supportive of nuclear energy, but he also called the Nuclear Regulatory Commission a "moribund agency that needs to be revamped and has become a captive of the industries it regulates." This doesn't bode well for new nuclear technologies since they all must be approved by the Commission before deployment. And if Obama plans on revamping an agency that already claims to be severely understaffed, then once again we run into the wall of time.

Which raises the final question worth asking--what does all this excitement really mean? Not much as yet. In fact, despite recent and significant forward progress, because of the devastation that occurred when an earthquake, then a tsunami, struck Japan's Fukushima Daiichi Nuclear Power Plant, many countries are revamping their nuclear plans. Japan itself has shut down forty-eight of its plants. Germany halted its efforts to become a leader in nuclear power. Once again, the experts are predicting the end of the industry.

Yet a few key facts are often left out of the post-Fukushima debate. First, nuclear development hasn't completely stalled. China continues to ramp up production and Saudi Arabia just announced plans to become a major player, wanting to draw 15 percent of its total energy from nuclear by 2034. More importantly, if the reactors inside the Daiichi plant had been Generation IV, their passive safety design would have ensured that all of this mess could have been avoided. Instead of tragedy dominating the news, we could have been having discussions about the safety and efficiency of new nuclear designs. Either way, whether it's a new nukes revolution or a Manhattan-style project to bring renewables up to speed, everyone agrees that if something doesn't happen soon, we may very well be designing our future technologies in the dark.