It is tough to argue with a man with a net worth that begins not with an "m" but with a "b." The man didn't inherit his billions, he got them by investing early in promising but not yet proven technologies. This suggested the billionaire had the power of clairvoyance and, so, when he talked about the future of the planet and global warming, I had to listen.

What the billionaire had to say to me was shocking. He argued that the public, you and I, do not really matter when it comes to global warming. It is all about technology, he said. People will always chose the cheapest, most convenient way.

In his view, the only way to keep carbon dioxide out of the atmosphere is for clever engineers to come up with cheaper more convenient methods to get the job done while producing less greenhouse gas. In other words, this very rich man was arguing that it matters not a whit whether or not the public is educated about threats to the environment. Deliver folks cleaner, cost-effective technology and that is how the problem gets fixed. 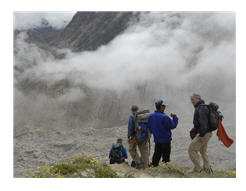 I thought a lot about this conversation with the billionaire as I climbed to the top of the world to examine clear and present signs of global warming for a show airing this weekend on NOW on PBS. My destination was the Himalayan glacier that feeds the sacred Ganges River in India, a glacier that scientists say is endangered as the climate changes. I was accompanied by Conrad Anker, the famed mountaineer who discovered George Mallory's body on Everest.

The plan was to take our television audience on a memorable voyage of discovery (to India, among other places) with a compelling travel companion (Conrad) consulting with experts along the way. The operating assumption was the more people engage the global warming issue, the better, regardless of which direction their engagement points them.

But what if the billionaire was right and it is all about economics not about public understanding? If that is the case I could have left the TV cameras home, spared myself the climb to 15,500 feet, and instead found a convenient beach. 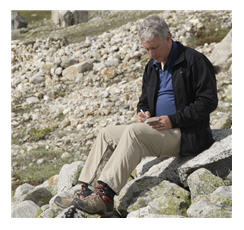 As we continued reporting this project, now called "On Thin Ice," (which airs on PBS Friday, April 17 -- check your local listings) it became clear how wrong the billionaire was, his business acumen notwithstanding. During our travels, we came across no course of action when it comes to global warming where there is a free lunch, delivered through technology. Every single course of action on climate change -- do a lot, do a little, do nothing -- has a cost to the public.

It seems to me the crucial question policymakers should be asking the public is "Since you have to pay one way or another, how much are you willing to pay for the outcome you want?" These are tough decisions and it is policy that needs guidance from an informed public that will be asked to make sacrifices under all scenarios.

But don't listen to me. Of all the b-words people hurl my way, none of them is "billionaire."

See a preview of the show (and my eye-opening journey) below.