The sophistication of federal lawmakers' speech patterns is on the decline, with members of Congress now talking, on average, at the level of high school sophomores. According to a new report by the Sunlight Foundation, Congress has fallen by almost a full grade-level since 2005.

The members speaking at the lowest grade levels tend to be freshmen Republicans.

As NPR noted on Monday, "Of the 10 members speaking at the lowest grade level, all but two are freshmen, and every one is a Republican." That measurement is for all speeches since 1996.

"Particularly among the newest members of Congress, as you move out from the center and toward either end of the political spectrum, the grade level goes down, and that pattern is particularly pronounced on the right," said Lee Drutman, a political scientist at Sunlight.

Rep. Mick Mulvaney (R-S.C.) clocks in at the lowest grade-level: 7.9 in this Congress.

"I was trained to write in a clear and concise fashion, and you didn't use big words if small words would do," Mulvaney, who graduated with honors from Georgetown and earned a law degree from the University of North Carolina, told NPR. "Certainly I'm not trying to dumb down the message by any stretch of the imagination."

Sunlight did not reach a definitive conclusion on why lawmakers' speech patterns have become simpler over time, although Drutman wrote in a blog post, "Perhaps it reflects lawmakers speaking more in talking points, and increasingly packaging their floor speeches for YouTube. Gone, perhaps, are the golden days when legislators spoke to persuade each other, thoughtfully wrestled with complex policy trade-offs, and regularly quoted Shakespeare."

Rep. Dan Lungren (R-Calif.) has both the top lifetime average and the top average in this Congress. He is at the equivalent of grade 20 for this 112th Congress. Republicans also outnumber Democrats at the highest grade levels.

Sunlight also found that members of Congress rarely use the 100 most common SAT words, which are likely very familiar to high school students.

The most commonly used SAT word was, ironically, "compromise." It has been used 1,820 times in this Congress as of the end of April. Senate Majority Leader Harry Reid (D-Nev.) has used it more than anyone else.

Chart by the Sunlight Foundation: 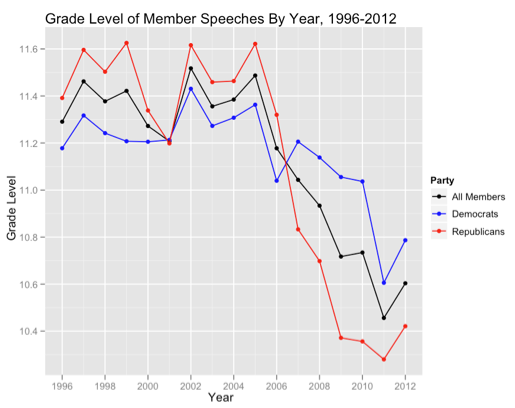