Competition among schools for students and among parents for entry into schools will not lead to systemic improvement or equity in education. It hasn't happened anywhere, nor is there evidence that it can. That has not stopped advocates for the expansion of charter schools from promoting what they call a portfolio strategy in which money would follow students to a mix of charter and public schools, all funded with public tax dollars. They tout this as empowering parents with choices. The appealing sounding terms evoke risk-balanced investments in mutual funds that compete for customers. However, in the stock market there are always winners and losers. Corporations gain and lose in value, come and go. Within this policy framework, schools open and close based on market forces. It is the students who do the coming and going. Choosing different Internet browsers or closing restaurants does not disrupt lives. Closing and changing schools disrupts the lives of children with already unstable lives. 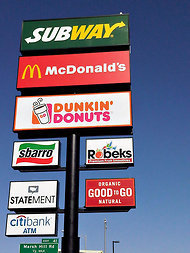 The emphasis on competition and individual choice in education rather than collaboration and systemic improvement is more akin to finding a decent meal on the interstate: Faux choices have proliferated, but they do not ensure that everyone gets a nutritional meal. The best quality meals are found off the freeway and are only available for those with more wealth.

Surely, this is a familiar scenario. It has been a long day of driving. My wife and I are tired, hungry and beginning to get a little cranky. After passing many exits, where the only alternatives are fast food or a dilapidated greasy spoon, we give up and with resignation make the least bad decision among the many "choices" now available at rest stops. Then we engage in what we call utility eating. It staves off hunger, but the food is neither tasty nor wholesome. Anything resembling ambiance is, well, absent. On occasion, when we are feeling less pressed for time, we wander off the highway into a town and find an affordable restaurant. Depending on the location, we are sometimes pleased with the fare, but other times we are disappointed. Food snobs, you say? I don't think so. We just want a flavorful, healthy meal without having to pay a fortune.

As it is with eating, so it is with choosing schools and school policy. Indeed, across the education landscape, there are now many so-called choices, albeit severely constrained by geography and demography. The billionaires who promote school choice- charter schools for other people's children- live in a rarified world of personal privilege. They don't drive on interstates, but instead travel on private jets. The one-percenters have their posh restaurants, private clubs, private chefs, and private schools to feed their culinary and educational appetites. The upper middle class who often live in less than diverse communities have both better food choices and better-resourced schools.

A recent report by OECD indicates that the risk factors for low-performance are cumulative, multi-dimensional, and persistent. While around the world poverty is a leading contributor, its effects vary from country to country. However, interrelated socioeconomic factors are considerably more impactful in the U.S. than in many other developed nations and even in countries with far less wealth. If the contributors to disparate education outcomes are complex and multiplicative, so must be the solutions. We do not have to accept scarcity or growing inequality as the inevitable reality. We all deserve better. However, we will not get better if we remain trapped within existing education funding and governance structures. We will not get better if we expect education alone to make up for the multiplicative advantages of wealth.

Currently, federal and state aid to schools does not mediate vast difference in wealth across and within states. Because the U.S. relies on local taxes to fund education, families with the least income get shortchanged when they live in communities that lack community resources and political influence and that experience the greatest social and economic challenges.

However, it is not just the poor who get the short end of the education stick. Families with low to modest incomes suffer too through overly burdensome tax bills, large class sizes, and under-resourced schools. The expansion of privately governed charter schools undermines the political influence of the non-privileged even further by making parents customers rather that participants in democratically-decided policy making.

As a result, far too many children are deprived of a broad-based education focused on deeper learning. Supporters of charter schools-who send their own children to private schools-have no such problem because their wealth buys influence. They do worry that over-testing in reading and mathematic crowds out the arts, science, and social studies. They do not worry that strict disciplinary regimens will train their children for compliance rather than creativity or leadership. They do not worry, as poor and minority communities must, that a state take-over of schools and districts deemed underperforming and dysfunctional will deprive them of a voice in their schools.

Opponents of equity have been successful in preventing substantive change because when there is little leadership for equity, hopes are crushed. In an economy of scarcity people often come to perceive someone else's gain as their own loss. This is only true because the U.S. has lacked the political will. The result is that the have-nots squabble while the haves continue a life of privilege. It is no coincidence that extraordinarily wealthy foundations and individuals prefer to contribute billions for education reforms they favor and to privately governed charter schools rather than pay higher taxes for democratically governed school systems. They support ideas like student test score-based merit pay for teachers despite the lack of evidence. They do so not just to undermine unions, but because it comports with their self-aggrandizing delusions that their own privilege is purely the result of merit and the discredited notion that competition for extrinsic rewards motivate effective work.

Economic and racial isolation in the United States has led to stunted academic achievement and politically undermining disunity. Unfortunately, the struggle for integrated schools has at times been framed in ways that diminish its broad appeal. The value of integrated schools goes far beyond a strong moral and strategic imperative and its value for poor and children of color. Learning in a supportive diverse environment benefits all children. Knowing how to function successfully in diverse environments is a necessary 21st-century American workforce and citizenship skill. In addition, diversity-informed decision-making provides a competitive advantage.

The world of corporate dominance has given us a plethora fast-food choices. They are profitable and fill us up, but are nutritionally starved. We don't need fast-education choices in which students fill up on testing but are educationally starved. We don't need euphemistic stock market metaphors like portfolios of schools that- like in our financial system- serve to exacerbate an inequitable status quo.

Changing this shameful situation is not the pie-in-the sky. Many of the possible solutions are common in other nations.

These strategies are not a menu from which to choose. The must be done in concert. As indicated in the OECD report and in a similar report on life-expectancy variation, problems routed in systemic inequity require, complex interdependent solutions. Of course, comprehensive solutions are extraordinarily challenging to achieve politically. They are achievable, but only if an interracial political and social movement develops the strength to elect leaders who do not owe their allegiance to wealthy contributors and lobbyists.

Arthur H. Camins is the director of the Center for Innovation in Engineering and Science Education at the Stevens Institute of Technology in Hoboken, N.J. He has taught and been an administrator in New York City, Massachusetts and Louisville, Kentucky. The ideas expressed in this article are his alone and do not represent Stevens Institute.
His education policy writing is collected at http://www.arthurcamins.com
He tweets at https://twitter.com/arthurcamins.