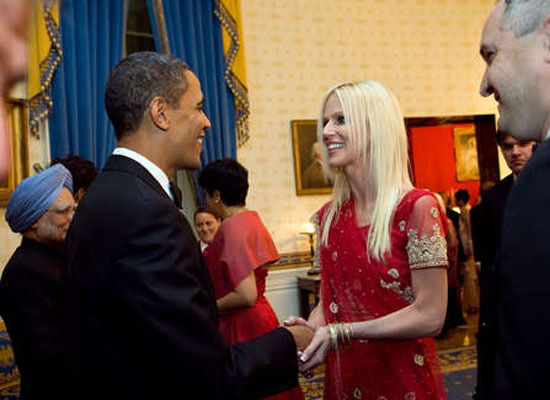 Ever since the idiocy of “Balloon Boy,” I have been pining for the moment where fame-whores finally cross a line, and face serious repercussions for their stupidity.

Jim Mackin, the agency's spokesman, said this is one reason the Secret Service has kept mum about what happened when the couple, who are auditioning for the Bravo reality show "The Real Housewives of DC", arrived at the security checkpoint Tuesday. They were not on the guest list for the dinner honoring Indian Prime Minister Manmohan Singh but managing to get into the party, where they posed for photos with Vice President Joe Biden and Chief of Staff Rahm Emanuel.

By now, you know the story.
A couple of empty-souled "socialites" desperately
trying to get onto “The Real Housewives of DC” somehow managed to crash a
state dinner.

You also know by now, they managed to come in contact with the
President of the United States.

So – there’s fraud in this.
There’s a breakdown of security in this. But for this couple -
there’s the hope of fame in this. Their lawyer (Surprise! An entertainment lawyer!) says this of anyone who might have disparaging comments about these
bobbleheads:

“"We will begin doing press and media
next week providing exclusive interviews and press junkets. If you would like
to be considered in our media circuit we request that you hold your proposed
published profile until then."

Even if
they WERE invited to this state dinner, something I highly doubt considering their car was turned away
at the first checkpoint… who the hell uses it as a chance to
dive into a reality TV dumpster?

Luckily, next Monday's visit to Larry King and his hour of suspendered softball questions will not be the last stop on the Salahi tour. And thankfully, there’s more than just “The
Insider’s” Lara Spencer letting us know how to wear Michaele’s look
for twenty bucks.

The Secret
Service is involved and you can bet, they’re pissed. It’s the President of the freakin’ United States, and a couple of
grifters got close enough to him to shake his hand.

However, they also could have gone at him with a butter knife, tossed a shoe at him, or
opened up an envelope of anthrax.

These are worst-case scenarios, but that’s what the Secret Service
should be watching out for. What could happen. What could go wrong. And examples need to be set.

Not just of whoever dropped the ball here - although some agent will more than likely be guarding a Nordstroms over this.

No... the more important example should be made of the Salahis. They are the high-profile face of this debacle, the smiling, vapid dolts who should be punished accordingly.

Treat them as the threat they
COULD have been, and make an example of them to anybody else who’d like to make
a run at the President for any reason - be it personal gain, or baser motives.

Let their misery be the cautionary tale for anyone who thinks the real
world has endless patience for behavior unbecoming of a toothless carny.

That’s the dose of reality I’d like to see come out of this.