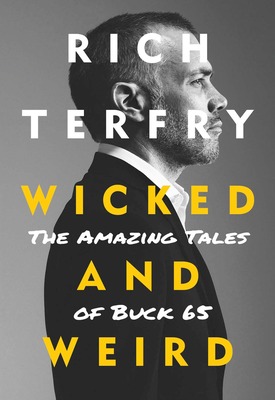 "Making myself vulnerable is never easy," says Rich Terfry (also known as Buck 65), "[but] it always turns out to be a positive thing."

The acclaimed Canadian hip-hop artist, producer, and radio host is speaking to me via Skype about his new memoir Wicked and Weird: The Amazing Tales of Buck 65, unaware that he's just made the understatement of the century. Within the book Terfry recounts in vivid sensory detail the many adventures that have resulted from transforming his introversion into meaningful connection with the wider world. Such exploits include being held at gunpoint by rappers angry that a white man was "invading" their turf, inadvertently agreeing to dinner with potential cannibals, and spending two months in a Russian prison, to name but a few. Throughout his various trials, Terfry has remained a prolific musician celebrated for his combinations of hip-hop with blues and avant-garde elements (nearly every review of his concerts features the word "magical"). More impressive still, he's retained his faith in people's essential goodness.

These paradoxes -- reality versus imagination and trust, sensitivity plus endurance beyond belief -- create the central themes of Wicked and Weird, which follows Terfry from his impoverished childhood in 1970s Nova Scotia to the creation of his 2009 album More Heart than Brains (a collaboration with Belgian producer Greetings from Tuskan). It's a unique memoir that defies description, much like Terfry's music, but the fast-paced and profoundly emotional read is an experience not to be missed.

The first word I associate with his book, I inform Terfry, is "visceral." Violence and sex permeate his pages, even from Buck's youngest days in the small town of Mt. Uniacke, where teenagers regularly commit suicide (a problem he reports is still ongoing) and our preadolescent hero dreams fondly of seeing his friend Sherry's boobs (which he eventually does). This continues into Buck's private life, where his depressive mother's rages cause him unmitigated anxiety. After escaping Mt. Uniacke at 17, life continues rife with physical pain, disappointment, and sexual titillation from the depraved to the transcendent and everything in between.

Terfry's complicated relationship with his mother (who died in 1999) dominates the book; in a manner reminiscent of Jeannette Walls' The Glass Castle, he conveys the hardships of dealing with a difficult parent, miraculously devoid of resentment.

There were a lot of times where she was upset for one reason or another, and I could've interpreted that as "You don't love me" or "You're mad at me" or whatever the case may be, but really I just had to accept my mother for exactly who she was, accept her struggles along with it, and choose to love her without condition. Not just love her on good days, but love her no matter what. My world revolved around her. [My father] ran a gas station, so he was there all day long, and I was growing up in the house with my mom and my sisters. I was very protective of [Mom] and her emotions... Being very young and not necessarily equipped with knowing the right way to do that, the best way I could figure out was to disappear myself, stay out of the way. I [didn't] ever want to be the cause of her tears. I always wanted to impress her, but I never really felt that I was succeeding.

Wicked and Weird could easily be a tragedy, but instead Terfry's use of language and dramatic storytelling elevate it into a fascinating study of human resilience. Each scene is almost Proustian in its evocativeness, so richly detailed that the reader can feel hearts breaking in every chapter. Stories of turbulent romances -- like Buck's relationship with novelist Claire Berest -- mingle with anecdotes of loss and self-discovery. Some are darkly funny amid the sadness; some are humbling. Some are even palpably joyful, especially when Terfry discusses his special passion, playing baseball:

People who say baseball is boring are the same people who get antsy in art museums... They don't hear the accidental music made by trains and broken air conditioning units. They're blind to the beauty of an old, greyed, half-collapsed barn or an abandoned warehouse that's been annexed by wildlife. Legendary baseball broadcaster Red Barber once said, "Baseball is dull only to dull minds." There's poetry in the quiet in-between moments of the game and true splendor in its climaxes... The 4-6-3 double play is a three-second ballet. And I've seen few things as grandiose as a home run. Baseball reveals its magic only to those who watch with fine-tuned attention. (p.45)

In fact, Terfry explains that he used a sort of sense-memory technique to write the book.

I found myself almost meditating, and I'd have to spend more time just sitting still and letting myself feel things than actually writing. I'd almost have to transport myself back to when I was a kid... and when that moment came it just clicked. I feel sometimes what might be better than explaining something to somebody [is] if you can make them feel what you felt.

Here's a little of that prized vulnerability seeping through. Terfry was scouted for the Yankees at age 16. His memoir does for baseball what Ken Dryden did for hockey in The Game, converting his love for the sport into a metaphor for life's intangibles. It becomes all the more poignant when Terfry reveals that his envisioned purpose of playing professionally ended due to injury, thus pointing him on a winding path toward music.

The dream deferred remains an indelible part of Terfry's routine, he admits, since even on the eve of his book release he was still remembering the great game he'd had the night before.

That dichotomy [between music and baseball] has been a daily thing for me for a long time now, but I find interesting little connections between the two all the time, and one thing I really like about baseball is that [it's] a musically rich game... and some of the best broadcasters for baseball games are real poets. One of my favorites is [L.A. Dodgers announcer] Vin Scully, and his use of language is truly inspiring. You can't quite call it singing, but it's not too far off.

As Terfry and I rhapsodize about our shared obsession with sound, I point out Wicked and Weird's most fantastic quality - its many instances of magic. Surprising since Terfry has a biology degree and considers himself totally scientific, but the memoir contains multiple references to past lives, telepathy, spirits, psychic phenomena, and unusual occurrences, particularly an encounter with TV mentalist The Amazing Kreskin.

"It blew my mind in the moment," Terfry recalls of meeting his boyhood idol.

My mind is still blown, and I don't ever think it won't be blown. Here I was having this encounter with this man one-on-one, we're the only two people in the building, there's certainly no one around who could've been feeding him information, and he's just standing there telling me all of these things about myself he couldn't possibly have known. And I'm okay with not having an explanation for that; sometimes you've got to let the world show you a bit of magic.

In one personal way Terfry believes in magic; he says his mother occasionally visits him in dreams.

It's always felt very much like she's come to check in, and it's just the two of us in a room and then we talk. Interestingly she usually gets dressed up for it and her hair is nice, and it seems to happen with very good timing. It feels like she always comes along at a time when I'm feeling I'd really like to have a conversation with her.

It's said that most people change for the better when they cross over, that their snobbery or anger or other obstacles to communication in mortal life dissipates when they reach the spirit world. I don't know if Terfry agrees, but he does share one memory that didn't make it into his final draft:

I had made a visit home after I moved out, and I was sitting at the dining room table with my mother and a friend [of hers], and my mother turned to this person and said of me, "You know, he was the best kid any mother could hope to have." It was just a little moment, over in five seconds, but it was that one moment of validation that I had been looking for my whole life.

So maybe this is what you get from vulnerability, from opening yourself up to people and giving them a chance to do the same. It's never easy, as Rich Terfry states, but if you're lucky enough to accept the world's magic as it comes, it might just show you more of it.