As citizens all over the United States prepare to celebrate Memorial Day I can't help but wonder whether I should hang an American flag in front of my house.

While some Americans will spend May 31st hitting beaches and lakes, focusing on the fact that Memorial Day is the first unofficial day of summer, still others will attend parades and civic events, celebrating the holiday as it was originally intended, reflecting on those who sacrificed their lives for our freedom. The assumption one might make here is that those attending the parades will hang flags while those at the beach will not. That would be my assumption, my judgment call. But I know how wrong I am to judge.

I won't be at a beach or a parade, I will be at a soccer tournament, but I do own a flag.

Actually, I purchased my flag more than three decades ago on a sixth grade visit to Gettysburg. A day after 9/11, I dug it out of a box marked "Cari's stuff" written in my mother's scrawl. The box with the flag buried deep inside had moved with me into my adult home, but remained stored in my suburban DC garage for years. I pulled out the flag, attempted to smooth out the creases and then, like many Americans in the days, weeks and months after September 11th, I hung the flag proudly in front of my house.

About a year later, tattered and tired, the flag was unceremoniously taken down. It hasn't been hung since.

With Memorial Day upon us, I wasn't completely conscious of my flag-hanging hesitation until I met Alison Buckholtz a military wife and author of Standing By: The Making of an American Military Family in a Time of War. Her feeling, that the flag had been soiled by partisan politics, I came to realize, was exactly what was causing my hesitation, was prompting me to ask if I should fly the flag.

"This is the first year that we have owned a big American flag that can wave from the front yard," Buckholtz told me recently. I was, admittedly, a little surprised. She had purchased the flag, she said, for a photo shoot, for a photograph that would accompany an article she wrote. I was surprised because her husband, after all, is a career military man, a Navy Commander in the middle of a year-long deployment in Iraq. 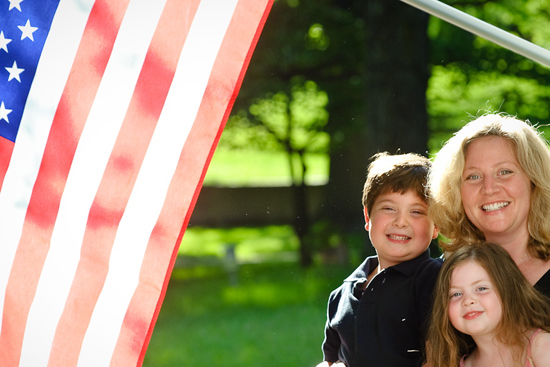 Buckholtz explained that the symbol of American freedom, "the flag, had come to symbolize partisanship. I didn't want to be associated with people who used the flag or who exploit the flag for their cause, for political purposes. But, putting the flag up ... was a really transformational experience for me. I think the reason it was comforting was because I was able in a way to finally see that the flag was a non-partisan symbol which was something that had never dawned on me before. In putting it up it felt like I was almost reclaiming the flag and I was able to see that the flag doesn't belong to any one political party. It sounds really sad to say that it was an epiphany to realize that the flag belongs to all of us, that it belongs to me, that it belongs in front of my house as much as it belongs in front of someone else's. Putting it up or not putting it up is not a statement of patriotism or loyalty, it's a very pure act."

How could an American symbol, more iconic than cowboys and apple pie, more American than even the American Bald Eagle, Mount Rushmore or the Monument, have been abducted by a particular brand of politics? How could Old Glory have become a political pawn, not just inside the beltway but throughout the entire United States?

The American flag, after all, belongs to everyone in the United States, it is a national symbol not a donkey or an elephant that carries on its back a particular political thought process.

What happened to the sentiment expressed by George Packer in the New York Times less than three weeks after 9/11? In witnessing the unfurling of tens of thousands of American flags in the wake of the terror attack, on September 30th, 2001, Packer wrote, "... the American flag now represents a national community that came under attack."

Less than a decade later why does the flag no longer represent that entire commmunity?

"There have been more conservative elements that have tried to capture the flag, appropriate the flag, even wrap themselves up in it," political commentator, columnist and writer, Steve Roberts, said during a recent conversation we had. "I don't think that is appropriate. Every one in the United States should have equal pride in the flag. The flag should be a non-partisan object"

Yet even statistics prove that the flag is, in fact, a partisan tool. According to research by Smart Politics , a website run by the University of Minnesota, House Republicans are "36 percent more likely to incorporate Old Glory into the banner of their page, with nearly half of all House Republicans positioning the Stars and Stripes as the main image on their website."

George Packer's essay in the New York Times, gives us a looking glass view into the way American citizens feelings for the flag transformed in the wake of the terrorist attacks. In the piece, "The Way We Live Now: 9-30-01; Recapturing The Flag," Packer writes that in the decades prior to 9/11 "Patriotism became the exclusive property of conservatives ... My family would sooner have upholstered the furniture in orange corduroy than show the colors on Memorial Day. Display wasn't just politically suspect, it was simply bad taste: sentimental, primitive, sometimes aggressive ... In the days that followed [9/11], we all witnessed an outbreak of civic-mindedness so extreme that it seemed American character had changed overnight. As flags bloomed like flowers, I found that they tapped emotion as quickly as pictures of the missing. To me, these flags didn't represent flabby complacence, but alertness, grief, resolve, even love. They evoked fellow feeling with Americans, for we had been attacked together," wrote the author of Blood of the Liberals.

Yet less than ten short years since Packer wrote of American flags blooming like summer flowers, Old Glory has been appropriated, perhaps misappropriated, as well as debated, argued about, and even nit-picked over.

Seven years ago, PBS Political Commentator Bill Moyers, found it necessary to write about, in other words - explain -- his decision to wear his flag lapel pin on air. Like Buckholtz, Moyers decided it was time to take back the flag.

On February 28, 2003 Moyers wrote, "I wore my flag tonight for the first time. Until now I haven't thought it necessary to display a little metallic icon of patriotism for everyone to see. It was enough to vote, pay my taxes, perform my civic duties ...,I put it on to take it back. The flag's been hijacked and turned into a logo ... as if it is the good housekeeping seal of approval. During the State of the Union, did you notice Bush and Cheney wearing the flag? How come? No administration's patriotism is ever in doubt, only its policies ... The flag belongs to the country, not to the government. And it reminds me that it's not un-American to think that war -- except in self-defense -- is a failure of moral imagination, political nerve, and diplomacy. Come to think of it, standing up to your government can mean standing up for your country."

Four years later, pin-less in Iowa in 2007, then presidential candidate Barack Obama spent days defending his decision not to wear that same metal flag pin. "I decided I won't wear that pin on my chest. Instead, I'm going to try to tell the American people what I believe will make this country great, and hopefully that will be a testament to my patriotism."

"People would certainly expect me to fly the flag because I'm a military spouse, it's just that I would never have expected it of myself," says Buckholtiz, who grew up in suburban DC as far away from military culture as one could imagine. Now, eight years into her status as a military wife, she writes a column for Slate, Deployment Diary: Notes from a Military Wife. "I valued [the flag] as a symbol but it didn't have personal meaning for me as a symbol. What I see now is that the flag is a pure symbol; it's not weighted. There are no assumptions hampering it, weighting it down. It is a very simple expression of something profound."

I still haven't decided whether I will fly the flag. But thanks to Alison Buckholtz, I know that all that's important is that I know and believe what is in my own heart. And, since I live in the United States, I am lucky that I have the freedom to share or not share those thoughts with my neighbors and my nation.