WASHINGTON -- Each year, on the last Monday of May, millions of Americans ditch work to hit the beach, light up the barbecue or catch a ballgame in honor of those who died serving our country. To top it off, we typically get paid just as if we'd clocked in for the day -- not a bad way to kick off summer.

That is, unless we happen to work on the bottom rungs of the economic ladder. Compared to their better-paid counterparts, American workers in low-wage jobs are vastly less likely to get paid holidays through work. That means come Memorial Day, they face a downer of a choice: Either show up and work the shift, or forgo a day's pay in order to relax on the holiday.

Among private-sector workers whose pay falls in the bottom quartile, not even half enjoy access to paid holidays, according to the most recent estimates from the Bureau of Labor Statistics. Yet more than 90 percent of workers in the top quartile receive such benefits.

Here's a graph of the data by The Huffington Post's Alissa Scheller: 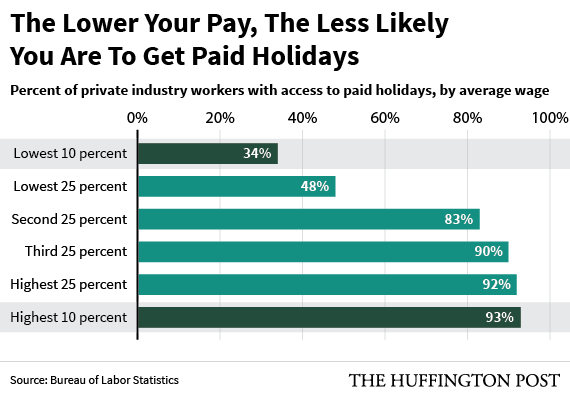 The inequality should come as little surprise. Paid holidays are a form of compensation, just like wages, health coverage or a 401(k), and low-wage workers tend to get weaker benefits on the whole than middle- and high-income earners. In fact, as you drop down the income scale, workers become less likely to have any form of paid leave at all, be it sick days or vacation time.

Most other advanced economies don't have the same disparity, because they have laws mandating that businesses provide workers with paid time off. This is most true when it comes to vacation time. In an analysis of laws in 21 countries that are members of the Organisation for Economic Co-operation and Development, the Center for Economic and Policy Research, a left-leaning think tank, found that all but the U.S. guarantee at least some paid vacation.

John Schmitt, a co-author of the report who's now research director at the Washington Center for Equitable Growth, told HuffPost that the lack of mandates in the U.S. hurts low-income workers more than anyone.

"We have a system that's voluntary [for employers]," Schmitt said. "After several decades, it has not worked. It leaves large chunks of disproportionately low-wage workers without the basic things we consider part of a decent job."

In recent years, several bills have been put forward by Democrats that would force businesses to offer workers paid time off. One introduced by Rep. Alan Grayson (D-Fla.) in 2013 would have required large U.S. employers to provide workers with paid vacation. Republicans in Congress, however, have been reluctant to place any mandates and their attendant costs on businesses, making such a bill a non-starter. Even Democratic support for Grayson's proposal was dismal, with zero co-sponsors listed.

That's not to say members of Congress don't support paid holidays in their own way. Both the House and Senate will observe Memorial Day on Monday, then be on recess in home districts through the rest of the week.

WikiMedia:
"You will never do anything in this world without courage. It is the greatest quality of the mind next to honor." -- Aristotle
WikiMedia:
"Memorial Day this year is especially important as we are reminded almost daily of the great sacrifices that the men and women of the armed services make to defend our way of life." -- Robin Hayes
WikiMedia:
"A man's country is not a certain area of land, of mountains, rivers and woods, it is a principle and patriotism is loyalty to that principle." -- George William Curtis
Advertisement
WikiMedia:
"True patriotism isn't cheap. It's about taking on a fair share of the burden of keeping America going." -- Robert Reich
WikiMedia:
"Guard against the impostures of pretended patriotism."- George Washington
Vietnam Veterans Memorial
WikiMedia:
"If we love our country, we should also love our countrymen." -- Ronald Reagan
Advertisement
Getty Images
"True patriotism hates injustice in its own land more than anywhere else." -- Clarence Darrow
WikiMedia:
"The highest patriotism is not a blind acceptance of official policy, but a love of one's country deep enough to call her to a higher plain." -- George McGovern
WikiMedia:
The greatest way to live with honor in this world is to be what we pretend to be." -- Socrates
Advertisement