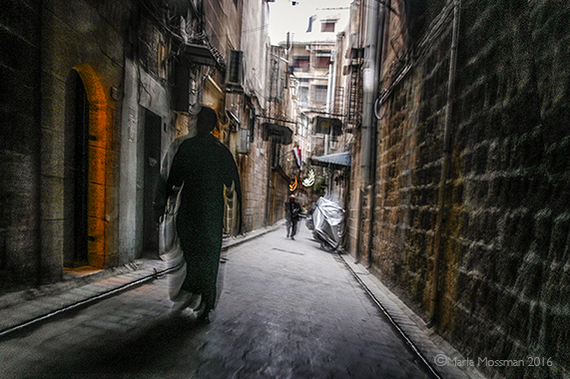 Old City Street Aleppo, Syria The Turkish taxi driver pulled over as he frantically waved to the passing car to park on the gravel shoulder of the Kilis Antakya Yolu freeway somewhere between Sanliufa, Turkey and the Syrian border. With a screeching halt he bolted out of the taxi and ran ahead towards the now stopped car, leaving me inside, alone. The silence was serene. Surrounded on all sides by the rocky savanna, I watched, the pantomime take place before me. The square shaped man whose car with the Syrian license plates handed a long narrow carton of cigarettes to my taxi driver, who raised his hand pointed directly at me. Then, in unison, they walked towards me in the taxi. It became clear that I was traded for a box of cigarettes. Sure enough, the plan was for Muhammad, the Syrian, to take me to Aleppo. I requested to see his drivers license and then wrote the number and his name on a piece of paper and gave it to the Turkish man. This exchange of licenses was my only protection. 5 hours earlier I had given the Hotel El Ruha's manager, in Sanliurfa, the taxi driver's license number, when I hired him for the half day trip to the Syrian border. These two pieces of paper would be the only link to my whereabouts if I were to come into any danger. My trust lay with the three men.

Muhammad and I listened to a mix of Turkish and American pop music from his tiny car radio for the hours drive to Kilis, Turkey's transit city on the Syrian border. Muhammad waited for the one and half hours it took to process me through Immigration and Customs check points. Once cleared, we drove two more hours through miles of barren fields, exhausted after the fall harvest, colored in the monotonous muted browns of late Autumn. Here and there a spindly minaret and a clump of homes formed into distant villages. Eventually the open spaces condensed into the burnished metallic of the industrial towns of Northern Syria. We finally came to a stop at a cul-de-sac just outside of Aleppo's Old City. Muhammad pointed to a narrow alley that apparently lead to the Biet Wakil, Aleppo's first boutique hotel, which I had booked from viewing the gorgeous photos of this 16th century mansion. After paying fifty bucks and a small tip for the drive, Muhammad gave me a cheery good bye. I felt a warmth and honesty that was to reflect the Syrian people. Trust in myself and in the goodness of "others" allows me to travel alone, relying on my instincts and non verbal cues. 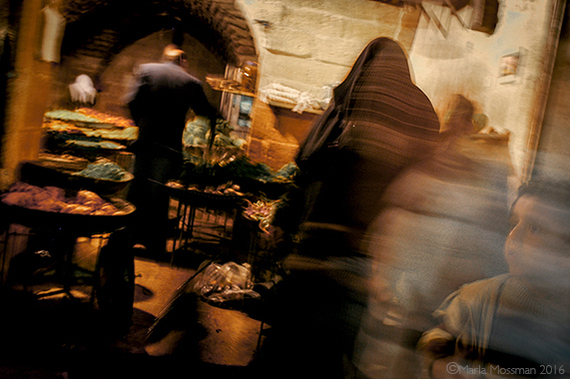 Again, this goodness in people proved right when I learned that I had arrived a day early, victim to my new laptop's internal clock on NY time. "No worries" the burley, round faced manager, Habib bellowed, "We'll take care of you very well". As he smiled, he began to look more like Zero Mostel, the famous American movie actor. "We'll have dinner together and whatever you don't like you won't have to pay for!" And, with a big barrel laugh, he takes me across the stone courtyard to the tiniest room on the second floor, in this once grand home. That night, the more we drank Akvavit, the Scandinavian aperitif flavored with dill, the louder we sang. Habib, being a Coptic, educated in London, knew all the lyrics To 'Fiddler on the Roof'. There in the Al Jdeideh, Armenian district, Habib became Tevya singing; "If I were a rich man, Daidle deedle daidle..." Together, we dinned on some of the finest dishes of the Syrian cuisine: sheep milk, Labneh; the silky smooth fresh garlic paste, Toum; along with the city's famous Lamb meatballs & cherry sauce, Kabab bil Kara. It all lived up to Aleppo's reputation as some of the best cooking in the Middle East.

The next day, walking through the Al Medina souk, shopkeepers would run up to ask why there were no American's coming to Syria. This historic souk, one of the oldest and longest covered markets in the world, seemed like a suburban mall, filled with locals, doing their daily shopping, as well as tourists from everywhere, except North America. It was difficult for me to respond honestly, and say our President, George W Bush, had just declared your country part of the "Axis of Evil". I believe that as a tourist, I am an ambassador for Peace, I told them "oil prices are very high in America, no one could afford to come to Syria." With sad faces they shrugged their shoulders and accepted my answer as truth. 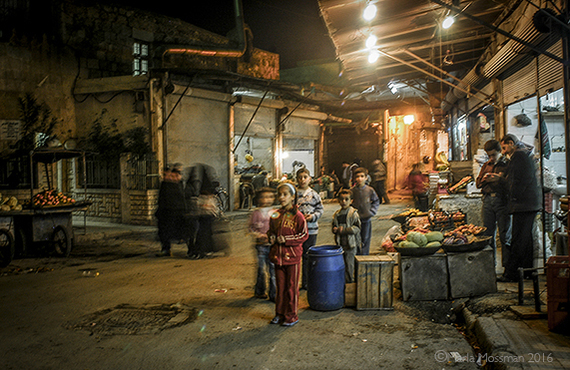 Children at the Night Market Aleppo, Syria That was November of 2007, when I was traveling by myself, on this journey through the Middle East, to document the origins of the Abrahamic religions from Turkey to Israel. One of the highlights was my stay in the biblical city of Aleppo and to live within the Old City walls to imagine life as it may have been in 2nd Century BC. Within, I was confined to navigating the narrow winding streets, designed to confuse a stranger who might wander in with evil intentions. The intricate maze served as protection. Ariel views were from the third storied rooftops, or the minarets and church steeples which provided a higher spiritual point of view. The earthly perspective from within the walled lanes revealed only a thin slice of the celestial sky, a sliver of blue by day, dissolving into the dark shadows by night. Hidden behind these walls were the inner courtyards of private mansions that revealed a personal vision of the heavens.

I was that stranger, arriving without an escort or guide and going it alone seemed to be no problem. Habib admonished me of my fears; "any local person kidnapping a foreigner will be hung!" His finger looped around his face, as if placing a noose over his neck, his head falling to touch his left shoulder. Looking at me sideways, he said, "They'd be dead, no trial" With Habib's reassuring demonstration, I felt safe to wander without direction though the puzzling lanes of the Old City. The baker on the corner of Sisi and Al Telal Street and, the Bell Tower of the Armenian Forty Martyrs Church became my landmarks so I could find my way back to the Biet Wakil each night. 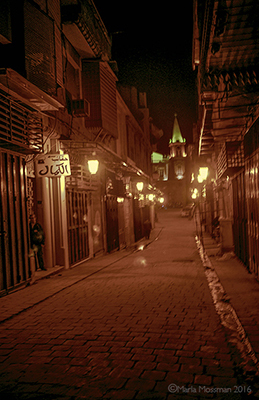 Armenian Orthodox Church at Night Aleppo, Syria I was not afraid. Everywhere I went, I witnessed families walking together, women adhering to the Islamic dress codes: the Hajab that covered their heads, neck and chest, others wearing the Niqab which had slits opening for the eyes, the Abaya covering their bodies. I covered my head and dressed modestly, to follow their customs. I imagined how these close knit extended families formed like-minded communities and lived much as their ancestors had lived. Each feeling the comforting press of their traditions. With limited education and limited views these restrictions lent for little experience of the outside world. 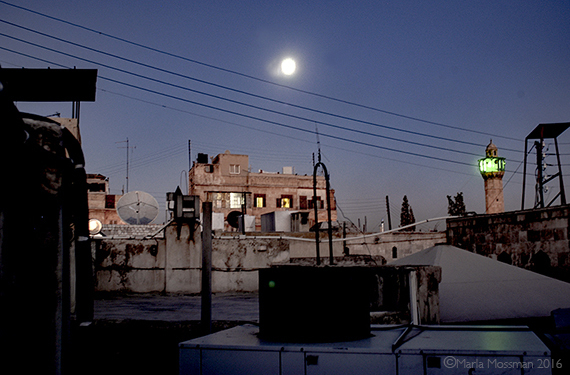 Rooftop View Aleppo, Syria Now, in 2016 we live in uncertain times!!!!!! The Jdhedah district, the Al Madina souk have all been destroyed. Rebel Occupied East Aleppo, is of pivotal strategic importance to the 5 year civil/proxy war. The Syrian government and its Russian ally have massively intensified air attacks, targeting Aleppo's civilian neighborhoods. 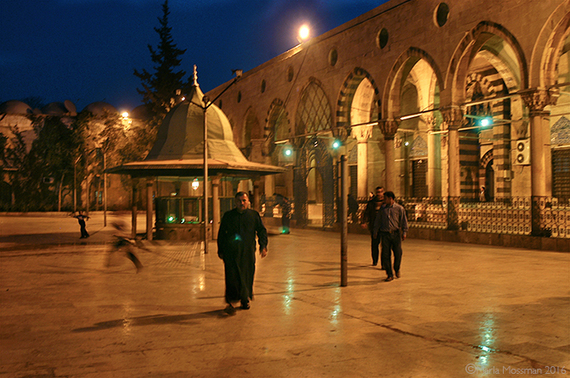 Great Mosque Aleppo, Syria The appalling tragedy is about to get worse. Our values for humanity have an eternal impact on all civilized society. We've witnessed the displacement of millions of people. Watched as they became refugees, their homes and villages destroyed. Today, living in New York, I feel we are all similarly secluded. On the streets, I see people walking, waiting, heads bent down, eyes locked onto their phones oblivious to those around them. Like the old and confining alleys of the ancients cites , the canyons created by the giant buildings that rise from our urban metropolises form barricades to the world at large, preventing us from forming omniscient global views to openness and diversity.

To escape the confines of our interior walls, Curiosity and Empathy is the way out!

My motto is "Trust is the currency of the Solo Traveler."

Marla Mossman is an international filmmaker, photographer, artist and the Founder and Director of the Peace Caravan Project