On Tisha B'Av, Sunday, June 26, the former residents of Gush Katif are remembering -- in addition to the destruction of the Jewish Temples in Jerusalem -- the homes they were forced to leave behind 10 years ago in the southwestern edge of the Gaza Strip. Uprooted from their homes during Israel's unilateral 2005 Disengagement, memories of life in the sandy strip are still painfully strong for those 9,000 residents.

"I miss the sea and I miss my home," said Hodaya Giat, 28, whose sad eyes echo her spoken sentiment. 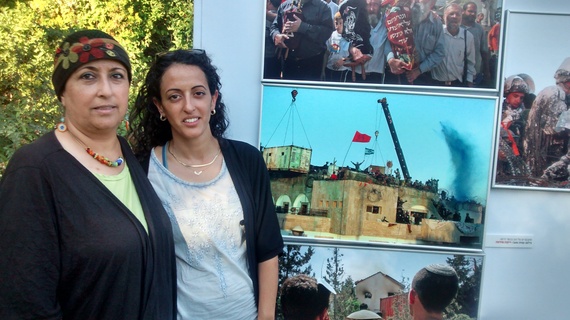 "I can still remember who I was there; today I have this strange feeling of detachment," Giat told Tazpit News Agency in an interview. "I'm still searching for myself, trying to find my place" explained Giat, who studied human resources in college and works as a cashier at a supermarket today.

"All my childhood was erased, my home destroyed," said Giat, who lived with her family in Kfar Darom. "And no one stopped it from happening. We couldn't stop it."

Following the late PM Ariel Sharon's announcement of the Disengagement Plan in December 2003, residents of Gush Katif led a massive state-wide campaign to stop the expulsion, which was eventually carried out nearly two years later on August 15, 2005.

"Imagine if this happened to you, that your home was destroyed?" asks Giat. "We are simple people, people of faith and Zionistic ideals. Our community saw Ariel Sharon lay a foundation stone and then he and his government destroyed it."

"It's so hard to understand even today," she said. Four communities in northern Samaria were dismantled during the Disengagement while in Gush Katif, the destruction of 1,900 homes, 400 farms, 88 educational facilities including day care centers, kindergartens and high schools and 38 synagogues took place.

The community that Giat grew up in, Kfar Darom, had a long history of Jewish residents living in the area before the State of Israel was established. In the 1930s, the Jewish National Fund purchased land in the area from a citrus grower by the name of Tuvia Ziskind Miller. The area was settled in 1946 and a kibbutz was formed called Kfar Drom after the Jewish village that stood there in the Mishnah period, according to the Gush Katif and Northern Samaria Commemoration Center website. In 1948, the Egyptian army attacked the kibbutz and destroyed it during Israel's War of Independence. By the end of the war, Egypt captured the Gaza Strip and controlled it for nearly the next 20 years.

Following the Six Day War, Kfar Darom was re-established in 1970 as one of the many Israeli agricultural villages in the strip.

"The security situation wasn't easy," recalled Giat. "There were many terror attacks. We could have left during those difficult times but we didn't."

In one of the worst attacks, in November 2000, a Palestinian roadside bombing targeted a school bus full of children from Kfar Darom, which killed two adults and crippled three siblings for life, causing them to lose their limbs in the attack. In response, Kfar Darom built a school within the community.

"There was a special spirit in Kfar Darom despite the hardship," said Hodaya's mother, Orna. "We were always rebuilding, continuing on with our lives. Our connection to the land was so strong."

Today, Hodaya Giat and her family live in Shavei Darom, Returners to the South in Hebrew, a community made up of 20 Kfar Darom families in the Merhavim Regional Council, which is located in the northwestern Negev.

"I still wait to return," Hodaya Giat told Tazpit. Ten years after the Disengagement, she and her family, like countless Gush Katif families live in temporary housing units, known as caravillas. "I still have hope that someday we can return to the beaches, to our homes."

But her mother thinks differently. "I don't have the strength to go back, even if it was a possibility" says Orna Giat. "We gave everything to this country during our time in Gush Katif. I leave this hope of return to the next generation."