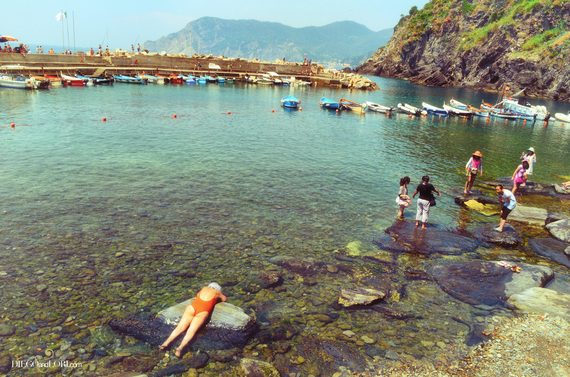 The Little Italian Village That Could

With the long winter lingering, my memories return to a quick jaunt from Spain to Italy last summer. Having visited Italy in the past, my favorite traveling companion and I decided this time to venture to Cinque Terre, which consists of five little picturesque villages on the northwestern part of Italy.

We live in Spain, so after a two-hour Ryanair flight from Valencia to Pisa (about $80 roundtrip) we then took the train (TrenItalia) to the Italian Riviera. It cost a nominal fee of $13, and took only about an hour and a half. The train from Pisa goes through La Spezia Centrale, where we caught a local train to our destination; quickly jumping between villages is quite easy.

In Cinque Terre, tourists usually spend a day hoping from one village to the next, but we wanted to feel what it would be like to live there. As each village has its own persona, we chose Vernazza because it has been reported by many, including Rick Steves, to be the loveliest of the villages with an ancient castle, pastel-colored cliff-hanging homes, an inner port and a small intimate seaside church.

For centuries, the port of Vernazza had been a maritime base, fending off pirates from behind its high walls. In the 1800s, a new train line connected it to the rest of Italy, and wine production escalated and the population increased. However, it faced many ups and downs, between pirate invasions and ill-used agriculture. Perhaps the town should be called The Little Italian Village That Could!

In fact, it wasn't until a few days before we left that we learned Vernazza had been hit hard by massive flooding and mudslides on October 25, 2011. With over $135 Million in damages, the village was still recuperating two years later. Upon arriving, we saw a large poster that shares the story of the catastrophe with tourists. Seeing these powerful portraits of the locals recovering from the disaster helps to understand what they have been through.

Our accommodations were in the opposite direction from the harbor in the upper part of Vernazza. We walked to the Little River that runs through the town. Now it was calm, moving as it always has, peacefully and quietly. One lingering sign of the massive damage the river had caused were the still unfinished walkways to pass over to the residences.

According to Michèle Lilley, a native Californian who lives in Vernazza, the devastation was "A powerful force of nature that ripped out the guts of town, the insides of our lives and left them lying scattered in the street." Michèle Lilley, Ruth Manfredi and Michele Sherman founded Save Vernazza, which was a humble attempt to help Vernazza recover from this natural disaster. Two years later, they have over 2,000 supporters from all over the world helping to rebuild the town.

We stayed at Camere Fontanavecchia di Annamaria Meregoni, which is a lovely little hotel. We were welcomed by Annamaria's mother who passed her time with friends outside on a bench or on her balcony overlooking the hotel. Our room was spacious, quaint and clean, and required no air conditioning, as a light breeze and ceiling fan kept us cool.

Across the way is a delightful Sicilian cafe, Il Pirata delle 5-terre, where we had coffee and pastries along with free Internet each morning. The twin owners made our visit pleasant by chatting with us in English and making their home feel like our home. We met a lovely retired couple and photo enthusiasts from the U.S.A. who had been traveling for months and were at the end of their trip. They stayed longer than planned in Vernazza because they fell in love with the place.

Later that morning, we hiked up the mountainside to get a view of the port below. Walking this steep slope in the scorching sun, we were happy to have finally made it to the top. This site is the centuries-old local cemetery, which enjoys one of the most spectacular vistas of the Ligurian Sea for all eternity.

From there we also got a great view of the medieval castle, Castello Doria, and the tower, Torre Belforte, which protected the village from pirates for centuries. The castle was named after a prominent Genoese family who took part in forming the Republic of Genoa and helped finance many Spanish and Portuguese expeditions, including Christopher Columbus.

We headed back to town, following the shops and galleries running along the main street Via Roma to the main square, Piazza Guglielmo Marconi. The shops all cater to tourists, selling gifts, clothing, art and specialty foods you can take home.

For lunch, we took fresh panini sandwiches from The Lunch Box through a little passageway to a hidden beach on the other side of the cliffs. There were other families, both local and tourist, eating and playing in the Ligurian Sea.

After a swim, we headed to the 14th Century Ligurian gothic style Church of Santa Margherita d'Antiochi, the anchor of the village. Inside, it is rather bare with only a few ornate elements. The emptiness reminded me a bit of the suffering this town has foregone.

At night, we opted to go to Antica Osteria il Baretto, a restaurant recommended by a local. It doesn't have a spectacular view of the harbor like some of the other restaurants, but it was right in the center of the village, where we sat on the outside terrace. We were assured the food was delicious; we were not disappointed. I had a delectable mussel appetizer and penne bolognese along with some local wine; delicimo!.

Afterwards, we were craving Italian gelato. There are three gelaterias in town, but we found Il Porticciolo as we walked along the harbor. Filled with children waiting for their scoops, we finally got our scoops of the creamy, scrumptious dark chocolate and strawberry fragola. We savored it while looking at the glimmering lights of the harbor.

Following some lovely music, we found a little bar, The Blue Marlin, where a guest singer was entertaining. We sat down, met a couple from Australia and enjoyed the beauty of the woman's voice that had lured us through the village. People were laughing and applauding and we knew it was a special moment, a memory that would be engrained forever while battling long winters.

Despite the reconstruction, the intimate and friendly Vernazza embraced us. The shop and restaurant owners welcomed us to enjoy as they do the many gems Vernazza has to offer.