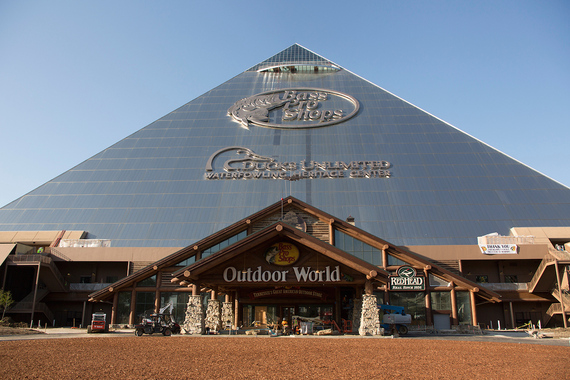 Over the past five years Southern cities like Charleston, Greenville, Raleigh, Nashville, Savannah and Richmond have enjoyed remarkable economic comebacks and garnered enviable interest among tourists and the travel media. Yet, despite a wealth of attractions, Memphis has lagged behind other Southern cities in creating any sense of evolution and self-image. Memphis even lost its beloved namesake historical monument--the World War II B-17 bomber named "Memphis Belle."

Having not visited Memphis in at least a decade, I returned this summer to sense that the city is really on the verge of a cultural and tourist boom that goes way beyond the requisite pilgrimage to Elvis Presley's cheesy Graceland home. Which is why I'm planning on writing three articles on the city; there's a lot to crow about now, and the city fathers seem to have a lot of momentum going.

Memphis has always had a solid business, educational and medical base, with FedEx, AutoZone and International Paper headquartered here, 35 colleges and universities in the area, and three major hospital systems, as well as the world-renowned St. Jude Children's Hospital. The population tops 700,000 (20th in the U.S.), second only to Nashville in the state.

For a century now Memphis has been known as the home of the Delta blues, of which I shall say more in my next article, although the stretch of Beale Street famous for its blues history has still yet to return to the kind of vitality it should have. 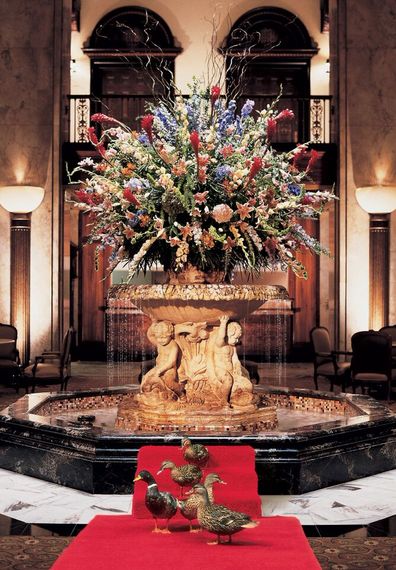 I checked into the beautiful Peabody Hotel, which like most landmarks these days was once in danger of being torn down. Instead it is as polished and stately as ever, its rooms renovated with all the most modern amenities. And, as it has twice a day since 1940, it still holds the beloved march of the Peabody ducks (above), whereby the waddling fowl, led by a red-coated, gold-braided duckmaster, march from their rooftop domicile down an elevator, over a red carpet and into the lobby's magnificent marble fountain; they then retrace their steps, and the hotel swells with applauding onlookers.

Walking around downtown, I saw the clear evidence of reclamation of once-derelict buildings, not least The Chisca Hotel, opened in 1913 and now in the process of a multi-million-dollar rehab as an apartment building. Its enduring claim to fame was that there, on July 7, 1954, WHBQ disc jockey Dewey "Daddy-O" Phillips played Elvis Presley's first record, "That's All Right, Mama."

The grand old Orpheum Theater, dating to 1907 as a vaudeville house then later as a movie theater, was saved from demolition and, since 1977, has served as host to touring Broadway shows and concerts by top performers like Tony Bennett and Harry Connick Jr. 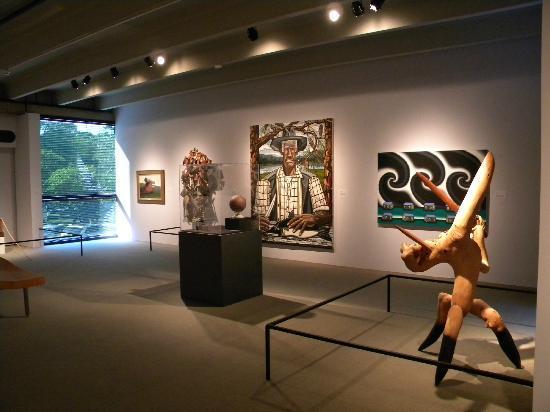 The Memphis Brooks Museum of Art (above), founded 1916, has an admirable collection of Italian Renaissance and Baroque, French Impressionists and 20th century artists. Near the Peabody Hotel there is also the Belz Museum of Asian and Judaic Art (1988), sometimes called "The Jade Museum" for its extensive collection of Asian jade art. The Dixon Gallery and Gardens (1976), on 17 acres of landscaped gardens, focuses on French and American impressionism, including Monet, Dégas, Cassatt and Rodin. In addition, there are a Children's Museum of Memphis and an eminent science museum called the Pink Palace, with a replica of the original 1916 Piggly Wiggly store, America's first self-service grocery. 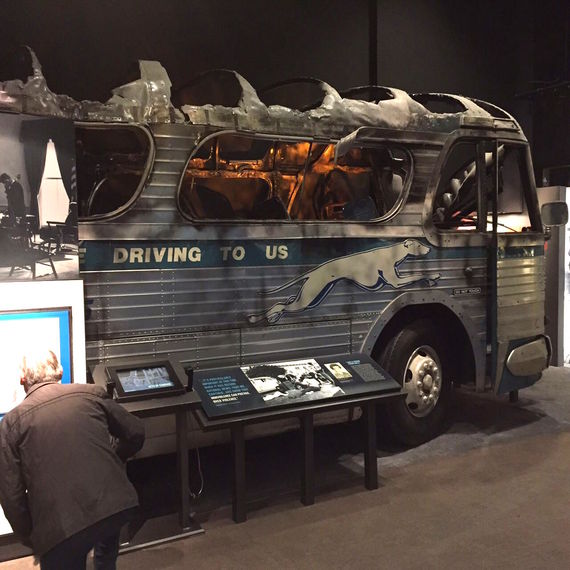 Beginning in the 1960s, Memphis became a crucible for Black-American civil rights, and in 1968 a city sanitation workers' strike met with resistance by the city officials, which attracted Rev. Martin Luther King Jr. of the Southern Christian Leadership Conference to the cause. It was at the Lorraine Motel that he was assassinated by a sniper on April 4, 1968, one day after delivering his magnificent "I've Been to the Mountaintop" speech at the city's Mason Temple.

The very room--untouched and preserved--wherein King had breakfast before being shot is in the motel, which is now attached to one of the finest museums of any kind in the United States: The National Civil Rights Museum. It is an extraordinary example of what a history museum should be--an experience as well as an education--from the claustrophobic room that shows the horrors of shipping African slaves to America to the shocking, unrestored bus bombed and set aflame during the Freedom Rides of 1961. There's also the bus on which Rosa Parks refused to sit in the back, and footage of the disgraceful abuse heaped by white citizens on the lunch-counter sit-ins.

The sounds, the songs, the screams are all there, including a recording of the phone conversation between King and President Lyndon Johnson over passage of the Civil Rights Act, and the joy of great achievements, too. I was devastated by a very small part of the exhibits: a little glass box of two children's dolls--one white, one black--used in a psychological experiment in which little black children were asked to choose which one they preferred. Many chose the white doll, because it was "prettier" and the black doll "ugly." 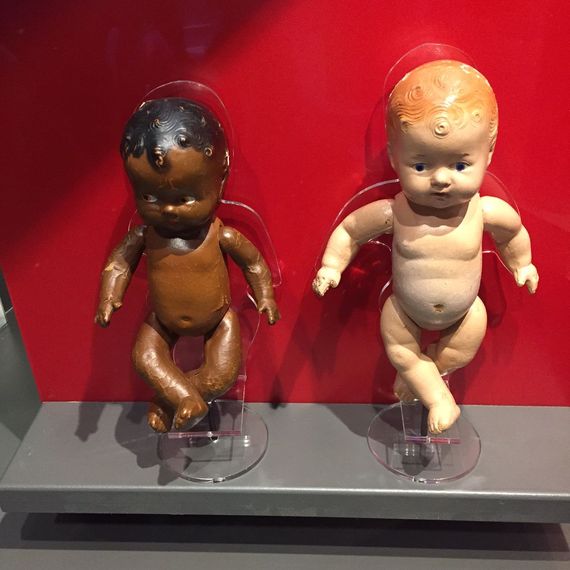 This and so much, much more distinguishes this museum, but when you climb to the second floor of the old Lorraine Motel and see King's unmade bed and breakfast dishes, then look out on the balcony across to where James Earl Ray fired his rifle, your heart stops. The National Civil Rights Museum is one every American and every foreign tourist should visit if the struggle for human rights is ever to be understood. It is a testament to bravery and the human spirit of both blacks and whites and shows how far and honestly Memphis has come, even if it took much too long.

In contrast to the solemnity of the museum, the brand new Bass Pro Shops at The Pyramid is a mind-boggling form of imaginative architecture, hotel design, entertainment and commercial fantasy à la Las Vegas. What began as a disaster has been transformed into the city's newest grand attraction. Back in 1991 this huge Pyramid (supposedly the world's sixth largest) was a sports arena, later host to the Memphis Grizzlies, who moved in 2004 to FedEx Forum, leaving the vast space empty and something of an embarrassing eyesore on the river.

Only a decade later did Johnny Morris, owner of Bass Pro Shops, see the vacant hulk as an opportunity to create something never done before. Pouring $190 million into the project, Morris brought the forest inside, along with interior rivers, fake cypress trees, stuffed wild animals, real fish, and the world's tallest freestanding, 32-story-high, neon-lighted elevator with observation deck. He also added floors of retail space and a spectacular hotel called the Big Cypress Lodge, where I spent one night in a room that mimicked a great Western camp cabin, replete with deer heads and water fowl. Rustic in looks but wholly up-to-date in amenities--king-sized beds, spacious bathrooms, working fireplaces--the hotel, though windowless to the outside, has plenty of atmosphere (below).

Memphians, as they are called, can certainly claim that no other state in the Union has anything quite like The Pyramid or any museum as inspiring as the National Civil Rights Museum. It also has three museums--one the still-in-operation Sun Studio where Elvis, Johnny Cash, a`nd Jerry Lee Lewis all recorded--devoted to American music and a burgeoning food scene, all of which I can't wait to tell you about in coming issues of the Virtual Gourmet.