"In the quest to identify the roots of rock `n' roll, all roads lead to Memphis."--Smithsonian Institution 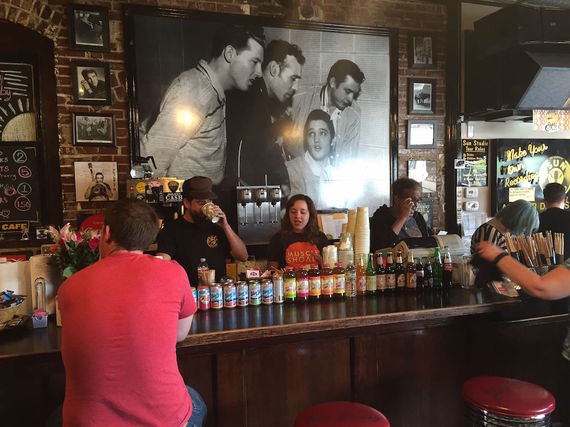 All you need to do to get a sense of the extraordinary depth of Memphis' enduring music culture is to stroll down Beale Street, look down and, step by step, read the names on the brass plaques in the cement: W.C. Handy, B.B. King, Alberta Hunter, Robert Johnson, Albert King, Elvis Presley, the Staple Singers, Jerry Lee Lewis, Otis Redding, Sam and Dave, Justin Timberlake, and 125 more--all of whom were born in, lived in or recorded in Memphis over the past century. Few cities could claim anything like such a group of musicians as influential as these, and no other city can claim to be the crucible of the Delta Blues.

Beale Street was once central to Memphis's music scene. Bands played on the street as early as the 1860s, and by 1890 Beale had a Grand Opera House (later called the Orpheum). By the 1940s jazz and blues clubs lined the street; B.B. King was called "The Beale Street Blues Boy." In 1977 an act of Congress declared Beale "Home of the Blues."

But as early as the 1960s Beale Street was caught in the city's downward spiral, with most buildings on the street boarded up over the next decade. Misguided redevelopment plans followed and sputtered, so that even though Beale Street (above) is still a prime entertainment attraction for tourists, there's been little left to suggest this was ever the true Home of the Blues. This is about to change: The re-opening of The New Daisy, previously a 1937 movie theater, brings higher profile acts than in the past, with a balance of rock and roll, country and western, and hip hop, in partnership with Live Nation and Disco Donnie, and the renovation of The Palace Theater as a concert and events hall is now underway. And just this month The Memphis Music Hall of Fame has opened on Beale Street.

Fortunately, there are other thriving venues in Memphis that bespeak the city's indelible influence on American music. It is never wise in Memphis to speak in less than hushed tones about Elvis, but a visit to his Graceland mansion sheds little light on the breadth and depth of the city's musical heritage. But there are other places.

Foremost, perhaps, is Sam Phillips' Sun Studio (above), which holds tours while still operating as a recording studio that looks pretty much the way it did when Jerry Lee Lewis, Carl Perkins, Elvis and Johnny Cash recorded here. In fact, there's a photo behind the entrance counter (left) of the only moment when the three of them were in the studio together. Carl Perkins, Roy Orbison and others made their first recordings here, and the place is decked out with an astounding array of memorabilia, including rare 45 RPM wax cuttings, album covers, microphones and guitars. (One caveat: Although I was assured by a Sun Studio spokesperson that the premises are "fully up to Fire Code" and has three exits, the building is grandfathered, so there are no water sprinklers in the often-crammed recording studio.)

Stax Museum, though not a recording studio (the original was torn down), is in every way as important as Sun Studio, for it was here that many of the greatest sounds of soul music were created by artists like Otis Redding and Sam and Dave. Operated by Soulsville USA, which also operates the adjacent Stax Music Academy, this is a splendidly modern, well-lighted museum, and its exhibits recreate an old Southern church where the sounds of soul germinated in gospel music's fertile spirit. The Wall of Sound is an array of thousands of the seminal soul music 45 RPM records through 1975, and there is a replica of Stax's original recording studio, dozens of outfits and guitars of the stars, and even the astonishingly glitzy 1972 gold-trimmed Cadillac Eldorado that Isaac Hayes was given for the success of his music in the movie "Shaft."

The beginnings of Stax (below) were due to Jim and Stewart and his sister Estelle Axton, founder of Satellite records, who moved and expanded into a Memphis movie theater in 1960 as Stax Records (a combo of their names). The first big hit was "Cause I Love You" by Rufus and Carla Thomas in 1960, and they kept coming fast--Booker T. & the M.G.'s "Green Onions," Carla Thomas's "Gee Whiz," Sam and Dave's "Hold On, I'm Comin'"--all of them available to listen to in the museum, along with video recordings of the artists' performances. 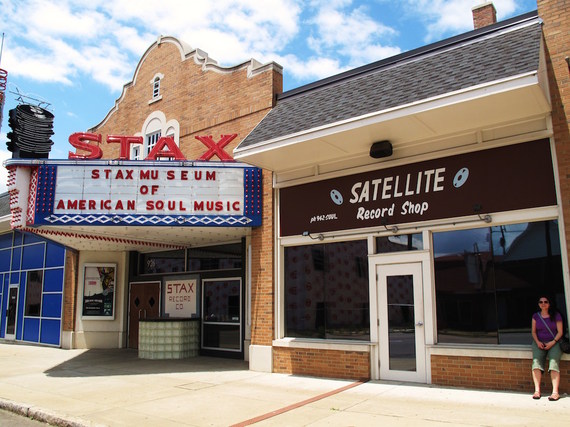 If these two venues were not enough, there is also the Memphis Rock n' Soul Museum (below), on Beale Street, set over seven galleries that document in the most lively way the history of rock n' roll in all its forms, from the field hollers of 1930s sharecroppers to the rock and soul music out of Sun Studio and Stax, to the global reach of rock n' roll today. The museum's digital audio tour guide holds five hours of information, including over 100 songs, and there are more than 30 instruments, 40 costumes and other musical treasures.

The museum was developed in connection with Washington's Smithsonian Institution and the National Museum of American History, so you know everything has been done with impeccable credentials behind it. Certainly equal to Cleveland's Rock and Roll Hall of Fame and Museum and far richer than Portland's Rock & Roll Hall of Fame, the Memphis institution eschews mere spectacle in favor of true historicity.

Not done yet? Memphis is also home to the W.C. Handy Home & Museum, dedicated to the "Father of the Blues" (below) and you can take a tour of the factory of Gibson Guitars, which for a century has turned out the stringed instruments that drove American music, both acoustical and electric. 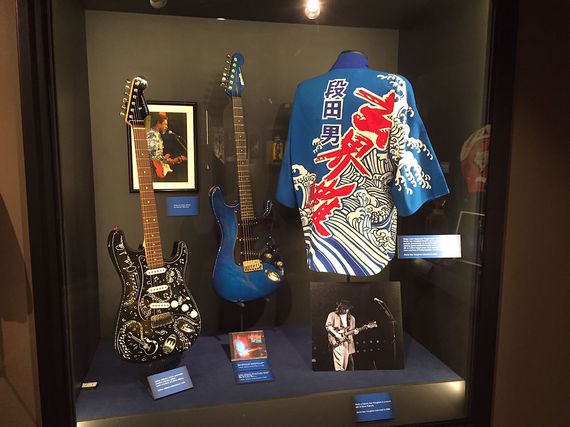 Brand new this May is the Blues Hall of Fame (above), opened by the Blues Foundation, just across the street from the National Civil Rights Museum. The hall is committed to preserving and celebrating America's indigenous music, ever mindful of how many of the great artists, like B.B. King this year, have been lost. Induction into the Hall of Fame can be in any of five categories: Performers, Individuals, Classic of Blues Literature, Classic of Blues Recording (Song), Classic of Blues Recording (Album). The exhibits are dazzling--that's Stevie Ray Vaughn's guitar and shirt at left; the preservation of the music, some of it dating back to the earliest recordings, means we will always have it, and the sheer musicianship and variations on the blues are staggering, from Delta Blues (which began in Memphis) to the Chicago Sound, the Detroit Sound, Texas Blues, West Coast Blues and British Blues. It's all here in rousing profusion.

There are American cities with more art museums and natural history museums than Memphis, but none has the cultural breadth and depth of museums devoted to American musical history. Along with Nashville's Country Music Hall of Fame, Tennessee can claim bragging rights no other states dare. Now, if Memphis can only bring back real blues and rock to Beale Street, everything will be cool again.