Are men funnier than women?
Can women be funny?
Are we entering a new era of funny women?
Do women have to work harder to be as funny as men?

That loud banging noise you hear every time one of these or similar questions are asked is the collective sound of actual, real-life funny women slamming their heads against whatever hard object they can find.

We're not ones to complain about scientific research, but when we read the recent study measuring the relative humor of men vs. women by the University of California San Diego, we couldn't help but ask, "Why?"

Actually, to be completely honest, we asked, "Why the F*CK?" but same thing.

The New York Times reported on the study in its story, Seriously, Men Only Think They're Funnier, and various other media outlets have picked it up as well, collectively dropping the bombshell that men aren't really funnier than women, they're only an eensy, teensy, weensy bit funnier (i.e. almost exactly as funny).

Meta translation: Hey, ladies who think you are funny? Science says you're right. You're welcome!

But it's the very premise of the experiment, and its subsequent validation in the media, with which many funny people take issue. Perpetuating the concept that a person's ability to be funny is based largely on their gender is insulting to those who practice the art of comedy, both male and female.

On top of that, every time a funny woman or woman-helmed project gets attention, it is heralded as a sign that women might be funny afterall (see Tina Fey, Bridesmaids, 2011's fall television lineup). For women in comedy, success is treated either like the exception to the rule or the opening of some kind of Pandora's box, but in a good way.

Thanks in no small part to Johnny Carson and Christopher Hitchens -- two people we appreciate in most other ways -- we may never be able to burn this conversation to the ground, but it doesn't mean we won't try.

To that end, we humbly suggest that anyone who has an opinion on which gender is the one true funny one, shut up. Please. Women aren't funny. Men aren't funny. Some people are funny... full stop.

We checked in with some comedians we know who have had enough of being asked these very questions and they gave us an earful. Take a look at what they had to say, and let us know what you think in the comments. 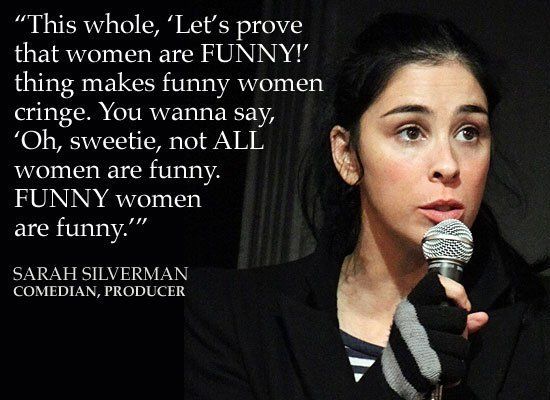