4th Estate, a group that makes infographics about trends in the media, found that men overwhelmingly outnumber women when it comes to who is quoted in the press about the 2012 election campaign — even about issues that primarily affect women.

4th Estate looked at sources ranging from print to radio to television between January 2011 and May 2012, and the results are startling. When it comes to abortion, men were quoted 81 percent of the time. Women were quoted just 12 percent of the time. Birth control? A 75-19 gap. Planned Parenthood? 67-26. The findings are even more damning when we consider the fact that all three issues took a turn dominating the political discourse during the period of the study.

Overall, the study found staggering imbalances in who news organizations turn to for expertise on the election.

It might seem logical that outlets would turn to the people who know most about a certain subject, especially if half of the population has no direct experience with said subject. Apparently much of the media disagrees.

4th Estate's findings were consistent with other studies about the lack of female representation in the media. Last month, the OpEd Project released a study concluding that men still dominate the majority of bylines on articles published in various types of news outlets. Another study, released by the National Hispanic Foundation for the Arts in February, found that Sunday morning talk shows were overwhelmingly dominated by white men. 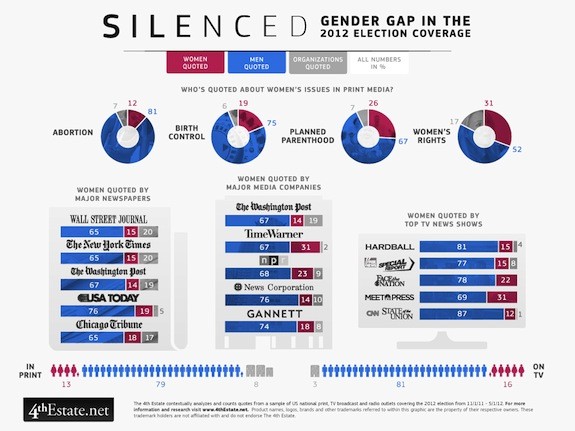