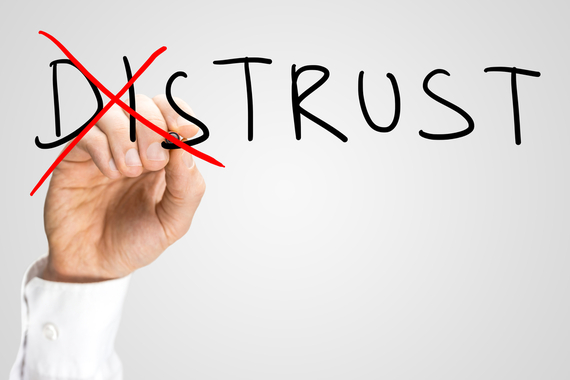 Most of my female friends have plenty of advice and suggestions when it comes to the topic of trust -- trusting their partner that is. But many guys are more silent on the issue. And some men just plain don't trust their gal's feelings no matter how long they have known her. So I decided to unlock the male psyche and query 15 of my male friends on the topic of trust, particularly what the word meant to them relating to being in an exclusive, committed relationship. Specifically, how do they go about truly trusting their partner and what do they do if they sense (and/or discover) their partner is being sexually or emotionally unfaithful? Now my research is far from scientific (valid and reliable), however, it does give you a glimpse of what a few men consider to be trust factor standards.

First, based upon my research, men DO believe a woman can be trustworthy and will work hard to gain her trust as well as to exemplify it. Many of the men I spoke to said trust was paramount in a relationship and it took time to develop. The guys seemed to gauge the trustworthiness of their partner often by watching her in a public/social setting. They watch her behavior, her gestures/body language, the way she connects/speaks/engages with other men. (Is she flirting or just being kind?) The most secure man wants to know that his gal possesses "trust integrity" -- that she is capable and desirous of protecting the trust they share (the US in trust) even when he is not in her presence. This is key!

Men know men pretty well. They know each other's predator capabilities and are alert to how other men may use it to engage with women they find attractive or interesting. Guys tend to keep an instinctual watchful eye on both their gal's behavior as well as that of their own species -- other men! Men are keenly aware of the other guy's "moves" -- often recognizing them before their gal knows she is being swooned. As one of my friends told me (when it came to trusting other men around his partner) "I will trust him with my life but not my money or my wife." Yes, men know men pretty well. Just think about it. Do you know how many bar fights were ignited over a woman? Seriously!

Almost all of the men I questioned said that communication with their partner was significant to keeping the trust integrity thriving. However, only a few admitted that they actually spent time discussing trust with their gal. Many said they didn't bring up the issue of trust unless they felt something was awry or they became suspicious of betrayal.

And how men actually responded to perceived beliefs of betrayal (or real betrayal) was based upon past experiences. One of my friends explained it to me like this: if a guy was cheated on in the past (during a previous relationship), that pain and hurt rings loud and true. He will often click into some old patterns of response without even taking time to find out the truth of a perceived or real betrayal in a new relationship. Some guys are so UNtrusting of their gals, that it sabotages a potentially great relationship. (I suppose this behavior works the same for women distrusting their guy as well.) That is why its probably best to address trust integrity before there could be a circumstance posing doubt in a man's mind.

So although its not often expressed, many men hold trust for their partner (and partnership) in high esteem and the wise souls know that trust integrity must be mutual. So guys, maybe its time to be a bit more verbal with your ladies and express how you really feel about your trust for her. They may be tough conversations to have, but in the long run may solidify your partnership and grow the 'US' in trust.