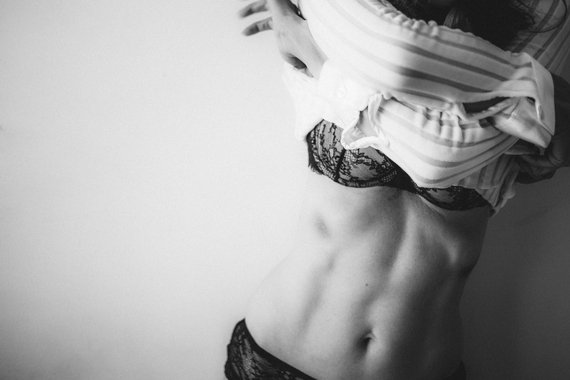 I've run a few pieces in this Sex After Menopause series, each of them documenting real-life stories of women navigating midlife sexuality. Hearing from women (in heterosexual relationships) is just half of the story, however. Men are clearly impacted by their lovers' sexual evolutions, and their experience also deserves a forum. I'm grateful to the six men who agreed to share the most intimate details of their journey through menopause with the women they love.

I married my best wife when she was 48, after 14 years with my worst wife. Had about six years of a wonderful sex life -- at last!

Then menopause hit and that was it. Sex became excruciating and libido packed up shop two years later (though sex only happened three to four times as we tried to see if there was any way to make it work). Doctors were no help. The only option they offered was HRT which she was afraid of due to the likelihood of encouraging breast cancer.

That was it. Game over. I'm eight years younger than my wife and frustrated as hell with no one to be angry at. I'm grateful to have met my wife and for the brief time where I did have a satisfying love life, but God, it's been a tough road to hoe since then. I have to say, the letters you've gotten from couples bragging about "no problems here" do read like Penthouse Forum -- unbelievable, given my experience.

My wife and I are in our early 70s, married 44 years and deeply, emotionally in love. My wife took HRT and avoided nearly all menopause symptoms, but at some point she lost interest in her own orgasms. Sex became all about intimacy and focused on my orgasm. She sometimes experiences brief pain on penetration which can be minimized by lube, gentleness, and angle.

We're slowing down, but continue to make love five or six times a month, for which I am so very, very grateful. She is a sweetie.

I'm 70 and my wife is 67. We had great sex through menopause. She was in perimenopause for many years. When she got to about 65 it started to change. Intercourse became painful for her and she developed an allergy to semen. Now intercourse is out of the question and she has no desire for anything other than hugs.

Needless to say, I'm not happy. I'm still very much attracted to her and still have desire for sex in our lives every couple weeks. I guess I should be grateful to even be alive.

I was 28 and recently separated when I met J, who was also recently separated. She was beautiful, smart, fun-loving, wise, and she had led a fascinating life. Her remarkably fit body was the result of an ongoing commitment to ballet workouts. She also was 50-years-old.

Over the next eight years, we enjoyed a wonderful life together, including a rich and varied sexual relationship. Although she had ceased to menstruate during our first year together, she never experienced a loss of libido or lubrication or the capacity for powerful orgasms. Her easy and natural sexiness was a constant inspiration to this truly fortunate man. Use it or lose it!

I am 68 and my girlfriend is 64. She is the sexiest, most orgasmic woman I have ever been with (not an especially small number as I was single in my early 30s and worked in the health care industry, where there is a high percentage of professional females).

She has an incredible sex drive, lubricates just fine (although we do use some lube), and has multiple orgasms virtually every time -- and no, she is not faking.

When her late husband died (she was 56), her gynecologist told her she was done with sex. That person should not practice medicine! She was so very wrong.

I miss intercourse but my wife did not ask for this any more than I did but we make it work, and it's usually fun! I hope some men will read this and decide there's a way to stay happy with the woman of your youth.

*All names have been changed.

*I am not a medical professional and this piece is not intended as medical advice. Please consult your physician before starting any treatment for menopausal symptoms.

If you'd like to contribute your story to this ongoing series on sex after menopause, please e-mail me at ohgoderica@aol.com.