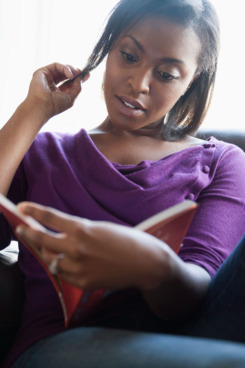 As the tides of history and gender change, it would be easy to assume that men -- recently unseated as the dominant intellects and degree-havers in the U.S. -- would adapt to a world where women are not only their equals, but often their intellectual superiors. After all, there's nothing like dating someone who makes you a little sharper. But more and more research reveals that though the thought of a smart woman is appealing to men, a real, live smart woman standing in front of them is actually a turnoff.

Related: Women in Unions Are Closer to Equal Pay Than Women Who Aren't

Researchers at the University of Buffalo, California Lutheran University, and the University of Texas at Austin published a study in the November edition of Personality and Social Psychology Bulletin that may confirm a fact we've long dreaded. In a study of 105 men, researchers proposed two scenarios. In the first, "a woman either outperformed or underperformed them in a math or English course, and then instructed the men to imagine this woman as a romantic partner." In this scenario, men more frequently gave the woman who bested them the higher ranking.

But in a second scenario, men were given an intelligence test and then told they were about to meet a woman who had done better than them on the test. Men who were presented with this proposal "distanced themselves more from her, tended to rate her as less attractive, and showed less desire to exchange contact information or plan a date with her." According to the researchers, this revealed that men felt threatened when faced with an IRL interaction with a more intelligent woman. This small sample size is definitely not conclusive -- though it is kinda depressing.

More from The Cut:
25 Famous Women on Dealing With Haters
6 Surprising Champions of Women From the 2016 Election
In Virtual Reality, Women Run the World
Here Are All the Celebrity Breakups of 2016
11 Non-Cheesy Halloween Costumes You Can Find on Amazon