I've written in the past about Thomas Costello, an Irish-born soldier who emigrated to America, lost his life serving his adopted country in World War I, and was finally laid to rest at Arlington National Cemetery in 2010. It took some sleuthing, but I was eventually able to track down his relatives from his hometown of Tuam, County Galway. But it turns out that the link to heroic Galway immigrants goes back before WWI - at least as far as the Civil War.

Thomas Joice (who sometimes went by Joyce) was one of the 16 men who went down with the USS Monitor on Dec. 31, 1862. Some years ago, I researched him for a documentary and have continued to look into his past from time to time. Though very little was known about him, I've been able to uncover a fair bit, and since I haven't seen this information elsewhere - and with the 150th anniversary of the Monitor's brief service coming up - I thought I would share some of what I learned about this interesting fellow.

At the time of his passing, he was a relative newcomer to the U.S., having immigrated sometime between his August 1858 marriage in his hometown of Clifden and his January 1862 enlistment in the Navy in New York.

Joice was both European and a fireman - factors that weigh in his favor in terms of having been one of the two skeletons found in the turret of the USS Monitor when it was brought up from the ocean floor. He was also in range age-wise for one of the skeletons, but his height -- about 5-feet-9 and a half inches and 5-feet-10 inches -- made him tall for his time and probably rules him out. Still, given that he married and had a family, Joice was one of the most promising of the 16 sailors in terms of seeking living relatives, including those who might be able to provide DNA reference samples to help determine more definitively if one of the sets of remains is indeed his.

But while I was able to trace some living relatives, Murphy's Law was very much in play in Joice's case. His brother has living descendants, but none with the appropriate Y-DNA (passed paternally) or mtDNA (passed maternally) for identification purposes. Since they shared the same paternal heritage, I also tracked down the burial place of his brother, knowing disinterment is sometimes considered for historical purposes, but his final resting place (as seen below) is unmarked - not to mention, shared with other relatives. 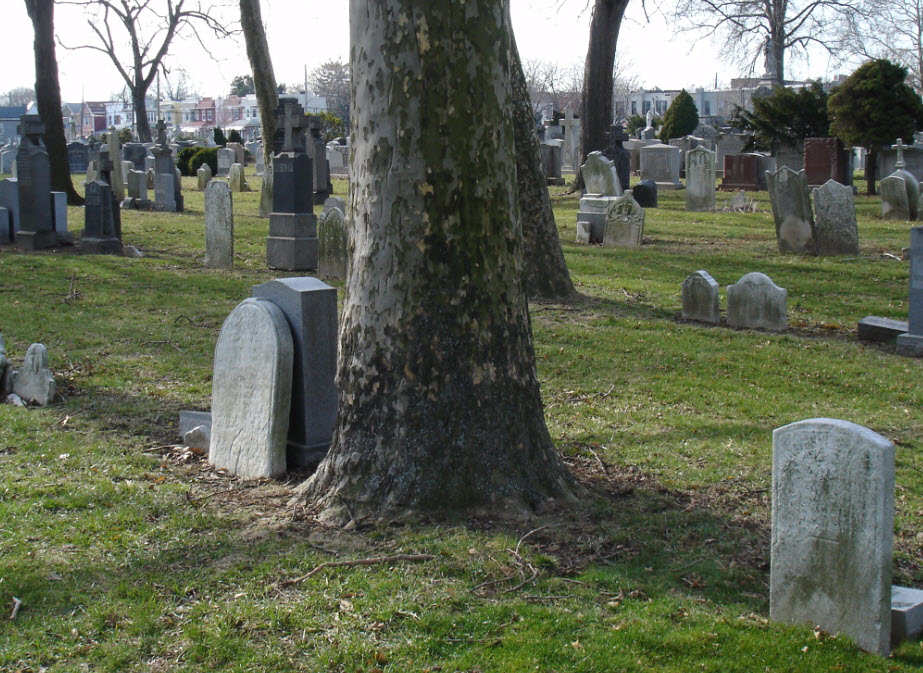 Thomas Joice's brother is buried roughly around the gap next to this tree.

So what about Thomas Joice's sons? Their descendants, especially any direct line male ones, would be ideal DNA testing candidates. Unfortunately, Thomas's colorful wife, Bridget, essentially rendered them invisible. After losing her husband of four and a half years, she developed a case of wanderlust, criss-crossing the Atlantic several times back when most considered it a once-in-a-lifetime endurance contest. During the course of these journeys, she bounced around the U.S., Ireland, and England, and at least temporarily, snagged another husband.

The confusion she left in her wake forced me to research several countries for multiple versions of each family member's name with the end result being plenty of candidates, but none that were a definite fit. Given her proclivity for both constant shuttling and fibbing, I'm not entirely convinced that she didn't leave her children with others as it would have been easier to pick up her trail if she had kept them by her side.

Sadly, Bridget took the sailor's family secrets with her to the last place I was able to spot her - a poor house back on American soil more than 40 years after Thomas's loss. But the Clifden, Ireland connection remains -- making County Galway home to another American hero. And lest some should think that Galway's ties to the U.S. are all martial in nature, I offer the exception of Katy Perry.

[Those especially interested in the USS Monitor or history mysteries in general may enjoy reading these previous articles about William Bryan and George Frederickson, who also served and died on the Monitor.]