While we're very much of the mindset that men and women certainly can do the same workouts, they don't necessarily always want to. For every trailblazing female pull-up champion, there are still handfuls of other ladies who won't leave their Lululemon comfort zones. And while more and more women are becoming less intimidated by weight lifting, we still see a heck of a lot more dudes flexing around the squat rack than claiming space in step aerobics class.

But those men might be missing out. As the saying goes, variety's the spice of life -- and so, too, in exercise. Not only will you grow bored of doing the same ol' thing every time you hit the gym, your body will likely stop showing you the results you desire.

So, dudes, mix things up -- big time -- by trying your hand (or foot, as it may be) at one of these workouts typically geared toward women. There are benefits for even the biggest bros. 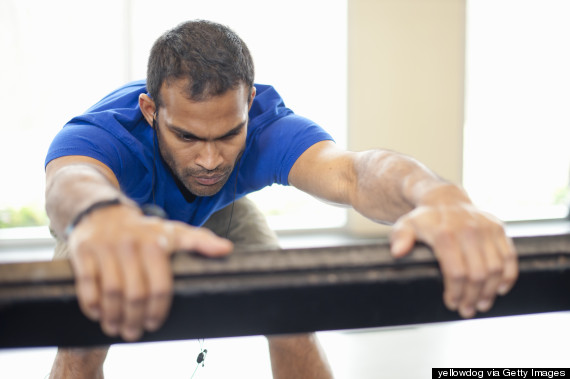 Why Men Should Try It: "Our cultural expectations of who dancers are" probably keep more than a few men away from the barre, says Ben Greenfield, CSCS, C-ISSN, of Ben Greenfield Fitness. But those small, pulsing movements may help guys build up a sort of resistance to "the burn" during other activities, he says. And the standing core work has more "athletic crossover" than traditional ab moves, like crunches, he says. 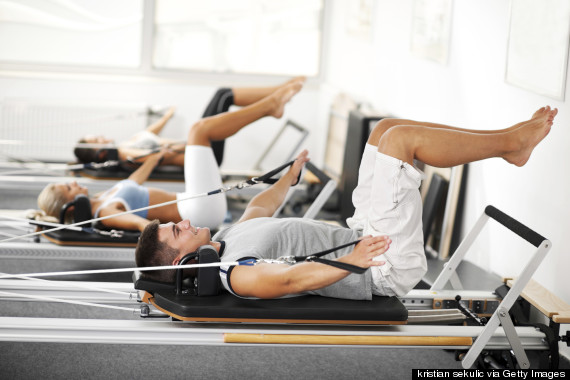 Why Men Should Try It: Its reputation as being a stretching-heavy class geared mainly toward dancers isn't necessarily true, says Jenn Seracuse, director of Pilates at Flex Studios in New York City. "[Founder] Joseph Pilates wasn't a dancer, and he was, in fact, a man!" she says. In fact, the practice has quite masculine origins: Pilates created his workout as a way to help wounded soldiers with limited mobility rehab from their hospital beds.

Seracuse's clients are mostly female, but guys are missing out, she says. Stereotypically male workout routines tend to make men tighter, and Pilates can increase their flexibility, which in turn can benefit everything from running form to golf swing, she says, not to mention within the gym.

"If [men] don't have a sufficient base of flexibility and stability, then squatting and lunging won't be possible," says Marc Perry, CSCS, CPT, founder and CEO of BuiltLean. Pilates may also help correct posture mistakes in men who are, say, hunched over a computer all day, he says.

Plus, they’ll be in good company: A number of professional (male) athletes have turned to Pilates recently, including LeBron James. 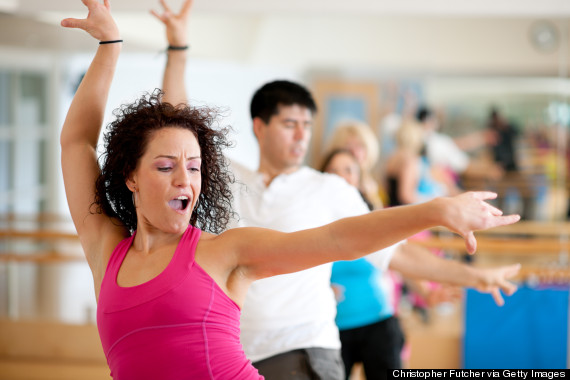 Why Women Love It: The tagline -- "Ditch the Workout, Join the Party" -- just about sums it up. The cardio class can burn almost 10 calories a minute, more than other popular group fitness classes, like step aerobics or hooping, according to ACE research. It may also help strengthen the core and improve flexibility, depending on the moves chosen by a particular instructor.

Why Men Should Try It: Guys who want to bulk up won't exactly find what they're looking for, but "if you're looking for a little extra cardio, I say go for it!" says Greenfield. "I think it's a nice way to spice up your routine, if you're confident and ready to have fun -- or a good dancer because you've honed your moves at the club!"

It could even help with mobility and coordination. But even if it's just a party, it's better than nothing. "At the end of the day, it gets people moving and active," says Perry. "It's a stepping stone to getting in better shape." 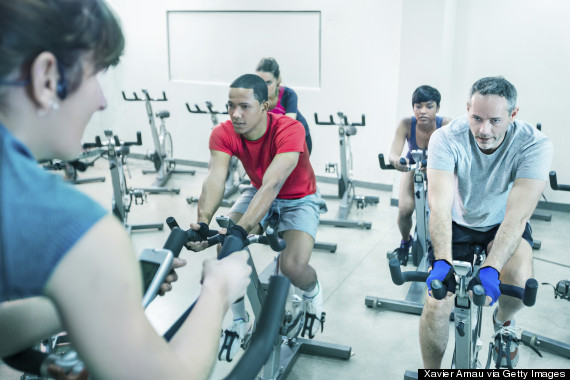 Why Women Love It: Spinning provides mega-calorie burn with some lower-body strengthening. Trimming the legs may be a goal for more women, while men tend to focus on building the upper body, says Greenfield.

Why Men Should Try It: "People of both genders are turned off by the perception that spending 45 minutes on a bike will be uncomfortable, especially for people unused to biking," says Dena Kranzberg, a nurse practitioner and certified Spinning instructor in New York City. "As with any workout, it takes practice, and practice will also make the seat more comfortable."

For guys looking to torch calories and strengthen quads, glutes and calves, Spinning provides an alternative to the "dreadmill". Plus, it's easy for beginners to hop on a bike and ease into a class, says Perry, and with the loud music and group atmosphere, he says, "people don't even think they're working out."

9 Types Of People You'll Meet At The Gym
More:
healthy livingspinningexercises-for-womenbarreFitness and Exercise
Newsletter Sign Up
An essential daily guide to achieving the good life
Subscribe to our lifestyle email.
Successfully Subscribed!
Realness delivered to your inbox