I recently stumbled upon the Canadian sitcom Men With Brooms, which aired last year on the CBC channel in Canada. Men With Brooms wasn't picked up for a second season, making the 12 episodes of the first season the entire run of the series. That's a real shame in my mind, because as the show progressed it began to really develop into something special.

Men With Brooms was a sweet little sitcom about a group of friends who hang out in a bar and form a curling team. You know curling, that sport we try to care about during the Winter Olympics but can't because it's too boring? The one on ice with the stones and the brooms? It's all the excitement of hockey only without the fights, at one millionth of the speed and with no actual excitement.

The show is based off the 2002 movie of the same name starring comedy legend Leslie Nielsen and Paul Gross, probably known best in America as Mountie Benton Fraser from Due South. I know him best, however, as the delightfully unstable Geoffrey Tennant from the wonderful Canadian dramedy Slings and Arrows about the torturous love that goes into running a theater program. I've watched Slings and Arrows so often that my DVDs look like they have barely survived a nuclear apocalypse. Needless to say, my affection for Paul Gross runs deep. So finding out that Gross was both the narrator and one of the creative forces behind Men With Brooms caused me to seek it out. 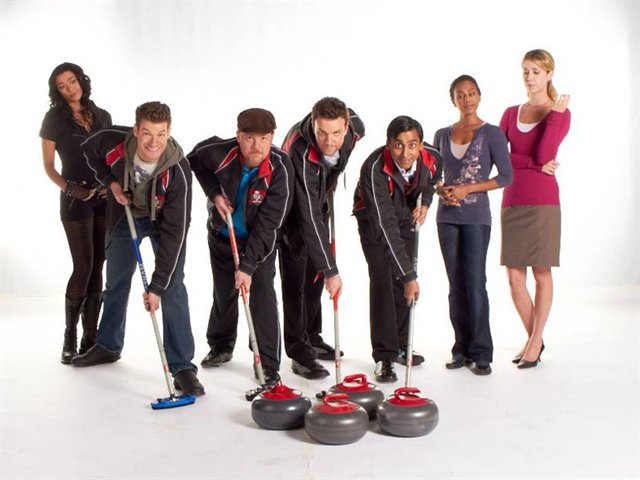 If you're worried about not being into curling, don't worry. The show is about curling like One Tree Hill is about basketball, which is to say it's really not. It's about the relationships between friends.

Over the course of the season, the cast really gels together in the way that all friend-based sitcoms should. They seem like a group of friends you'd want to hang out with and play elaborate board games with, like members of the group do in the show's second episode. Pramesh, who looks like an Indian Steve Carell, is truly a comedic scene stealer with his large doe eyes and unflinchingly cheerful demeanor. The show also has a fun workplace romance in the form of the attraction between April and Gary that has spark enough without bogging down the story with a drawn out will-they-won't-they.

The tragedy of the cancellation of Men With Brooms is really one of unfulfilled potential. By the end of the first (and only) season, the show was starting to find its voice. Like many sitcoms starting out, the first few episodes played it safe. In fact the pilot included some fairly cringe-worthy jokes about vegetarianism that would not push even the lightest envelope. By the end of the season, however, the show was allowing itself to get weirder and therefore much more interesting.

For instance, an episode with a subplot about Gary investigating Pramesh's hobby-jumping after he began to blow off curling practice got increasingly weirder. As the story progressed it became a mishmash of film noir, conspiracy movies and detective procedural. At one point a former volleyball team member of Pramesh's even remarks on the over-dramatics when Gary flips open a notepad to question her like every detective on Law and Order.

Throughout its first season run, Men With Brooms also toyed with other narrative devices. The season (and series) finale used a flash-back, multiple point-of-view structure that would be familiar to fans of British sitcom Coupling or CBS hit How I Met Your Mother. Another episode played with smash cuts like the whip-smart Tina Fey comedy 30 Rock.

One of my favorite story lines was a send-up of pacts people make to take better care of themselves. On the show Gary, Matt and April try to shake their addiction to soda (or pop) and end up caving. It's a favorite because I've tried to quit drinking soda several times cold turkey and I always turn into a caffeine and carbonation-starved lunatic several weeks in. It was like the show was speaking directly to me.

The show was beginning to play with its narrative story structure and have fun with sitcom conventions. I'm sad that we'll never know the comedy it could have grown into had it more time to develop its voice. As it is, it introduced some fun characters along the way. People who could be snobby about an open mic night at a donut shop while still supporting each other. The show's likable sweetness didn't detract from its humor, it just made you want to hang out and pretend to care about curling with its cast.

So if you're looking for a fun comedy straight from the great white north maybe give Men With Brooms a try, eh?

The first season of Men With Brooms is now available on DVD.

Kris Jenner Celebrates Mother’s Day With Family Throwbacks: 'I Thank God Every Day For Making Me Your Mom’