I am teaching my 16-year-old daughter how to drive. She'd prefer I don't speak of our experience with anyone she knows. You're not acquainted with my daughter, but if she happens to run into you (Don't worry -- I mean like on foot, let's say in a store or a restaurant!) please immediately state the following, "Hi! I don't know anything about any smashed-in parking attendant booth." Thank you in advance for salvaging her privacy.

First, lemme just say I would simply love to meet the lawmaker who decided that someone who still gets acne, oily hair, Drama Queen Awards, collects Hello Kitty stickers, will admit she used to be on "Team Edward" and is prone to fits of giggles when I try to show her the movie, "Terms of Endearments" is the correct age to plunk down in the driver's seat of my Toyota.

I was thinking of skipping the Driving-Right-of-Passage thing completely and just sending her to college in NYC, hoping she'd eventually get married and settle down blissfully on the subway system.

But somehow, she managed to pass the Online Driver's Education course with flying colors. Notice I didn't say with "driving" colors. Nevertheless, I took a deep breath and sent her on her first driving lesson with a paid professional last week. He returned in one hour sharp, asked for $300 dollars, two Tylenols and said he was going to have a root canal in a local bowling alley. Basically, he needed to do something less stressful than driving with my daughter down the quiet side streets of our neighborhood. And he has two steering wheels and passenger brakes in his car.

Before the next lesson, I decided to give her a few of my own tips. You know, those subtle nuances of driving that nobody else can teach you.

Driving Guidelines You Must Learn On Your Own

1. Drive defensively. Assume everyone is an idiot and doesn't know what they're doing. Everyone but me.

2. In a left hand-turn lane (without the green arrow to help you know when it's safe to turn) do not succumb to the pressure of the man behind you who incessantly honks and yells, "Will you go already, you stupid dame!" while checking which way the wind is blowing with his middle finger.

3. Leave one car length between you and the vehicle in front of you for every 10 miles-per-hour you're traveling. A good rule of thumb is if you can finish singing the chorus of, "It's All About the Bass" before you rear-end the car in front of you, you're fine.

4. When other drivers let you cut in front of them, be sure and give them "The Hand." You know, that little gesturing wave that says, "Thank you for not being a jerk like everyone else on the road and letting me in because you're obviously a mother yourself and can understand what it's like when you almost miss your exit and are late for your therapy session."

5. Don't toot your horn in rhythms that sound suspiciously like Donna Summer's "Bad Girls" or the beginning of Michael Jackson's "Beat It."

6. Don't memorize the eye chart at the DMV because you think you'll look old(er!) in glasses.

7. We don't call it "your blind Spot" anymore. But be careful of your "sight impaired spot," because you have several!

8. Whenever you have the inclination to make an illegal u-turn, it's a sign that you have lots of regrets in your life. So just make another appointment with that nice therapist.

9. Keep important documents like proof of insurance and registration in an envelope clearly marked, "These are not fast food coupons, notes for future blogs or super flattering selfies taken at stoplights that don't show your crow's feet."

10. Never answer your cell phone while driving unless you can tell by the angry, persistent ring that it's me calling you to pick up toilet paper and Ranch dressing.

11. Using certain interior features costs you more gasoline. No air-conditioning unless it's the Hot Flash from Hell. Don't put the heat on unless it's to blow-dry your hair or defrost the lamb chops you forgot you're making for dinner.

12. Don't call AAA auto club, crying about locking your keys in the car more than once a week. If you do, make up a new last name. We've already used up our quota for that particular issue thru the year 2022.

13. Don't trust the little dashboard gauge that says you can drive five more miles before running out of gas. I've called the Toyota dealer and made them admit a practical joker engineer designed that. Also ignore the funny-looking symbols that light up for no apparent reason at various mysterious times of driving. Those were programmed in by the author of the car manufacturer's manual in the hopes his "book" would become a best-seller. 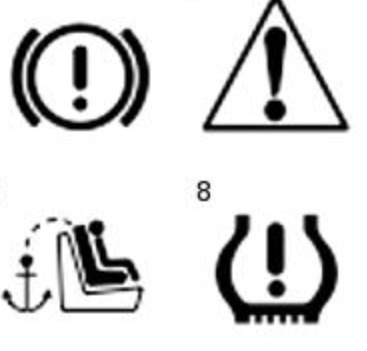 14. Remember the acronym "A COMB AND BRUSH" which stands for, "Always Call On Mom Before Arriving Near Dangerous Boys Rarely Using Safety Harnesses." If it's too late for that and you've already hit the handsome parking lot attendant, simply remember what McDonalds claims to use in their Fillet-O-Fish. COD. (Call On Dad!)

Daughter: Don't worry, Mom. When we're done with me, I can save my allowance and we'll get you some driving lessons too.

You might be asking why I'm rushing this process. After all, many kids don't get their license until they're closer to 17 or 18. It's because teaching her to drive has aged me far more than any menopausal symptom ever has, and I'll be needing someone to drop me off at the Senior Citizen Home next week.

Originally posted on Author's Humor Blog "Once Upon Your Prime!"