"Am I pregnant?" I've been answering this question for years. (If you must know, for many years.) Earlier this year, though, something unusual happened, and I got an answer for which I was unprepared.

Last February I travelled with the extended family, but without my husband, to Key West for spring break, where I had my period. When I came back, I had sex with my husband, Jim. In March: no period.

Hmm. Was I pregnant? Was it possible? Technically, all the pieces are in place: I am a woman with one child, I get my period every month, I had sex with my husband.

I was in denial for weeks. Four weeks exactly. Then in the parking lot of the grocery store, I resolved to do something. I opened my well-organized Coach bag and pulled out my list: tomatoes, strawberries, bananas, turkey, shampoo.

I clicked the cap of my Pilot G-2.07 and wrote: PREGNANCY TEST, all caps, at the bottom.

Underneath that I wrote: beer.

I blame the whole fiasco on my new ob/gyn, a graduate of Harvard Medical School, whom I thought was the very best. I'd avoided a visit with an ob/gyn for several years after I'd had a major health issue that required two surgeries. During those years of doctor avoidance, I figured I could dispense with the relatively minor ministrations of an ob/gyn, right?

Wrong. Dumb thinking because when I asked this new ob/gyn if I still needed to use birth control, she said, "It's highly unlikely that you'd get pregnant at your age. Go ahead and enjoy." Gee, thanks. So I'd marked birth control off my to-do list. And now, upon the advice of this Harvard-trained doctor, I'd just missed my period for the first time in many moons -- since my daughter was born when I was 29.

I slammed my car door, tucked the list back in my bag, and navigated my cart like a boss to the produce section, where I selected the very best box of organic strawberries, the very best bunch of organic bananas. I rolled around to the deli counter to order my favorite turkey. Onward, I proceeded to health and beauty, where I splurged on a fifteen-dollar bottle of shampoo.

Then I looked up at the signage. Where were the damn pregnancy tests? I'd missed out on this common rite of womanhood: I've never purchased one because the DIY version didn't exist last time I needed to check. Back then you had to go to a doctor's office to get a pregnancy test, then a nurse called you on the phone with the results.

At the end of the aisle, I peeked around the corner. A bearded dude in an "Ithaca is Gorges" tee shirt had parked his cart in front of the birth control. Crap. I looked down at my list and checked off all the items I'd already picked up. When he sidled off, I headed into the empty aisle. I scanned the shelves. Where were they? Oh. My item lurked down there, on the bottom shelf. I looked around to make sure I was alone, then grabbed the generic brand -- its bold, black, 72-point type declaring it to be a PREGNANCY TEST -- and hid it underneath my bread and strawberries.

I heard a roar. I am woman.

One final item: beer. Possibly the most important item on the list.

I checked out and drove home to do the deed. I stashed the beer in the fridge, put everything else away, then took the test to my bathroom, where I carefully read the instructions. Pee on the end of the stick. In two minutes the indicator would display a plus sign for "pregnant" or a minus sign for "not pregnant." Well, okay. In case I screwed up the procedure, or got an undesired answer, there were two tests. I did my part, then waited, staring at the display window like it was a Magic 8 Ball. My fortune? A minus sign. Not pregnant. "Well, universe," I asked, "why have I not gotten my period in a month?" 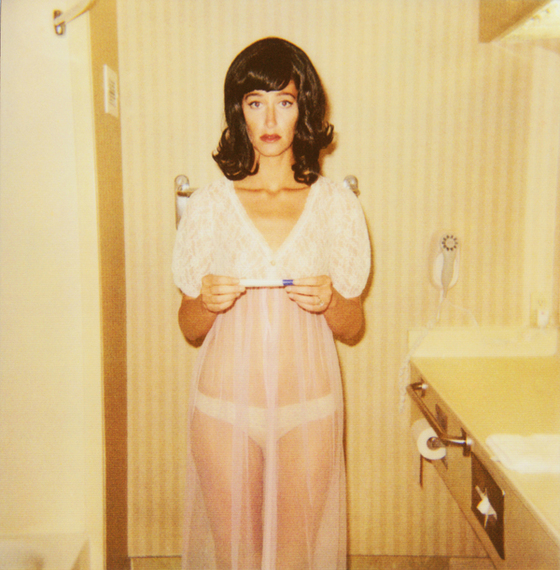 When Jim arrived, I pounced.

"I took a pregnancy test."

I had his full attention. "How come?"

"Because I haven't had my period in a month!"

I paused for dramatic effect. "Not pregnant."

He laughed. "Well, have you ever seen a 54-year-old pregnant woman?"

Huh? I thought about it. "No, but Halle Berry got pregnant at 45, so who knows?"

Jim, a professor, looked up the statistics. "Doesn't look good for getting pregnant at 54, hun. Way less than one percent."

I waited another month, taking no action, which was smart on my part because at the end of April my period resumed, regular as ever.

I still haven't solved the case of the missing period. I guess I'm not accepting that menopause is attacking me, so I took a peek at Wikipedia. It said to use birth control until one year after your last period. Whoa. Wikipedia knew more than my Harvard-trained ob/gyn.

That little piece of knowledge has changed my worldview. I can worry about menopause another day. Plus, I already have an extra pregnancy test in tow just in case.

(This essay originally appeared on Medium.)

Learn more about Lisa at http://lisashanahanbooks.com