French writer and poet Antoine de Saint-Exupéry once famously said, "Even our misfortunes are a part of our belongings." This sentiment seems especially fitting as we enter the fourth night of Hanukkah, the holiday that celebrates the Maccabees' victory over the Greeks.

With a turbulent history ourselves, the Jewish people are able to identify with a present that is molded by past struggles and misfortunes. In commemoration of that victory, Jewish law indicates that a menorah, also known as a Chanukiyah, is lit to remember the miracle of Hanukkah. In its most basic form, a menorah must have eight oil or candleholders neatly lined up in a row on equal height. However, menorahs can be as simple as eight shot glasses or extremely opulent and elaborate.

As the owner of the only auction house in the United States that is dedicated solely to the sale of antique Jewish ritual art, I have had thousands of menorahs pass through my hands over the span of my 30-year career. These functional art pieces not only show the commitment of a people to their religion over the centuries, but also a diversity of style and form that indicates on how long ago and where they were made.

The Jews first immigrated to Poland in 1335 when the ruler, Casimir the Great, established the town of Kazimierz for the Jews, which later became part of Krakow. The Jews there lived in relative peace with their Christian neighbors until World War Two, when the population dropped from 60,000 to about 6,000. The menorah below was created in Krakow in 1851 by artist W. Knaru during a time of relative prosperity for the Jewish community in the area. It is therefore fitting that the piece is pure silver and features a back plate decorated with a stylized harp and floral vignettes. Having survived World War II, the Menorah symbolizes the Jewish peoples' resilience and perseverance to survive. 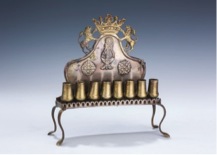 The Jews of Ukraine share a similar history to those of their Polish counterparts. Arriving to the Ukraine in the early 11th century, a large population of Jews lived there until World War II, when 1 million people were killed during the Holocaust. The Holocaust was not, however, the first anti-Semitic event in this region. In 1821, after the death of a Greek Orthodox patriarch, anti-Jewish riots began and ended in what is arguably the first recorded pogrom. Throughout their stay in the Ukraine, Jews constantly faced violence and anti-Semitism. The menorah below was forged in the early 19 century in Ukraine (around 1820), and is arguably indicative of a Jewish culture and community used to strife and violence, particularly noted in the crossed swords and bird finial. 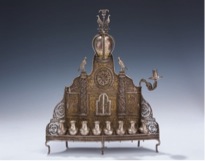 Wurzburg again shares a similar Jewish history to Poland and the Ukraine. The Jews arrived in Wurzburg in the 11th century and dealt with constant violence and hatred. They were persecuted during the Crusades in 1119, 1298, and 1349, and were eventually banished completely. They were later allowed to return, and flourished until World War II. Unlike most other European Jewish communities that were devastated during the war, the Jews of Wurzburg have made a comeback, and today, there are many Jewish societies in Wurzburg, including four institutions for Torah study.

This fourth Menorah originates from Wurzburg, Germany and dates back to 1800. It is a Neo-classical design, is hand chased, and in exceptionally fine condition. This piece is especially remarkable because Judaica from Wurzburg is almost unheard of. Lastly, it still contains its original servant lamp. 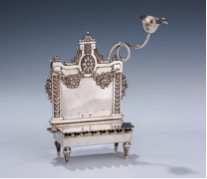 The menorah below demonstrates a Jewish culture that is fairly unusual. Made in 20 century India, the menorah is decorated in brass in the art nouveau form. Additionally, each of the oil holders are in the shape of a swan. 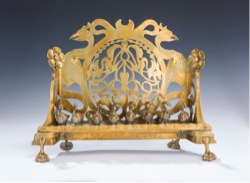 The Jews' history in India is much happier and peaceful than the others. The Jews there lived without any anti-Semitism and enjoyed high positions under princes as well as in the government, in the military, and in industry. After the State of Israel was established, most Jews in India immigrated to Israel.

Finally, this Trench Art Menorah was made in Israel in 1966. It is made out of a rifle handle and contains an engraved plaque with dedication from then General Yitzchak Rabin. 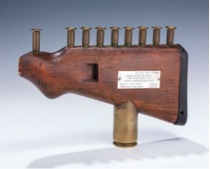 Yitzhak Rabin's military career was nothing short of extraordinary. He served for 28 years, ending his career as the chief of staff (1964-1968), and commanding the IDF during the Six-Day War, a victory that to this day is shocking and unexplainable. Most notably, Yitzhak Rabin became the Prime Minister in 1974. The Menorah represents the balance between the secular and spiritual that exists in the Jewish state and demonstrates Jews willingness to fight back both through the military and by holding onto our traditions.

This Hanukkah, when Jews light their menorahs, we should remember that the item we are lighting holds a large cultural and historical significance. It symbolizes not only the original victory in Greece and the miracle of the lasting oil, but also the miracle of the surviving Jewish people.