Members of the county Los Angeles County Board of Supervisors reluctantly conceded Tuesday that the dilapidated Men's Central Jail would have to be demolished, but they postponed voting on a replacement facility until a consultant analyzes its cost and whether the inmate population can be reduced through "alternatives to incarceration."

"That is a huge number," Supervisor Zev Yaroslavsky said. "We have to test the assumptions about how big of a facility we really need."

"We do have to replace Men's Central Jail," Supervisor Michael Antonovich said. "The next steps are (figuring out) the facts and figures, staffing, cost of operation."

Hundreds of protesters with "No more jails!" printed on their orange shirts urged the supervisors to spend the money on education, job creation and other programs that can prevent people from turning to a life of crime in the first place.

"We are here to say 'no' to a $1.4 billion construction project and 'yes' to community services in our community," said Diana Zuniga of Californians United for a Responsible Budget.

After analyzing Sheriff Lee Baca's jail plan, Vanir recommended demolishing the half-century-old Men's Central Jail, where electrical and plumbing systems are breaking down and deputies don't have a direct line of sight into all the cells they're supposed to supervise. It also called for building a minimum security facility called Women's Village at the Pitchess Detention Center in Castaic and, in downtown Los Angeles, the Consolidated Correctional Treatment Facility for the growing population of mentally ill inmates.

The least expensive option is to build the treatment facility and renovate the existing Mira Loma county jail to house female inmates.

The most expensive option is to build the treatment facility and Women's Village, and modernize Mira Loma.

"It's not surprising that a construction company in its report proposed several options, all involving construction costing billions," she told the board. "Vanir is not an authority on looking at alternatives to incarceration, but an authority in designing correctional facilities."

Lim instead sided with prison expert James Austin, who believes the inmate population can be reduced by about 3,000 over the next two years through split sentencing -- having inmates serve a portion of their sentence in jail and then be placed on probation -- as well as pretrial home detention with electronic monitoring, treatment for nonviolent mentally ill inmates, and fire camps for those inmates capable of assisting the Fire Department.

Austin agreed with Vanir about the closure of Men's Central Jail, and construction of separate facilities for women and the mentally ill -- though on a smaller scale costing only about $500,000.

Assistant Sheriff for Custody Terri McDonald said the Sheriff's Department is already looking at alternatives to incarceration, but she doubts whether it would make a significant dent in the inmate population.

"I just can't look you in the eye and say we can get there," she said.

Authorities Agree Men's Central Jail Should Be Demolished, But Replacing It Is A Different Story
Jails Transformed Into Hotels 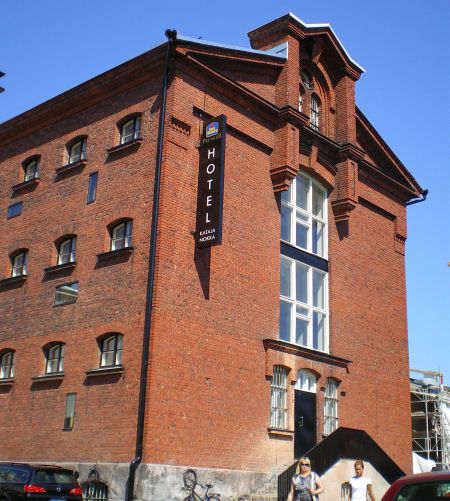 1 / 6
Hotel Katajanokka, Helsinki, Finland
The <a href="http://www.gogobot.com/best-western-premier-hotel-kat-helsinki-hotel">Hotel Katajanokka</a> opened as a Best Western in 2007, but the outer red brick walls and central hallway of the former Helsinki County Jail remain. Each of the 106 rooms was created from two or three prison cells.
Gogobot