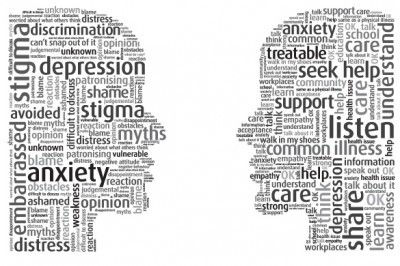 Mental health is something that is widely disregarded amongst the black community. If someone of color is facing mental uncertainties, we only seem to label them as the "crazy" family member or friend, gossip about their "craziness," and ask everybody in the church to pray for them. We as people are applauded when we bring home good grades or accolades, routinely apply for jobs, keep the house clean, represent the family name well, etc. However, when we attempt to open up to our parents or peers of color about our mental instabilities, their immediate response is "there ain't nothing wrong with you." In result, we attempt to combat our feelings and emotions, by ourselves, in our head, which isn't healthy.

African Americans are 20% more likely to report having serious psychological
distress than Non-Hispanic Whites, according to the U.S. Department of Health and Human Services. However, young black adults, especially those with higher levels of education are significantly less likely to seek mental health services than their white counterparts, according to the American Psychological Association. A qualitative study discovered that among Blacks who were already mental health consumers, over a third felt that mild depression or anxiety would be considered "crazy" in their social circles; furthermore talking about problems with an outsider (i.e., therapist) may be viewed as airing ones "dirty laundry."

We need to eliminate this stigma.

Around 48% of blacks, including myself, were raised on a Baptist foundation, accompanied by "that ain't nothing but the devil," parents. Through personal experience, I can validate that some church folk can be so bible-minded that it leaves them blinded from reality. The old fashioned logic seems to be on the lines of "if we can't see it, it must not be there." However, mental illness is a real thing. Personally, I have watched some family and friends mental health deteriorate helplessly, because onlookers were too busy in prayer than to help them receive proper treatment.

Faith without works is dead.

I posted a poll on social media to see how millennial's felt about this topic. In result, over 50 voters participated. The majority ruled that they don't feel mental health in the black community is taken as seriously as it should be. 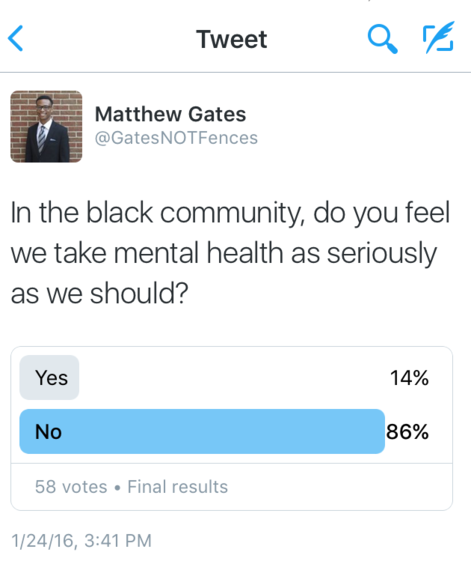 If a family member or a good friend expresses to you that they may be facing a mental illness, believe them. Furthermore, help them seek treatment.

If you feel you may be facing a mental illness, mild or severe, it is ok to ask for help.