May is Mental Health Awareness Month and one of the important things to remember is that mental health is a family affair for many reasons. First, it is crucial that people understand that many mental illnesses are genetic disorders and knowing the brain health history through the generations in a family can be very helpful for prevention and treatment.

Another reason mental health is a family affair is because holistic health in a family is a major factor in contributing to the care of a person living with these types of health challenges. Being open and supportive within a family creates a foundation for health that can have a positive impact. The question of "nature vs. nurture" can be a debate, but we know that it is both genetics and environment that deserve equal attention in helping someone manage their mental health. 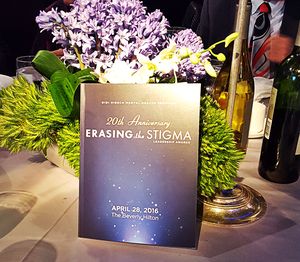 We were so pleased that the focus of the recent Didi Hirsch "Erasing the Stigma" event was on mental health in families. This is a topic that is usually on the top of family "secrets" list which made it all the more powerful to hear inspiring stories from celebrities and families who had benefitted from treatment at Didi Hirsch. Among the celebrities were Melissa Rivers and Ronda Rousey, who both shared what it was like to lose a father to suicide.

The night started off with emcee Eva LaRue sharing a touching story about growing up with a mother with mental illness. It's an experience that many people can relate to all too well. A young Eva played around her home, while her mother ran around with her, exuding verve stronger than Eva's. As a child, her mother's extreme energy bursts were fun, but the older she got the more Eva realized it was like "having another child running around the house." Her mother was later diagnosed with severe Attention Deficit Hyperactivity Disorder (ADHD). Everything made sense, and Eva described the news as a relief and commended her mother for her courage. 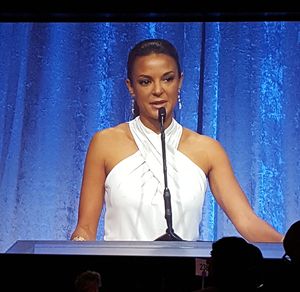 Eva's story was the catalyst for the stream of inspiration and authenticity that continued throughout the night. Stories from those like AnnMaria De Mars, mother of Ronda Rousey (UFC Women's Bantamweight Champion) who spoke about her daughter's struggle with a speech disorder as a child, as well as her father's suicide, and bulimia. Ronda channeled her experiences to help others and focuses her activism on "Don't Throw Up, Throw Down" fundraising events for mental health. 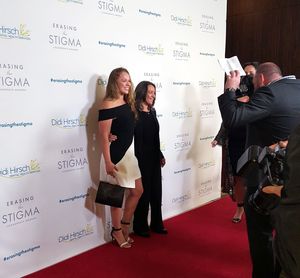 The strength and resilience of the people who spoke was admirable, and the stories were reminders of the mothers, fathers, sons, daughters, cousins, aunts, uncles, who all live with mental illness and those caregivers who are closest to them and are often affected as well.

Director, writer, and producer Maya Forbes talked about her turbulent childhood and the challenges she had dealing with her late father, who had bipolar disorder. She learned to accept her father's illness and used her first hand knowledge to create the film "Infinitely Polar Bear," portraying an entire family's experience. Her father's openness about his illness made it easier for Maya to understand and work through it as a family and she described her father's encouragement as "like throwing a door open and saying come on in". When she asked him what the worst part of his illness was, he said "loneliness."

Loneliness and isolation with these issues is common and very toxic. This is where the importance of conversation and awareness intersect. One of the many quotes that encompassed the night was from Dr. Kita Curry reciting John Donne: "When we work together we are so much healthier than when we try to do everything alone." Creating a safe and comfortable space to talk about mental health is the first step to acceptance and getting treatment. Every time someone shares a new story, a plank is added, widening the platform for discussion that is healing and in some cases life-saving. Cheers to the team at Didi Hirsch for paving the way for so many families to heal, feel included and #flawless!