Depression came crashing into my life like a wrecking ball at the tender age of 14. It brought some ugly sidekicks: eating disorders, body dysmorphia, anxiety, issues with alcohol. Loneliness, worthlessness, despair. All were my miserable companions for more than a decade. 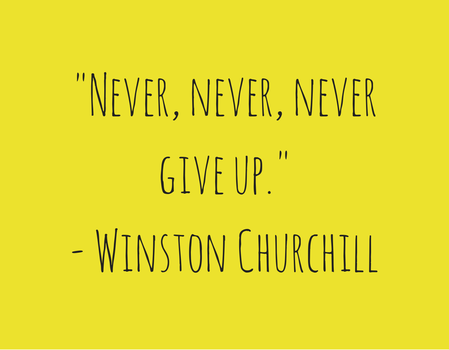 The good news is, I didn't give up. I wanted to. Lots of times. But I didn't. And these days, life is brighter than ever.

In the wake of the tragic news about Robin Williams, it's crucial for those who struggle with depression to cling to hope and life and the knowledge that things will get better. By sharing our journeys, we can shine on a light on an affliction that affects so many of our fellow humans.

So, here are 16 things I learned in 16 years with the dreaded "D" word (note: this list is not exhaustive):

16. There's always hope.
If you'd suggested this to me in my darkest, all-I-want-to-do-is-die moments, you could have just as easily told me that Inception is a true story or pigs are taking pilot exams. Hopelessness is a major symptom of depression, which makes it kinda tough to see the light at the end of the proverbial tunnel. But the light is always there.

15. I can't expect to feel good all the time.
Once I found good feelings again after such a long battle with depression, it felt like failure to fall back into any unhappiness or "meh" moments. But being human comes with a thrilling (and vomit-inducing) roller coaster of emotions. Even the happiest people have bad days.

14. Alcohol was not my friend.
The mind-numbing effects of six PBRs and a baby Guinness sure felt like the ultimate antidepressant... for a very short, very embarrassing and very forgettable window of time. But the next morning always rolled around sooner than expected and that whole alcohol-is-a-depressant thing became painfully obvious. How I managed so many years of temporary highs followed by desperately low lows is a miracle. I don't miss drinking.

13. People who haven't suffered from depression have a tough time understanding it.
This isn't a criticism or a failing on their part, and it doesn't mean they don't love you. It's just difficult to understand something you haven't been through. I've had plenty of loved ones try very hard to get it -- and they deserve serious props for making the effort. But I couldn't rightfully expect that they'd know how I felt -- just like I can't expect to know exactly how a cancer patient feels, or how someone who lost their child feels. All I can offer is empathy and compassion, and that's all I can ever expect from anyone else.

12. Self-compassion is key.
I was my own worst enemy, always attacking myself for perceived flaws or failings or (God forbid) imperfections. I could offer compassion to other people and animals and even the earth -- but to myself? Never! At least, not until I actively worked to cultivate a sense of self-compassion.

11. Lots of other people are fighting similar battles.
When I opened up to people about my struggles, I was constantly amazed at how many shared them -- particularly people who seemed elusively happy and well-adjusted. Robin Williams (and many others who are sharing their stories in the wake of his death) is a prime example. In a society where image is everything, people are experts at putting on a happy face, but there's lots of pain simmering beneath the surface for plenty of folks. I've never regretted opening up to others, and in several notable cases, it earned me some of the best friends I've ever had.

10. There's a reason meditation has been around for thousands of years.
It works. My brain was such a chatterbox. I used to shut it up via booze or food or other temporary and thoroughly ineffective attempts at self-medication. But meditation has helped me learn to calm (or at least dull the roar of) my unquiet mind. Guided meditations come in many guises, and doing them on a daily basis has brought a whole new level of peace into my life.

9. Social media can exacerbate a sense of alienation.
When I was feeling bereft of all hope and human connection, looking at pictures of other people partying and having fun and beaming wildly was maybe not the best idea. If you have low self-esteem (as almost anyone with depression does), seeing other people's expertly crafted and deliriously happy-looking online personas tend to perpetuate these feelings. This isn't just my anecdotal perspective -- they've done lots of research that demonstrates Facebook makes us unhappy. It stunts our real-life social interaction, it makes us envious of others (instead of grateful for what we've got), and so on.

8. Spending too much time alone is a bad idea.
Depression made me feel like the Phantom of the Opera -- but without the creepy stalker behavior and awesome musical score. I desperately wanted to remove myself from civilized society and frequently did. Of course, hibernating alienated me from exactly what I needed most -- the company and support of friends and loved ones.

7. There is no final destination.
Even though I talk about my depression like a dreaded ex, I'm not speaking from some unattainable pedestal of perfection. There's no such Shangri-La. Life is a journey, and happiness stems from the journey itself. It's about finding joy in the here and now -- in this very instant. I'll have low moments again, undoubtedly, but there's happiness to be found even in the darkest hours, and that's something I never came to grips with before.

6. Exercise is an amazing antidepressant.
It's the ultimate in irony that one of the most effective treatments for depression requires motivation -- and depression, by its very nature, saps all motivation. When I was at my lowest, the absolute last thing on earth I wanted to do was get up and move. But regular exercise has worked wonders on my mood. Harvard Health Publications has reported that exercise can be as effective as taking antidepressants -- and the effects can potentially last even longer.

5. There's no quick fix.
Antidepressants can help you feel better almost immediately, sure, and that can be a hugely helpful option if you're in the depths of despair. But long term healing takes work. Consistent work. What that work entails depends on the person, but no matter what's involved, it's worth the time investment.

4. I should always ask for help when I need it.
I saw many therapists, psychiatrists, general practitioners -- tried acupuncture, meds, experimental therapies. And lots of other stuff. Some worked better than others, but I kept at it and learned invaluable lessons along the way, including that there always were myriad options -- and someone(s) willing to lend a helping hand.

3. My brain can change.
Our brains are designed to be habitual, so neural pathways form from our negative thought patterns, and this, in turn, can have seriously deleterious effects on us (hence the negative effects of stress on our bodies). Creating new pathways is challenging and time consuming, but doable. For me, it's been about forming positive new habits and breaking the old, bad ones. Learning to correct my distorted thinking patterns and positively rewire my mind (so to speak) has been a key element in my long-term healing.

2. Everyone's journey is different.
I can't stress this enough. This list is 16 things Hannah learned -- it doesn't mean anyone else who's suffered from depression will share the same conclusions, and that's totally okay. There are seven-plus billion perspectives in this world, and each is equally valid. For some people, medication is crucial. For others, long term psychotherapy might be the answer. Whatever works. I'm not suggesting that my path is best for anyone but me. But I am suggesting that everyone has a path to healing -- and the most important thing is to keep after it. Don't give up.

1. I can make it out.
While the support, assistance and tear-soaked shoulders of those I loved were hugely beneficial, no one could walk the path to recovery for me. Other people (doctors, therapists, family members, friends) could lend a hand, sure, but that first step (and second and third, et al) had to be my own. Self-empowerment leads to lasting change. And lasting change is possible.