Written in collaboration with Deepa Kannappan

Although an estimated 44 million adults and 13.7 million children in America have a diagnosable mental disorder each year, the issue of mental health remains surrounded by stigma and misunderstanding. This May marks the 63rd anniversary of Mental Health Month, but the problem of mental illness requires greater attention as a major 21st-century public health challenge. Among the millions of affected Americans, fewer than half get help, even though 80 to 90 percent of mental disorders are treatable using medication and other therapies. These disorders take an enormous toll on individuals and families, as well as society as a whole. In addition to the significant human impact, mental illness has enormous economic costs. Treatment for depression alone is estimated to cost $83 billion yearly, while lost productivity among those affected by mental disorders impacts the well-being of businesses, individuals and their families.

Despite the prevalence of mental illness, the stigma is so profound that many consider mental health problems to be the result of personal character flaws rather than real illnesses, like heart disease or diabetes. Addressing mental illness as a serious 21st-century public health challenge means:

Mental disorders include anxiety disorders (e.g., post-traumatic stress and obsessive-compulsive disorders), mood disorders (i.e., depression and bipolar disorder), eating disorders including anorexia and bulimia, addictive disorders (such as alcoholism), and personality disorders. However, not all demographic groups are affected equally by various categories of mental disorders. In an NIH survey of American adults conducted in 2008, age, sex and race variables were analyzed among those who had serious mental illness. Females were more affected than males, younger Americans more than older Americans, with varying results across ethnicity. Understanding the impact of gender, age and ethnic/racial differences is important in designing programs to reduce the prevalence of mental illnesses and in targeting effective interventions. 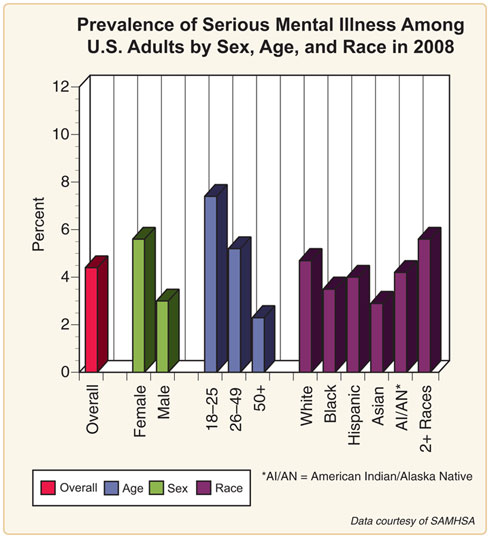 Sex differences in mental illness take several forms, including in the prevalence of the types of disorders that impact men and women. For instance, depression and PTSD are more common in women while other disorders, like alcoholism and antisocial personality disorder, are more common in men. The causes for these gender differences are in part linked to biological factors, such as the impact of hormones. There are also other risk factors for mental disorders that disproportionately affect women, including violence, low socioeconomic status, income inequality, subordinate status within society and the stress of multiple roles including work and child care responsibilities. Given these circumstances, women are more likely to suffer from specific mental illnesses, such as depression and anxiety, and are also 50 percent less likely to use mental health services than men.

Children and young adults are also at high risk for developing mental disorders, with 13 percent of youth in the United States under the age of 18 meeting the criteria for one of the six most prevalent mental illnesses: generalized anxiety disorder, panic disorder, eating disorders, depression, attention deficit hyperactivity disorder and behavioral disorders. Although there is some controversy about whether disorders like ADHD and bipolar disorder are over-diagnosed in American children, youth are at a very real risk for mental health problems that can be exacerbated by environmental factors, such as abuse and neglect, a stressful learning environment and media influences that propagate ideal body types.

Understanding the factors that contribute to mental illness is the first step; the second is to shatter the stigma that surrounds seeking help for mental illness, a stigma that is very pervasive in most cultures. The result is low rates of detection and treatment. Only 2 in every 5 people experiencing a mood, anxiety or substance abuse disorder seek assistance in the year of the onset of the illness.

A strategy to decrease this stigma is to educate the public that mental disorders have a biological and neurological basis, and are not a character flaw or personal weakness. Another strategy is increased outreach to affected individuals and their families. Public health education campaigns should encourage people to recognize signs of mental illness in their loved ones and urge them to seek help. Campaigns that engage celebrities, athletes and community members who have been affected by a mental illness to come forward as role models for those who are silently struggling can be very helpful.

Low rates of diagnosis are confounded by the fact that doctors may fail to detect mental illness even when patients seek help. Primary care physicians are not trained to be mental health providers, and few mental health providers work in the primary care setting. Thus, less than half of those who meet diagnostic criteria for mental disorders are identified by their physicians. A recent study found that primary care providers fail to recognize almost two-thirds of their patients who have a mental disorder. Doctors are often unable to identify the diagnostic criteria for a majority of the most prevalent mental illnesses. Primary care physicians and nurses must be better educated in the early detection of mental illness and be able to refer patients to qualified mental health professionals. Mental illnesses often complicate treatment of other illnesses like cancer or chronic diabetes, in part because the patient has lost emotional resilience. By detecting mental illness early, primary care professionals have the potential to dramatically change the quality of life of the patient and decrease the effects of co-morbidity with other illnesses.

Treatment for mental disorders can include a combination of psychotherapy, medications, social support and lifestyle changes. Support from family, friends and the community is vital. Additionally, behavioral interventions, including exercise, improved nutrition, sleep and stress reduction, can contribute to overall health and enable individuals to better manage their emotional problems.

Rear Admiral Susan Blumenthal, M.D., M.P.A. (ret.) is the Public Health Editor of the Huffington Post. She is also the Director of the Health and Medicine Program at the Center for the Study of the Presidency and Congress in Washington, D.C., a Clinical Professor at Georgetown and Tufts University Schools of Medicine, and Chair of the Global Health Program at the Meridian International Center.

Dr. Blumenthal served for more than 20 years in senior health leadership positions in the Federal government in the Administrations of four U.S. Presidents, including as Assistant Surgeon General of the United States, the first Deputy Assistant Secretary of Women's Health, as a White House Advisor on Health, as Chief of the Behavioral Medicine and Basic Prevention Research Branch and as Chair of the Health and Behavior Coordinating Committee at the National Institutes of Health. Admiral Blumenthal has received numerous awards including honorary doctorates and has been decorated with the highest medals of the US Public Health Service for her pioneering leadership and significant contributions to advancing health in the United States and worldwide. Named by the New York Times, the National Library of Medicine and the Medical Herald as one of the most influential women in medicine, Dr. Blumenthal is the recipient of the 2009 Health Leader of the Year Award from the Commissioned Officers Association and was named a Rock Star of Science by the Geoffrey Beene Foundation. To learn more about Susan Blumenthal, M.D., visit 4globalhealth.org

Deepa Kannappan, an undergraduate at Stanford University, serves as a Health Policy Intern at the Center for the Study of the Presidency and Congress in Washington, D.C.