You voted, and this December, we are talking nerdy about the science of mental health. In last week's video introduction, I stated that "we now know that the mind does not exist somewhere outside of the brain. Consciousness is a function of neurobiology, and mental illness cannot be separated from biochemistry." This appears to be a point of contention for many readers. For example, commenter pittelli writes that: 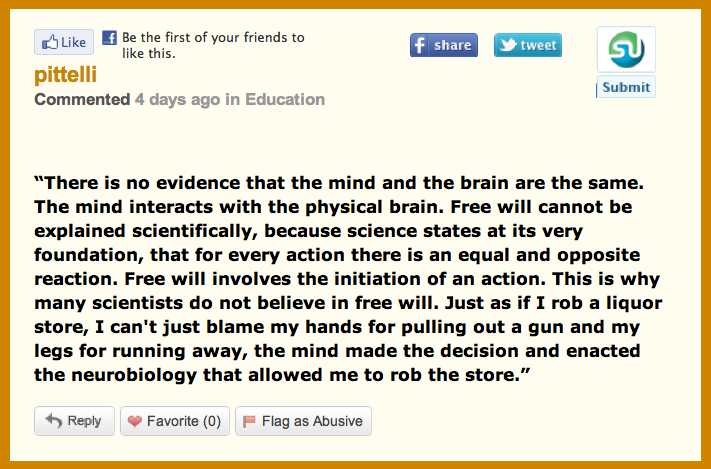 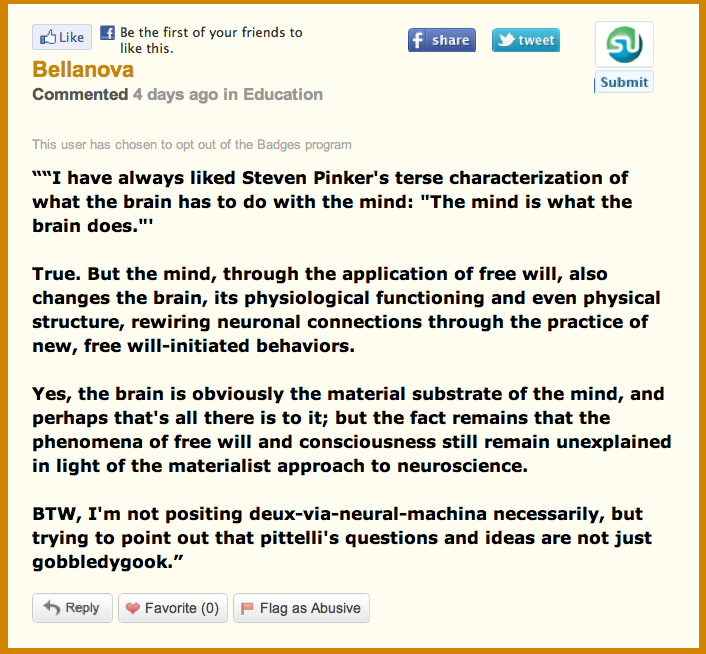 Before we can engage in a meaningful conversation about the science of mental health, we must ensure that we're operating with similar definitions of its associated terms.

The Mind-Brain Problem
When it comes to conversations about the human mind, arguments like the one between pittelli and Bellanova are neither new nor unexpected. Indeed, they are manifestations of a debate between dualists and monists, which dates back to the 17th century.

Dualism is a view that was popularized by the philosopher Renee Descartes. He claimed that the mind (soul or spirit) and the brain (or the body) are two separate entities, and although they may interact, they exist independently. This view further posits that the brain is a material entity, and because of this, it warrants scientific investigation. The mind, however, is an immaterial entity. In this view, since science is the study of the natural world, and the mind is a supernatural entity, it exists outside of the purview of scientific inquiry.

Monism, on the other hand, is the view held by most modern scientists. It posits that the mind and brain cannot be separated from one another; they are different descriptions, measurements, and interpretations of the same thing. To separate the mind from the brain is to separate heads from tails. They are two sides of the same coin.

Because every day, research is produced showing correlations between mental states and brain activity. As Bellanova pointed out, Steven Pinker famously said that "the mind is what the brain does." Scientists no longer doubt that consciousness, or our own subjective awareness of self, is inextricably linked to brain activity. There is absolutely no evidence that the self persists once the brain has perished. In fact, even a living brain that has been ravaged by disease can offer clues as to how the mind originates from brain. Those of us who have seen the effects of dementia, severe brain injury, or debilitating memory impairment, such as that seen in Korsakoff's patients, can attest to the fact that when the brain deteriorates, the mind follows.

Perhaps one of the most telling examples comes from the account of Phineas Gage. In 1848, he suffered an unfortunate accident that caused a large iron railroad tool to impale his head. The path of the tool has been digitally rendered:

Incredibly, Gage survived the injury. Firsthand reports of his recovery indicate that after the accident, he became a qualitatively different person. The damage to his left frontal lobe actually altered his personality. Dr. John Harlow, the town physician, wrote that "his contractors, who regarded him as the most efficient and capable foreman in their employ previous to his injury, considered the change in his mind so marked that they could not give him his place again." If the mind (i.e., self) exists as a truly separate entity, shouldn't it persist in its premorbid form following physical damage to the brain itself?

How Does This Relate To Mental Illness?
Knowing that the mind and brain are two sides of the same coin in no way implies a deterministic worldview, nor does monism remove free will from the conversation. The brain is highly plastic, and because of this, attentional control can alter neural pathways. However, this feedback mechanism should not be mistaken for a dualistic view. The mind does not exert power on the brain nor does the brain exert power on the mind. Mind is an emergent property of brain. Mental illness is a dysfunction of both sides of the coin, which is why some combination of medication and talk therapy is usually prescribed. And for those who think that this is purely a reductionistic, materialistic view of the self, let's not forget the central theme of gestalt psychology: the whole is greater than the sum of its parts. You are greater than the sum of your brain cells, although without them, you wouldn't be.