Judging by my limited time on the small, commuter trains that traverse to and from Venice, I've decided they have the unique ability to take an already depressed college student down a road of guilt and self-loathing within a matter of minutes. Venetian trains brought a state of mind that felt full and numb simultaneously. Maybe it was the constant stopping, dropping off the few Venetians who decided not to leave the collapsing city, or maybe it was just that: the city was sinking, and as the train left the station, it was all too easy to see these bridge-connected islands were about to fall into the ocean. Like depression, the city was a reminder that foundations crumble, especially under the façade of celebration and life.

With nothing else to do but stare at rain, I was forced to think about the reality I sat in. I spent the past month in Verona, experiencing a spiral of anxiety and depression. I did not know anyone on the trip before leaving. I figured I could make friends easily, and though I was close with one or two other students, my diseases got in the way. I was too anxious to finish a complete sentence when meeting new people, preventing me from making connections, thus leading to more loneliness and depression. This loop continued until I preferred to spend my time alone in bed, rather than out exploring the city or taking day trips to nearby Lake Garda. Labeling my ailment with headaches or fatigue, I grew accustomed to staying behind. The few times I could get myself out of bed, I grew so anxious that I eventually turned back, faking a stomach ache just to be alone again. 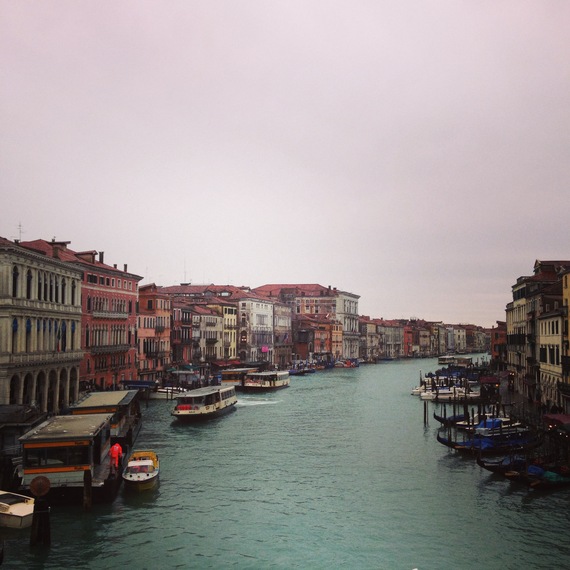 For most students, JanPlan is widely regarded as a time to party, since most classes are fairly easy and meet infrequently. If you stick around Mayflower Hill, life is relaxed for everyone but the handful of students taking intensive courses like EMT training. As a first-year student with no interest in spending a month watching Netflix and binge drinking in freezing, Maine weather, I decided to spend the month in Verona, Italy, studying twentieth century Italian literature with 20 other Colby students.

When I returned to campus in early February, everyone asked about the trip. "I'm sure you had an amazing time," said my friends and professors. "How could it be bad? You were in Italy!" Unable to correct them, I nodded my head and changed the subject. I continued this show for months, posting dozens of pictures on Instagram while trying to convince myself that the more I portrayed this "amazing" life, the more I would believe it was true.

When asked about it, I am still not completely honest about how I liked my first JanPlan experience. We do not like hearing stories about unhappiness, and much less about unhappiness in beautiful places. It would come off as ungrateful or snobbish for me to express the truth behind that month. Because mental illness is so taboo, I was concerned people would think it was a choice to be cynical, apathetic, or lazy, leaving me feeling horribly guilty about something I could not control. Although I knew depression was not my choice, and that it can hit whenever and wherever it wants, I lied through forced smiles because I was afraid of the way people would respond to my illness.

The assumption that studying abroad is the best time of your life needs to end. I recognize not all experiences are like this one; just a year later, I travelled to Uganda on a Colby program and truthfully loved every minute. But I am certainly not alone in my experience with mental illness, and it pains me to think about how many other college students are forced to come up with fake stories of their time abroad for fear of being labeled "unappreciative." Lydia Nicholson wrote about struggling with depression while abroad, citing the administrative changes that need to occur. She called on colleges to "include more information about support systems" and "teach self-coping and emotional regulation skills." Especially before leaving campus, colleges and their off-campus study programming need to address these problems at an institutional level.

Adding to Nicholson's argument, I believe campus communities can work to make change on a daily basis by learning how to respect mental illness after students return from programs. We need to support students who struggle and reduce the shame associated with mental illness. We can begin this process simply by asking, "How was your trip?" instead of the usual, "I bet you loved it." We must stop assuming experiences, and begin listening to, accepting, and embracing those who struggle.

I was supposed to be having the time of my life, but I did not. The guilt associated with having depression often felt as miserable as the disease, itself. By allowing our fellow students to be honest about their experiences abroad, we can lessen the guilt, allow for more open conversation, and build a campus culture of acceptance.