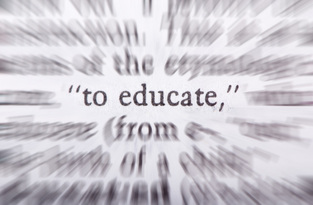 Recently, I was giving a talk on mental illness to a group of teachers. One of the teachers in the back raised her hand and asked why I was using the term, "mental illness," rather than "brain disorder." In fact, she seemed quite perturbed by the fact that I wasn't calling bipolar disorder a brain illness. She felt that I wasn't fighting the stigma around mental illness the way I should have been. I replied to her that while I, personally, do absolutely believe (and evidence supports) that bipolar disorder is a brain disorder, the term "mental illness" is the one that is generally accepted both by the populous at large and by the medical community and so is the term I use in my presentations.

But, more importantly, I don't believe that wordplay is going to erase the stigma surrounding mental illness.

People seem to have this mistaken impression that changing the name of something changes the way people feel about that thing. And while, this may work, to a small degree, some of the time, it certainly isn't the answer to a huge problem like the prejudice and discrimination seen against those with a mental illness.

All we have to do is take a look at the words we've already changed in our society.

For example, once it was acceptable to use the term "negro." We, as a society, no longer consider this acceptable. Now we use terms like "African American." And while this may be an improvement, it certainly didn't fix the prejudice and discrimination faced by people of color.

It's a similar story with homosexuality. People of all sexualities are finally starting to gain the rights they deserve in our society, but it is not only due to the fact that we no longer consider it acceptable to call people "faggots." It has to do with the extremely hard work done by activists to ensure that laws are passed to protect the rights of people of all sexualities.

And what people fail to realize is that any term can be stigmatized. I can slight any group of people in the world just by the tone of my voice. "Oh, you're a postal worker." This isn't because there's anything wrong with the words or the people. It's because prejudice knows no bounds and doesn't care about political correctness or mere wordplay.

Now, if the American Medical Association and the American Psychiatric Association came out tomorrow and declared that mental illnesses would henceforth be known as brain illnesses, I would be perfectly happy with that. But I don't think we should be holding our breaths for major changes in medical terminology and language. Instead we should be fighting the stigma, discrimination and prejudice as it exists today -- no matter what people are calling it.