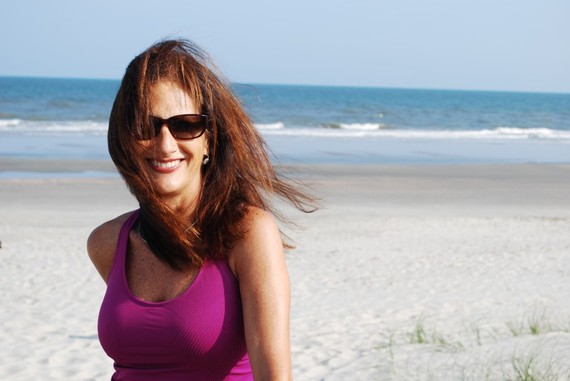 It doesn't take much to make me happy ... a place in the sun will do!

"Year by year we are learning that in this restless, strenuous American life of ours vacations are essential." -- Ellsworth Huntington

Is it time for you to take a vacation, a mental vacation?

Last Thursday night, I was floored by an unexpected bout of food poisoning. The episode hit me at night and left me delirious. I lost a day in time and was confined to a dark bedroom as the hypersensitivity and headache worked their way out of my body.

Forty-eight hours later, I crawled downstairs and turned on the TV. It was my first attempt to rejoin the world.

The remote was set to CNN and for the next half hour, I watched unbroken coverage of two unhappy reports: The first involved a Dallas police headquarters shooting and the second was the revisiting of a racially-charged event from Chicago.

Still emerging from my personal tomb of quietude, I felt acutely accosted by the information, expert opinion and commentary flowing out of the TV screen. My body and head were still hurting, but the mental onslaught from this type of "news" further contributed to my fatigue.

"Is this what most Americans are being fed, day in and day out?" I wondered.

What a drain on the soul and what a disincentive for hope.

Lying on my back, I considered the 24/7 social media hum that energizes our world today. How much negative news was commanding center stage, competing for our attention and corrupting us with notions that fueled everyone's sense of fear and distrust?

Where was the space in which good news was reported and advanced?

I wanted the refreshing light of unity, an example of higher ideals on display.

It might surprise you to learn that Huntington's above quote was penned a long time ago. Yale educator Ellsworth Huntington (1876 - 1947) was a professor of geology and a former president of the Ecological Society of America.

From my horizontal position on the living room coach ingesting CNN's spill of the news, it became evident that Ellsworth Huntington was on to something.

His words echo as even more essential for us today:

"Year by year we are learning that in this restless, strenuous American life of ours vacations are essential."

I hardly welcomed that food poisoning episode. But I'm appreciative of the rare glimpse it provided into just how restless -- and overburdened -- our society has become.

Only we can take it upon ourselves to change the tempo and the tide.

Whatever the time of day or day of week, may you give yourself space to rediscover and connect with your personal happiness.

It'll be good for you -- and will surely benefit society, too!