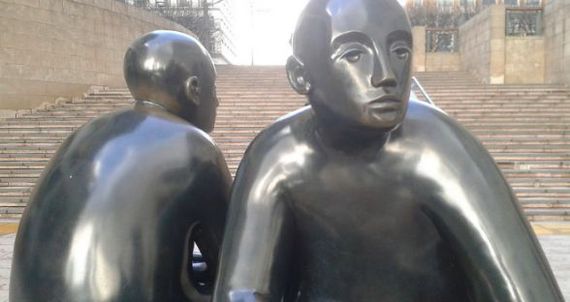 In my 20s, after a bad breakup, I found myself adrift in a medium-sized Midwestern college town, trying to get my head together. With no connections to the university, no family, almost no social circle, a Bachelor's degree, and some experience in food service, I nevertheless decided to stay put until deciding on my next career move.

I was heartbroken over losing the love of my life, but even at that age knew enough not to leave town until I had something to move towards. So I worked restaurant jobs and stayed in rooming houses -- single-room occupancy dwellings where four or five men would live sharing a kitchen and bathroom, which were the only places I could afford. I worked overtime, drank too much, ate pasta cooked from an electric hot pot, and stayed up late at night brooding. I saw a therapist who refused to believe I was broken, in spite of my insistence that I was. Occasionally I contemplated suicide.

The men in the rooming houses came and went, but one guy name Ryan stuck around. During the course of about a year, Ryan and I became close friends. He was tall, dark, and lanky; he chain-smoked, and though friendly, he was odd. He didn't show a lot of emotion. He'd sleep until well into the afternoon, and rarely needed to be anywhere. In conversation he'd occasionally miss the point completely, or he'd interpret something I said totally out of context. He sometimes had to think for a long time before responding to something, and every so often he seemed distracted, almost as though there was a lot of noise my room, even when it was completely quiet. But all those moments were rare, and never stopped him from being a great friend.

Ryan would visit my room late at night and keep me company while I brooded. Unlike my family, he didn't try to fix my dark moods or tell me to get over my breakup. And sooner or later, when my mood had run its course, we'd get around to other topics. We'd talk about women, about music (he was a big fan of the Who), about family. Ryan was a local, born and raised a few miles outside of town; he'd sometimes spend weekends with his parents.

When I asked him what he did for a living he said he was on disability. Though he had no visible disability, the code we residents had between us prohibited further questions. Ryan paid his rent, his telephone line was usually on, and he always was able to pay his share whenever we ordered a pizza or grabbed a beer at the local bar.

Under different circumstances, we might have become bank-robbers or alcoholics. As it happened, we turned into dreamers. We'd stay up all night drinking and talking about what we wanted to do with our lives. Sometimes he said he wanted to be a health technician; other times, a paralegal. We argued about religion; though we had both been raised Catholic, he was a believer, and I was starting to notice some harmful effects religion had had on me. We created a rap song; he wrote it, I sang it.

Once we impulsively decided to drive four hours to Chicago, which we'd never seen and which we'd always wanted to visit. We turned around near the state line, after discovering we only had $20 between the two of us -- not enough even for gas, let alone anything else.

Another time, I was straightening up my room as we were chatting, and came across a love letter from a girlfriend I'd dated prior to my most recent ex. On seeing the flowing, feminine handwriting, Ryan asked me who it was from. I put it hastily away, saying, "It doesn't even mean anything anymore." He said simply, "Why do you still keep it, then?" I had no answer.

A couple of times, Ryan disappeared from my life, and from the house, for a few weeks without notice. But he'd always come back looking good. He seemed more connected to us, he was relaxed, and his odd moments were rarer. He evaded my questions when I asked where he'd been. "Vacation," was all he'd say.

All this time, my work with the therapist was deepening. Our sessions were giving me strength in the way water gives strength to a tree after a long draught. This man never gave up on me, even in my darkest moments. At some point, I stopped viewing him as a therapist and began to see him as something like a mentor. One evening, I began our session by announcing that I was applying to graduate schools, and that I'd chosen some back East, to be near my family. I asked him if he'd write one of the recommendations on my application. To my astonishment, he agreed.

Ryan and I lost touch after I moved back East. We corresponded occasionally, but I wrote to him less often as my workload increased, while his letters became shorter, less frequent, and eventually stopped altogether. As I studied and began doing outpatient psychotherapy with people with mental illness, I saw symptoms in the people I was working with that were strikingly similar to what I'd seen in Ryan -- the so-called "negative" symptoms of schizophrenia. As a young adult, Ryan's symptoms had probably emerged only recently -- four or five years before we met -- and his "vacations" were most likely hospital stays.

My suspicions didn't have any effect on my memories of him, but they did have an effect on my work with patients. I had a difficult time with the prevailing wisdom of the day that saw patients in terms of their diagnoses. I had very little interest in someone's diagnosis. I spoke with patients at the wrong times, and in the wrong places. I held "sessions" on the street, in patients' hospital rooms, and in stairwells. My first-year field placement supervisor spoke with me more than once about "boundaries." But through it all, I thought of my therapist, who played by a different set of rules, and of Ryan, with whom I never had to play by any rules at all.

Now the emphasis is on wellness and person-centered care -- and more than that, on advocacy, patient satisfaction, and patients taking an active role in setting their goals. Mental health professionals everywhere recognize that there was something wrong with the system the way it was. Keeping someone out of the hospital is no longer considered the loftiest goal possible; people are being encouraged to think, and talk, about fulfilling work, just the way Ryan and I did.

Some mental health professionals are invested in doing things the old way. But there are just as many who are willing to try new approaches. Thank God, I say. Ryan and I never once talked about treatment. He never even admitted to me that he had a mental illness. But he taught me more about mental health and wellness than most degreed people I know.

Ryan, I don't know whether you're still out there. I'm not sure I've remembered all the details correctly, or that you'd even want me to. But if you're around, I hope you've found all the things you sought in life, and I hope you treasure the memories of our good times as much as I do.

Also read: Why Men's Friendships Can Sometimes Feel So EMPTY

More:
healthy livingmens mental healthStronger Together
Newsletter Sign Up
An essential daily guide to achieving the good life
Subscribe to our lifestyle email.
Successfully Subscribed!
Realness delivered to your inbox