While widely used, more often than not, mentoring programs are woefully ineffective in serving the needs of men of color. For instance, Shaun Harper, associate professor and director of the Center for the Study of Race and Equity in Education at the University of Pennsylvania conducted interviews with 219 Black men at 42 postsecondary institutions and found that "no participant attributed even a fraction of his college achievement to a [mentoring] program that systemically matched him with faculty, staff, or peers with whom he was to routinely meet."

That being said, mentoring programs, when designed and executed correctly, can be a useful strategy for facilitating student success. Few (if any) could argue that they succeeded in their collegiate endeavors without receiving mentorship from others. With this in mind, we offer three recommendations for designing 'effective' mentoring programs. 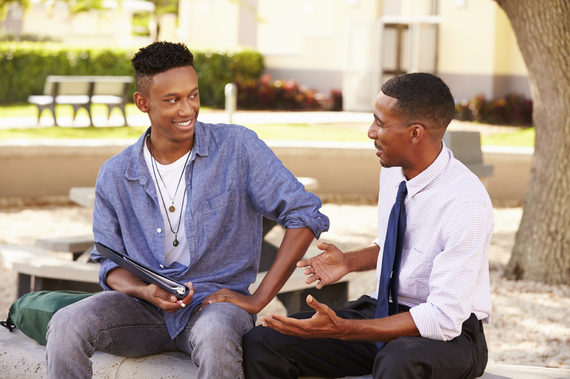 Mentoring Programs Should be Inquiry-Driven

Mentoring is a tool that can enable educators to meet the needs of the students they serve. However, mentoring program objectives are often loosely defined. Educators should be clear as to what objectives the mentoring relationship is designed to achieve. Too often, mentoring programs merely link men of color with mentors who are to spend time with one another with an unspecified purpose. Before beginning a mentoring relationship, students' should be assessed to determine the factors that influence their academic success. The assessment can take the form of a survey, interviews, focus-groups, written feedback, or analyses of students' academic records, which will enable program leaders to determine the primary challenges facing students. Based on this feedback, mentoring should be viewed as the medium by which identified challenges are addressed. For example, during a survey, it may be revealed that self-confidence, awareness of campus resources, and lack of clarity around goals are common challenges faced by men of color. Armed with this information, the mentor intervention should focus explicitly on building confidence, introducing students to campus resources, and engaging students' in introspection and exploration about potential major and career goals. Using this approach, mentors are not merely mentoring for the sake of 'mentoring', but mentoring with a clear objective in mind. While inquiry must occur to determine the focus of the mentor engagement, inquiry should also take place throughout the program to determine the effectiveness of the intervention.

Mentoring Programs Should be Activity-Based

Typically, mentoring programs are structured to provide "once a week" meetings between mentors and protégés to discuss how the protégé is doing. These meetings can become stale, static, and one-sided. Instead of this model, mentoring should be organized around targeted activities. Specifically, mentors and protégés should meet to accomplish tasks that will lead to tangible products that are produced from the mentoring experience. For example, the Minority Male Community College Collaborative operates a research-based mentoring program. Each protégé is linked with a mentor (an advanced student under the guidance of a faculty member) who coaches them on how to design a study, collect data, analyze data, and write up a research report. Students then co-present their research and co-publish their results with their mentors. This mentor model is effective because the products (i.e., conducting, presenting, and publishing research) are the focus on the mentor-protégé relationship. There are many other examples of activities to organize mentor models around. Service learning projects, planning an event series, internships, externships, creative projects, and other high impact practices all serve as apt activities for promising mentor-protégé models.

Mentoring Programs Should Employ an Organic Approach to Matching

One common strategy employed by mentor program leaders is to link mentor faculty, staff, administrators, or students with protégés based on same race and/or gender affiliation and superficial similarities. Almost entirely, protégés' are matched with mentors with little to no input in who they want to be mentored by. This formal matching process can produce mentor-protégé pairs that have little in common and/or lack a full commitment to one another. For example, a question often posed is whether women should be permitted to mentor male students of color. Well, some men of color may be more open to mentoring relationships with women than they are with men, particularly if they have had poor relationships with their fathers and other male figures while having closer relationships with mothers, aunts, and grandmothers. Similarly, some men may prefer to be mentored by a man as the relationship may allow for 'different' types of conversations than may be had with women. Either way, who college men of color want to be mentored by should not be assumed. Organic matching is a clear and suitable alternative to the formal matching approach. In organic matching, mentors and protégés are allowed to self-select who they want to be paired with. Using this approach, program leaders can provide participants with several opportunities to meet mentors in group settings to allow for one-on-one engagement to jointly determine fit. Over the course of a few matching events, mentors and protégés can identify and rank order who they want to work with and be paired accordingly.