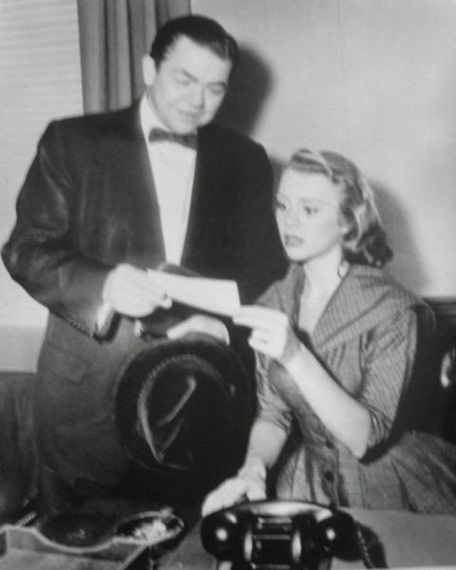 If you grew up in the '50s you probably recall a television series called The Millionaire. The millionaire was an eccentric named John Beresford Tipton, Jr. who sat in front of a roaring fire with his back to the viewer. You never saw his face. He was the prototype of the social experimenter. It wasn't so much that he necessarily thought money was everything, but more that he wanted to see what money did to people. Every week he handed an envelope to his amanuensis, Michael Anthony (Marvin Miller) who then changed people's lives. The Millionaire made millionaires, but the show was a form of Mephistophilian reality TV. Good fortune didn't necessarily befall those who sold their souls for maybe not the knowledge but for the power that money confers. While The Millionaire played, another show with a similar structure, but a totally different payoff also aired. That show was Crossroads and it began with two intersecting paths followed by a beam of light towards which a man of God walked. "Each Crossroads story is based on the actual experiences of American clergyman, pastor, priest or rabbi, the men who give inspiration and guidance to people at the crossroads of life," ran the narrator's voice over. Like in The Millionaire, the cleric was a deus ex machina (literally in this case) who intervened into the lives of your average Sally or Joe and sometimes these clerics had their own problems too. However, the gift in this case was not a million dollars, but God. Oedipus of course attempting to escape fate ended up slaying his father, Laius, at the crossroads and marrying his mother Jocasta when he got to Thebes. Neither the script writers for The Millionaire or Crossroads aspired to the that level of tragedy, though most of their characters suffered from hamartia or a tragic flaw that neither money nor God was always able to solve. It would have been fun if the two shows could have mixed and matched with God, for instance, taking up where the powers of money left off.