Who knew dinosaurs could be so frilly?

Researchers at the Cleveland Museum of Natural History and Royal Ontario Museum in Canada have identified a previously unknown species of horned dinosaur after studying fossils collected in Montana and Alberta, Canada. Mercuriceratops gemini, named after the Roman messenger god Mercury, lived about 77 million years ago, during the Late Cretaceous Period.

What makes this plant-eating species -- and its new genus of ceratopsian -- particularly interesting is the large frill on the back of its skull. Unlike other horned dinosaurs from the period, Mercuriceratops had a neck shield that featured two protruding "wings" much like the winglike embellishments on Mercury's helmet. 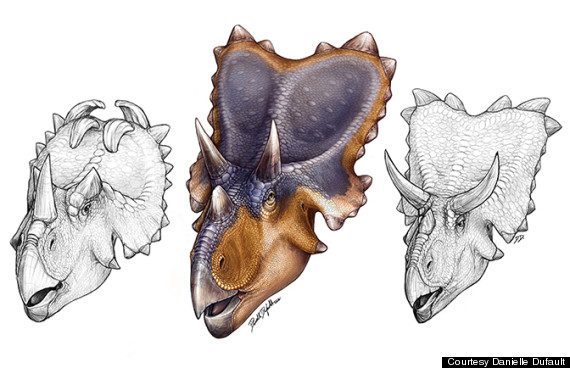 "The butterfly-shaped frill, or neck shield, of Mercuriceratops is unlike anything we have seen before," Dr. David Evans, curator of vertebrate paleontology at the Royal Ontario Museum and a co-author of a new paper on the discovery, said in a statement. "Mercuriceratops shows that evolution gave rise to much greater variation in horned dinosaur headgear than we had previously suspected."

The ornate embellishments on the heads of horned dinosaurs served not only as protection but also as a means of identifying other members of the species. So it's likely that Mercuriceratops stood out among other dinos of the era, which may have given males of of the species an evolutionary advantage in finding a mate.

The first fossil of the Mercuriceratops specimen, an oddly shaped skull bone, was uncovered in north-central Montana in 2007. It was moved to the Royal Museum in Ontario. In 2012 another unusual skull bone was found in Alberta. It wasn't until some time later that Dr. Michael Ryan, the curator of vertebrate paleontology at the Cleveland Museum of Natural History and the lead author of the paper, noticed that the two skull fragments were nearly identical. 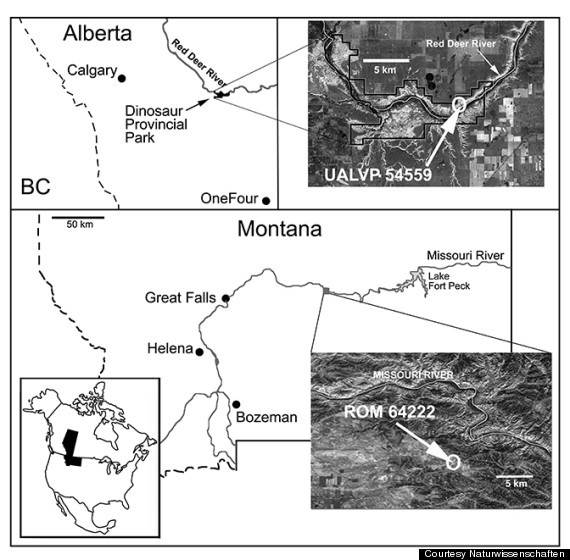 Once the team compared the fossils, they realized the specimens were from the same type of dinosaur -- one unlike any other species known to science. 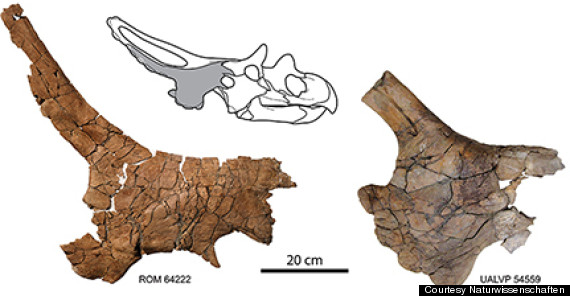 Mercuriceratops gemini skull fossils from the right side of the frill. Courtesy Naturwissenschaften. (Image via Cleveland Museum of Natural History)

The paper on Mercuriceratops was published in the journal Naturwissenschaften.