One of the most dangerous yet confusing toxic pollutants is mercury in seafood. Mercury is very bad for developing fetuses and children, and seafood is very good for them. But mercury is in all seafood. Like I said: confusing.

Last summer a friend caught a quite large bigeye tuna, over 200 pounds. He gave me a big chunk, about 20 pounds. Knowing that such a big, old fish would be pretty high in mercury, I started whittling away at it just a little at a time. My friend was eating a lot of this fish for the next several months, so much so that I advised him to get his blood tested. There's no sharp line between "safe" and "unsafe" levels of mercury in the body, but the average adult has a blood level of about 1 microgram per liter, and anything above 5 micrograms per liter is considered too high. When he called me saying he had over 40 micrograms per liter, I went to my doctor. My level was 24. I'm now off fish for several months. OK, so I was headed toward vegetarian anyway.

I recently spoke with Ned Groth, an environmental health scientist formerly with Consumers Union, and Michael Bender, co-founder of the Mercury Policy Project (MPP). Bender's group is suing the federal government in an attempt to update mercury guidelines that Michael says are out of date and not reaching the folks who need them most -- pregnant women and heavy fish eaters. It was time for me to understand more about mercury in seafood. What I learned might help clear up some confusion over risks, and how to eat seafood safely.

Mercury in ocean fish comes from natural and human sources. About two-thirds of each year's new mercury comes from human sources, especially coal combustion. Mercury is an impurity in coal.

From the air it falls into water where bacteria convert it to a form called methylmercury that gets into living things and builds up in them. Plankton with mercury get eaten by little fish, and little fish get eaten by bigger fish. A big fish has gotten a dose of mercury from every little fish it's ever eaten. If you eat it, it will pass that combined dose on to you. So hint #1: bigger fish and older fish have more mercury, because it accumulates up the food chain.

Ned says that among commonly consumed fish and shellfish, some kinds have 100 times more mercury than other kinds. The highest levels are found in larger, longer-lived predatory fish such as shark, swordfish, tuna, marlin, and grouper.

The developing brain is especially sensitive to mercury's effects, so pregnant women and young children are the main at-risk group. But the danger falls mostly on people who eat larger than average amounts of fish, and those who eat higher-mercury varieties like those just listed.

The more fish a person eats, the more aware they need to be of the mercury content of their fish choices. Ironically people trying to "eat healthy" can end up with more mercury -- including people who eat fish instead of meat and poultry; people pursuing a "heart healthy" diet; seafood lovers who eat fish multiple times a week; and recreational and subsistence anglers who eat what they catch.

I asked Ned, "What does mercury actually do to people? Are people getting sick?

He explained that methylmercury harms the nervous system to differing degrees depending on how much mercury is involved. The dose you get depends on two things: how much mercury is in the fish you eat, and how often you eat fish. One meal of high-mercury fish isn't going to kill you, but lots of continual eating of moderate-mercury fish can cause your mercury level to rise and cause problems.

At very high exposures, people can lose their ability to walk, speak, think and see clearly. At slightly lower -- but still far above average -- exposures, brain functions like reaction time, judgment and language can be impaired. Perhaps one percent of adults with the highest mercury exposure may suffer subtle brain function effects. 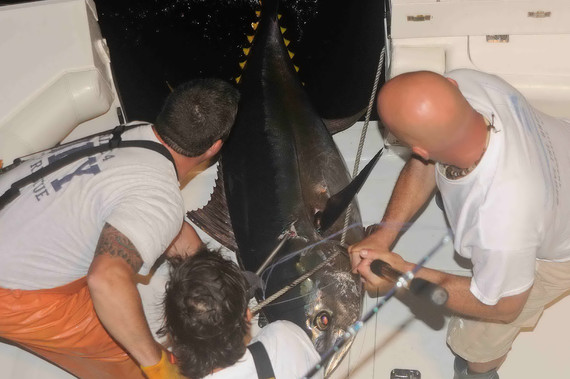 This big tuna was a surprise; the bigger surprise was how much mercury we got from it. Photo by Carl Safina

A recent study in Florida looked at memory, reaction time, decision-making and other brain functions in healthy seafood-loving adults. Those with blood mercury below 5 µg/L had the best cognitive functions. At blood mercury levels of 5 to 15 µg/L, several brain functions were mildly impaired, and at levels above 15 µg/L they were significantly impaired. Beyond that Florida study, several well-documented case reports have found severe symptoms of methylmercury poisoning in adults who ate higher-mercury fish 5 or more times a week.

You wouldn't necessarily know if your baby would have been just a little smarter. But when developing babies are exposed to relatively ordinary amounts of mercury in the womb, their intelligence, language and thinking abilities can be mildly reduced.

Mercury may affect the brains of several hundred thousand children born each year. Those at greatest risk for all these effects are people who eat the most fish, and who choose large fish, such as swordfish and tuna, whose predatory lifestyles cause them to accumulate high mercury levels. Ned emphasizes that risk is proportional to dose, and that fish is good but mercury is bad.

"In the last 10 years," Ned says, "at least a dozen studies, in nine different countries, have found adverse effects on brain development from very low doses of mercury, the kinds of doses associated with ordinary levels of fish consumption. That research shows that current safety guidelines do not protect public health. And yet many of the studies have also shown that fish consumption during pregnancy improves brain development -- which highlights the importance of guiding women to eat low-mercury fish."

When I asked Michael about MPP's recent lawsuit, he explained that they were suing the FDA "...because about 10 percent of the U.S. population--including many children, pregnant women and women of childbearing age, in particular--have mercury levels above the levels currently recommended for fetal and child health. We want the FDA and other responsible agencies to do a better job of informing pregnant women, heavy fish eaters and parents of young children about which fish have the most and also the least mercury, so they can make informed choices."

For us, for now, the trick is simply to choose low-mercury fish and shellfish. Many popular seafood choices are low in mercury, including salmon, shrimp, tilapia, clams, mussels, scallops, oysters, sardines, trout, pollock, flounder, sole, catfish, squid, anchovies and herring. Armed with the facts, consumers can enjoy seafood often and keep their mercury exposure very low.

Anyway, I'm staying off fish for a few months and then I'll get my blood checked again to be sure my mercury level is down. My boat goes back into the water in May.

Here is more info on mercury in seafood from Blue Ocean Institute.