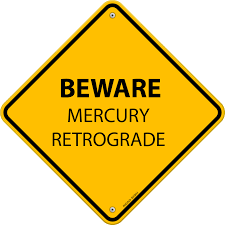 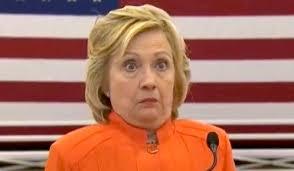 It's time to prepare yourself for the next 3 weeks when Mercury goes retrograde and the world goes haywire with all kinds of communication problems. This one will be a doozy because secrets and misbehavior will be exposed, especially among presidential candidates and world leaders.

This retrograde will be unique because Mercury's retrograde (from April 28 to May 22) will be in the sign of Taurus. Each retrograde, and the way it affects people in the outer world, is characterized by the sign Mercury retrogrades in. The astrological sign, Taurus is known to be an earthy, rigid, practical and "no non-sense." As the excellent astrologer, Clarissa says,

"Taurus does not need sixth sense as it is strongly in tune with its physical senses. It knows what it sees, smells, and hears. Taurus does not need to overly complicate things; it knows that - if something looks or sounds off - that it is off. This fact, will be become clear to all who observe the happenings in the world over the next three weeks.

"The transit of Mercury through Taurus coincides with a very active time in 2016, a time when we're more gung-ho and high strung, irritated with things not working out as we imagine they should (such as our politicians). For that reason Mercury in Taurus will be very irritating to many. But, it's not for nothing. Mercury in Taurus sees the need for thoroughness in collecting data and the dangers of rushing into new endeavors uninformed," (such as accepting a presidential candidate at face value). In this Mercury retrograde mental frustrations will peak.

Mercury in Taurus says, "Hey...not so fast because I'm not done checking you out and making sure you're the real deal!"

To add to the upsets and conflicts occurring over these three weeks, is the fact that the planet, Mars went retrograde on April 17th.

The great astrologer and cycles analyst, Ray Merriman, describes Mars retrograde, this way: it's when you put on your brakes after discovering you have gone way above the speed limit. The police car up ahead notices this too. Quickly, calm down and don't lose your temper, as the officer approaches your vehicle. He is not smiling. This may be no win-win situation, so be careful not to make it worse than it needs to be." Arguing will not work or get you out of the ticket!

Along with Mars retrograde, is the very significant astrological placement of Pluto being in the sign of Capricorn. That means - "it's karma, for past corruption. It's the Panama Papers, being caught and exposed for all kinds of stupid things you did in the past."

Bret Stephens, in the Wall Street Journal article ("'C is for Corruption," April 5, 2016), writes, "The story here (about leaks of the Panama Papers) isn't about tax evaders and offshore accounts, deplorable as they may be. It's about public polices and incentives that make a career in politics an expedient route to personal enrichment."

With Mercury retrograde (along with the influence of Mars retrograde), you can expect fighting over past issues, and lots of news and information concerning misbehavior, and the abusive influence of money and wealth in politics. It's often a time when a discovery about someone's misdeeds are revealed. Over these three weeks, it's very possible that Hillary Clinton will receive bad news concerning the FBI's investigation into her emails.

What Is Mercury Retrograde?

Ok. Let's return back to Mercury retrograde and its affect on your life. For those unfamiliar with the cosmic event called Mercury Retrograde, here's what you need to know. The planets in the cosmos exert a unique influence on us, and the world we live in, much the same way at the Moon affects the tides. The planet Mercury rules our intelligence, mind, memory and, all types of communication ranging from talking and texting to writing. It also affects our self-expression, and communication style. In a more public sense, it rules commerce, computers, telephones, transportation and air travel.

How Mercury functions in a person's birth chart explains a great deal about how they think, formulate ideas and communicate them. It indicates how someone makes sense of the everyday world they live in. During these three weeks when Mercury is retrograde, one's mental faculties and communication skills are not functioning well; in fact they seem to mal-function.

When this unique event happens (3-4 times a year), communications of all types go awry, haywire, or even crazy! Unexpectedly, normal communication becomes unreliable, filled with misinformation where important data is missing or misunderstood. The passage of information from one person to the other seems to be unintentionally cloudy or confusing in some way.

Why would this be the case? The answer becomes clear when you understand that Mercury rules the mind, mental clarity, talking, self-expression and overall communication. During the Retrograde period, Mercury, which rules a person's intellectual, communication and mental processes - are less acute. They become dull, careless, mistake-prone and forgetful.

The result is that any action one takes or decision one makes during the retrograde don't have the intended result. In fact, they often fail or seem sabotaged. As a result they will have to be re-done or restructured in some way when the Retrograde period ends on May 22nd and Mercury goes direct. Meanwhile, here are some tips to help you avoid the typical problems that occur during Mercury retrograde.

7 Tips to Avoid Frustration and Disaster

1. Watch Out for Accidents. Because people aren't thinking or in a hurry, there's a higher propensity for accidents to occur out of the ordinary. Over these three weeks, be mindful of circumstances where you're likely to be careless because you're under stress or engaged in risk-taking activities. During the retrograde you'll often read about athletes who have weird accidents or unexpected injuries.

2. Avoid Arguing or Fighting. That means even if you love to debate - do your best impression of Mahatma Gandhi during the retrograde. Don't argue with anyone in your day-to-day life, especially, lovers, friends, co-workers or your boss. No matter how well you normally communicate with these people, you'll find yourself misspeaking, saying the wrong thing and having disagreements you don't normally have. There is a very high propensity for mutual misunderstanding. Avoid being critical or to trying to push your own agenda. This is a time to listen to those you interact with. Be willing to throw out fixed ideas and agree to have an open discussion without trying to reach a final decision on any matter.

3. Delay Buying Boats, Cars, Motorcycles or Bicycles. Since Mercury rules transportation, any driving vehicle you buy is likely to be unreliable in some way; so it's not an ideal time to buy one because it may be a "lemon." Instead, research your favorites, test drive them, and then go home and evaluate your choices. Be ready to make your decision when Mercury goes direct.

4. Minimize Travel. These days, traveling is already filled with built-in hassles and stress. But they are amplified far more during these three weeks. If you can't put certain trips on hold, just be aware that you can expect an unusual amount of last-minute flight cancellations, meeting postponements and long transportation delays. Allow extra time when traveling; make sure your bags are very secure. Take extra precautions, because during this time they're more likely to be lost or stolen. (I bring my bags on the plane for this reason.) Re-confirm your reservations. Be patient and practice acceptance of the fact that inefficiencies are part of the retrograde. Slow down.

5. Don't Purchase Electronic Equipment, especially computers or phones. The planet Mercury rules computers and communication devices such as phones. When it goes retrograde, equipment of all kinds, suddenly do not operate correctly. Your fail-proof computer crashes or you end up buying the "computer from hell" - the one that had a defect when it was made at the factory. If you need to buy equipment, make sure to get a long-term warranty. Expect glitches to occur with any new software you install. Since hard drives can fail more often during this period, make sure to back them up ahead of time.

6. Hold Off Starting a New Project. This is not a fortuitous time to launch a new enterprise; it's a time for considering and evaluating it. While it's a great time to discuss a new idea, it's not a good time to make that "big presentation," that requires the support of others. During the retrograde people may either not understand it or oppose it. Or, you may find out later you left out a vitally important detail that you didn't think of. If your project is adopted, it may either fail or have to be totally restructured at a later date to succeed.

7. Avoid Signing Commitment Agreements. You're likely to skip over important details and regret it later on when you realize what you've forgotten. There's something you don't know that you'll find out when Mercury goes direct. For these reasons, it's a horrible time for negotiating contracts or making decisions. Avoid entering into any agreements or signing any legal documents unless you're prepared to make serious revisions in the future.

Wait until Mercury goes direct on May 22, to take action and make important decisions. When that happens, clearer communication will return, important data can again be relied on, and you'll see matters with crystal clear vision. You'll possess important information you didn't know while Mercury was retrograde. This new knowledge will help ensure you're making a correct decision. If you heed this cautionary advice, you'll have less frustration, fewer mistakes and disappointing failures during these three weeks.

If you want to know if you were born with Mercury Retrograde; and where your personal transits are in your Horoscope - to see if they are affecting your life, go to the Free Transit Calculator and enter your birth date. And, if you're curious to learn what your Horoscope says will be happening in your future - this year, in such areas as your love relationships, and marriage prospects, as well as career, investments and health in 2016: Order your customized Report: Your Horoscope & Future in 2016.

If you want to learn about your unique personality, strengths, weaknesses and talents you were born with, order your: Personal Horoscope Report. It includes a copy of your birth chart.

If you're in love and want to find out if you're really compatible for marriage (or partnership) with another person, go to the FREE Love Compatibility Calculator and enter your birth date and theirs. And, if you want a customized report on your compatibility together, order Your Love Compatibility Report.