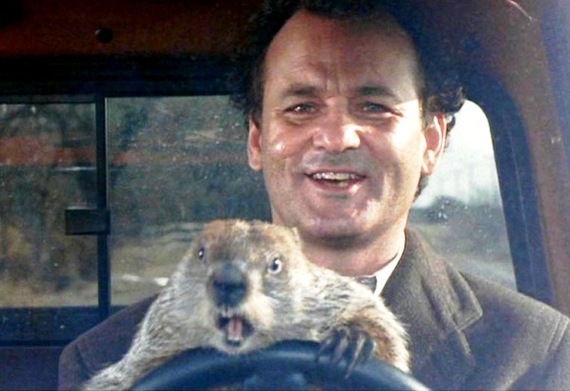 I feel a bit like the "astrologer version" of Punxsutawny Phil, the legendary groundhog in the movie Groundhog Day, who emerges each spring from his burrow to announce whether - weather conditions will be good or bad.

Less dramatically, as I step out of my home in San Francisco and look in the skies, I see planetary weather that could be problematic, because...from January 21 to February 11, Mercury will again be retrograde. So, I have to warn you, it's "groundhog day" again!

I want to help you avoid the frustration and annoyance from this event felt by Phil Connors, the main character in the movie played by Bill Murray. Unlike him you are not "doomed to spend the rest of eternity" plagued by the problems of Mercury retrograde. However, you can expect to be a bit challenged for the next three weeks as the world seems to go haywire with unusual communication problems, misunderstandings, out of the ordinary delays and equipment breakdowns of all kinds. In addition, you can expect upsetting problems occurring in our stock market and economy, as well as politicians with bad ideas and inept solutions.

For those people who are not familiar with Mercury retrograde (such as those living in a cave, being held captive by aliens or because no mention of it appeared in the Wall Street Journal), please let me briefly explain.

The planet Mercury rules our intelligence, mind, memory and, all types of communication ranging from talking and texting to writing. It also affects our self-expression, and communication style. In a more public sense, it rules commerce, computers, telephones, transportation and air travel.

How Mercury functions in a person's birth chart explains a great deal about how they think, formulate ideas and communicate them. It indicates how someone makes sense of the everyday world they live in. During these three weeks when Mercury is retrograde, one's mental faculties and communication skills are not functioning well; in fact they seem to mal-function.

When this unique event happens (3 times this year), communications of all types go awry, haywire, or even crazy! Unexpectedly, normal communication becomes unreliable, filled with misinformation where important data is missing or misunderstood. The passage of information from one person to the other seems to be unintentionally cloudy or confusing in some way. A person's intellectual, communication and mental processes - are less acute. They become dull, careless, mistake-prone and forgetful.

The result is that any action one takes or decision one makes during the retrograde don't have the intended result. In fact, they often fail or seem sabotaged. As a result they will have to be re-done or restructured in some way when the Retrograde period ends and Mercury goes direct.

The traditional advice I've written about for years should still be regarded: don't start projects; don't sign contracts; don't get married; don't buy equipment or a new car; and avoid travel. And, be ever vigilant for mis-communications and mis-understandings. Oh yes, one last thing: expect delays and be patient.

Why This Retrograde is Extremely Unique

Each Mercury retrograde has a certain flavor and character based on the sign that Mercury is in when it goes retrograde and the sign that it ends up in when it goes direct. They are often different signs. This retrograde is unique in that Mercury will start out in the "air" sign of Aquarius and end up in Aquarius. In astrology there are four "elements": Fire, Earth, Air and Water. This retrograde is even more unique because Mercury retrograde periods only occur in the same "element" (i.e. Fire, Earth, Air, Water) sign approximately every seven years.

What's even more noteworthy is that the Sun will be entering this same air sign of Aquarius the day before, January 20; and when Mercury turns direct on Feb 11th the Sun will still be in Aquarius. Why is this all so significant?

As you may recall, during 2008, the stock market was crashing and world economies were being brought to their knees. Panic and fear occurred in all the financial markets. There was confusion and upset among politicians and our government as to what to do. As one would expect, since it was during the retrograde, many bad ideas were turned into poorly thought-out, expedient solutions. It's taken us years to dig "partially" out of that economic hole and the turmoil created during those times.

Once again, we have Mercury retrograde in the air sign of Aquarius during an ominous time in the world and in the financial markets. Be sure to pay attention to your investments (as in: "It's January 21st. Do you know where your money is?") But how is this Mercury retrograde likely to affect your communications and interactions during the next three weeks?

One of the positive qualities of Mercury in the air sign of Aquarius is that people are likely to express their humanitarian side by being more empathetic than usual. Unfortunately, they will also have a tendency to stubbornly believe they are right. There is a mental arrogance often at work when Mercury is in this air sign. It becomes hard for people to admit when they're wrong and have made a mistake. ("It's not my error. I'm sure of it.")

People will get attached to ideas that won't work, especially ones that seem new and innovative to them. In fact, in an effort to correct a mistake they've made, they will come up with a method to fix a problem that actually makes the problem worst. That's what you can expect during this Mercury retrograde.

Imagine someone losing the package you ordered. Instead of saying, "Sorry, let me send you out a new package, they're likely to come up with some ridiculous suggestion to remedy the problem. ("Since our delivery person couldn't find your apartment, why don't we send the package to your sister's home. Then she can call you when it arrives and you can drive over to her house and pick it up.")

Eventually, when this retrograde is over, the more positive side of Mercury in Aquarius will take over. The ideas and solutions that are proposed are truly innovative and better thought out, and more likely to work. They are likely to be both brilliant and practical solutions.

Wait Until Mercury Retrograde is Over

Wait until Mercury goes direct on February 11, to take action and make important decisions. When that happens, clearer communication will return, important data can again be relied on, and you'll see matters with crystal clear vision. You'll possess important information you didn't know while Mercury was retrograde. This new knowledge will help ensure you're making a correct decision. If you heed this cautionary advice, you'll have less frustration, fewer mistakes and disappointing failures during these three weeks.

If you want to know if you were born with Mercury Retrograde; and, where your personal transits are - to see if they are affecting you, go to Free Transit Calculator and enter your birth date. And, if you're curious to learn more about your personal Horoscope in 2015 and what it says about your love relationships, career, investments and health: Order your customized Report: Your Horoscope & Future in 2015.


Larry Schwimmer is an astrologer in private practice. For private consultations on your compatibility with someone, contact him at: Larry@astrodecision.com or go to www.AstroDecision.com

Read Larry Schwimmer's latest books, What the Hell is Going On in My Life? Using Your Birthdate to Find Answers About Relationships, Career, Money, Sex & Health;and How To Ask For A Raise Without Getting Fired - And 24 Other Techniques For Resolving Conflicts At Work & In Life; and Winning Your Next Promotion In One Year (Or Less!).

Larry Schwimmer is president of Astrodecision.com, a San Francisco-based consulting company. The firm uses planetary cycles analysis to counsel individual and corporate clients on picking the "best dates" to make successful decisions of all types: personal, marketing, financial, and political. The firm currently advises a diverse client base that includes politicians, presidents of major corporations and an MLB baseball team. Schwimmer is an internationally known business consultant, life coach and astrologer (with a Fortune 500 M&A background). Visit his website: www.astrodecision.com