There is a universal principle of childhood physics that we all remember well: the joy of spinning in circles. Perhaps it was spinning while locking hands with a playmate, in a teacup at Disney World, dancing in pirouettes, or simply turning in place -- it was a thrill to send our surroundings into a kaleidoscopic blur. This was followed by a dizzy fit of giggles until our internal compasses caught up, and the world came back into focus. Do you remember?

Four years ago, a little girl named Jaka was spinning in circles with some other children.

Around and around, chin up, arms out, her face full of smiles. Tragically, when Jaka lost her balance, she plummeted into her aunt's cooking fire. Jaka landed in the burning coals on her left side with her arm up. The pot of boiling water her aunt had prepared for rice spilled over her shoulders, arms and back.

Fanta, Jaka's mother, took her to a local hospital in Conakry, Guinea in West Africa. In order to be seen by doctors, the hospital required a payment of 1.5 million Guinea Francs at the gate -- just over $200. Unable to afford the fee, they returned home. For the next eight months, Jaka laid on her stomach, tethered to the ground by unimaginable pain.

As Jaka's burns healed without medical care or rehabilitation, her left shoulder and arm contracted. Jaka's skin began to grow back in such a way that her arm became stuck to her side from her armpit to elbow. Fearing that Jaka would lose function of her arm, Fanta tried to treat the problem herself.

Fanta forced Jaka's arm away from her side three times, trying to prevent the contracture. Fanta described each attempt, saying that she and Jaka both cried themselves to exhaustion.

On the fourth try, Jaka begged her mother to stop because the pain was so unbearable. "If you try to pull it open again, I will die. The pain will kill me," Jaka told her. With that, Fanta allowed Jaka's arm to heal on its own, stuck to her side.

Recently, 9-year-old Jaka was a patient on the Africa Mercy hospital ship, where she recovered from a free plastic surgery that released her arm and grafted skin. Deep burn marks cover her head, neck, shoulders, back, and arms -- but no one noticed because they were entranced by the little girl's adorable gap-toothed smile.

Sweeping, washing, and fighting -- these are the activities Jaka said she would get to do with her restored arm. Laundry might not be appealing to many, but participating in household chores is a normalcy Jaka had never known. "When I go home, I will work all the time because I can," Jaka said. (Fanta admits she was glad for this enthusiasm). Free of her deformity, Jaka will also be able to go to school for the first time.

As for fighting, Jaka is one of ten children, and she happens to be very ticklish. With her arm free, she will be able to hold her own the next time she is picked on by one of her older brothers or sisters. She was ashamed to go among her siblings and friends when her arm was stuck to her side because they would tease her. "Now they will see me and say, 'Jaka has become well!'" Then, she says, they will invite her to sit with them and watch the cars go by their house.

But Jaka's favorite part about her restorative surgery and rehabilitation is even simpler than that: "Clapping." Now Jaka says she can finally clap with two hands.

Mercy Ships is a global charity that delivers free health care in developing nations using hospital ships. For 20 years, Mercy Ships and Johnson & Johnson have partnered to deliver product and educational support for surgical programs operated onboard the Africa Mercy so that burn victims like Jaka can play, go to school, and clap with both hands again.

PHOTO GALLERY
Jaka's Story on the Africa Mercy
Download
Calling all HuffPost superfans!
Sign up for membership to become a founding member and help shape HuffPost's next chapter
Join HuffPost 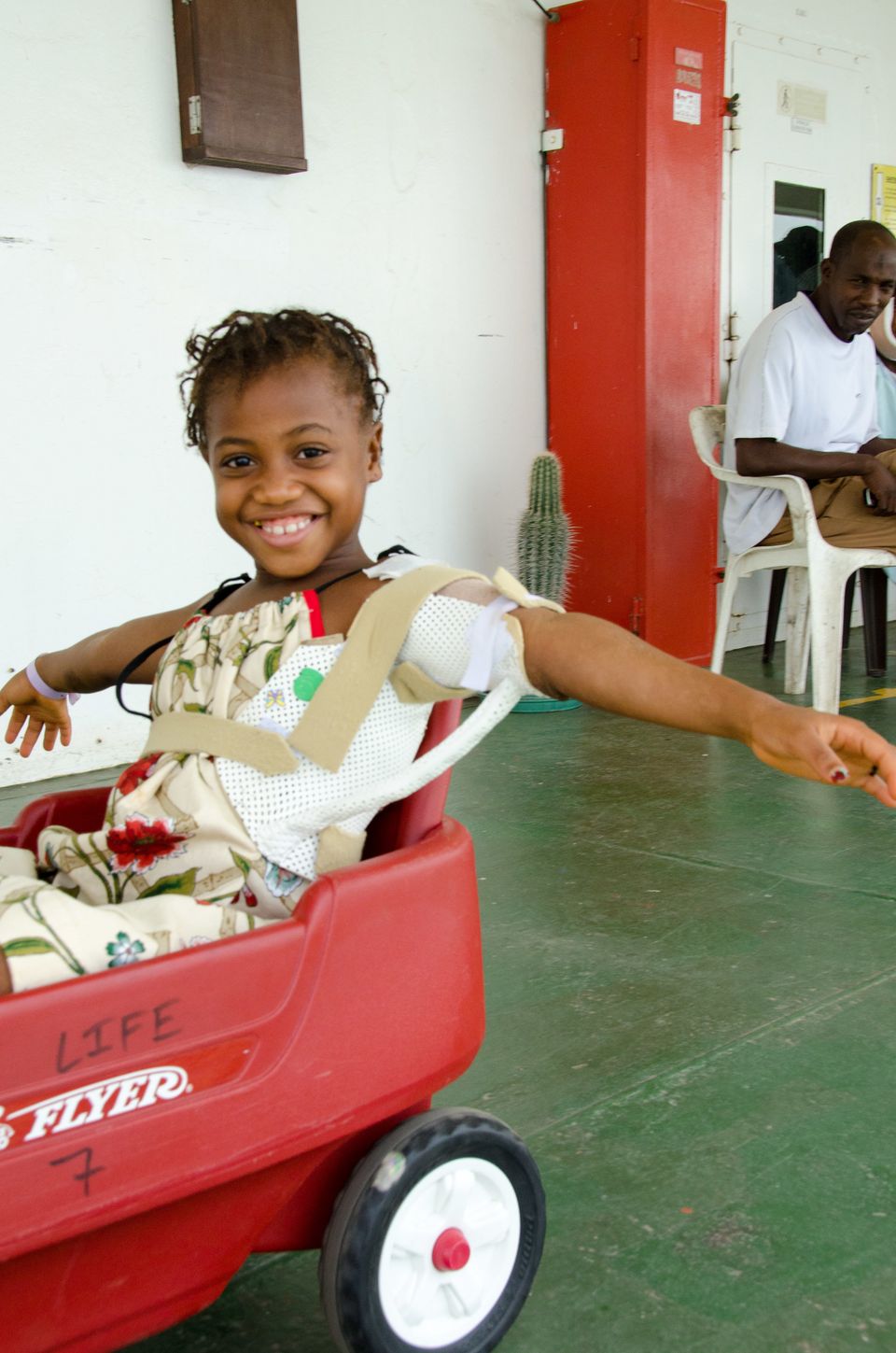