The Maya town of T'ho thrived for centuries as a cultural capital of the Yucatan Peninsula then Spanish conquistadores showed up in 1542, ripped the city down and built a new one for themselves on the spot. The bearded foreigners called it Merida after a city they admire and missed in Spain.

Time passed and the Maya started to drift back, at first to work in the fields, ranches and kitchens of sprawling haciendas and then, in the mid-1800s, in the booming henequen plantations. When the debut of synthetic fibers took the wind out of the henequen market in the early 1900s, many of the workers moved into town. 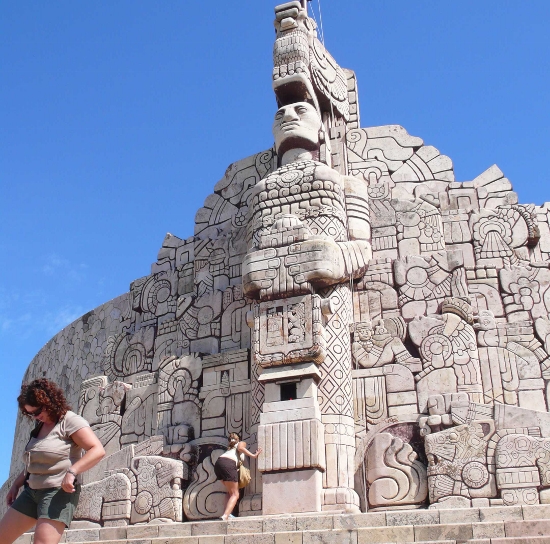 Tourists scamper around a monument in Merida.

Today, it's estimated that well over half of Merida's one million or so residents speak both Mayan and Spanish. The city also boasts a rich mix of Mayan and Spanish cultures and proximity to the large number of Maya communities that sit not far from the Cathedrals and hacienda's of the rebuilt Spanish city that boasts the second largest urban historic district in Mexico.

Not far out of town is the ruined Maya city of Uxmal. Here, the distinctive oval Temple of the Magician (according to legend it was built in a single night) looms over acres of other temples, government buildings, ballcourts and the like. Among the site's main structures are the Nunnery Quadrangle (actually an office building), the Palace of the Governor (known for its 320-foot-long mosaic facade) and the House of the Turtles (so named for the turtle carvings on its moldings). 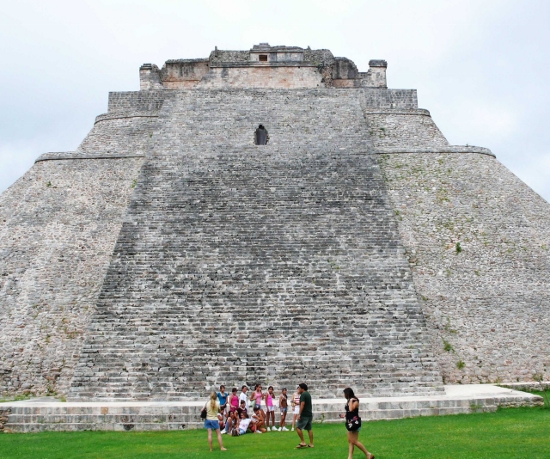 Temple of the Magician at Uxmal.


A newer attraction on the tour routes -- it's only 450 years old -- is a colonial town full of yellow buildings called Izamal. One of the country's 57 pueblos magicos (magic cities), Izamal features the Convent of San Antonia de Padua, a fortress-like structure with 75 arches on a hill covering what was once the big Mayan Temple of Popol-chac.

For a change of pace, still another tour goes to a 146,000-acre biosphere reserve when tens of thousands of pink flamingos can be seen munching away on shrimp-like crustaceans in the shallow offshore waters.

The tours usually get back to Merida in time for visitors to enjoy the city's traditional street festivals, during which crowds watch folkloric dancers on one block, strolling minstrels on another and salsa bands on the next. There are lots of food stands around the festivities selling Merida's classic lime soup, pipal pig (pulled pork in a tangy tomato sauce), stuffed cheese meringues and other tasty dishes. 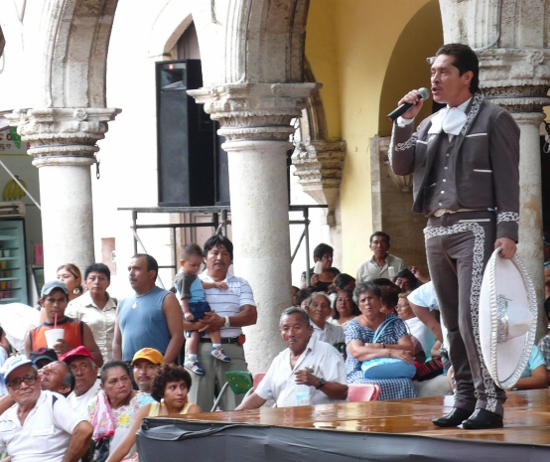 Entertainment at a street festival.

Everyone on the people-packed streets (vehicle traffic isn't allowed on certain nights) whoops it up together, locals and tourists alike, playing out a feast for the eyes and the palate that's been going on as long as anyone here can remember.

The Meridian stewpot still boils over with the flavor of its mixed heritage, but modern times have added new spices to the gumbo. For example, Volkswagens now mix with calesa horsedrawn carriages on the city's cobbled streets, youngsters dressed in hip-hop clothes sip coffee with friends in old-time Mayan garb, and shoppers can dicker for goods at streetcorner markets or shell out their pesos at super-stores like Costco, Sam's Club and Walmart.

Merida is also the jumping off spot for day-trips to the region's most famous archaeological site, Chichen Itza. The site typically hosts around 4,500 visitors a day, but the count recently swelled to as many as 50,000 on Dec. 21 for the celebration of the end of the Maya long-count calendar.