I was eleven years old when I first hopped a freight train. Didn't go far. Went about a hundred miles, and they arrested me in Fresno. I grew up beside the railroad track and the way to leave town was on a train. All we knew was that there was something out there that was intriguing about being on your own. And it was really calling to me at an early age. I had excuses -- I could say, well, my mother was left with me to raise -- but that wasn't the reason. It was just some inner yearning, that I didn't really understand then and probably can't explain now, caused me to jump those freights in search of something.

He'll tell you he's a country singer .... But to me the essence of rock and roll is a cry for freedom and rebellion. And I don't know anyone who embodies it better. Every aspect of his life is a refusal to submit. 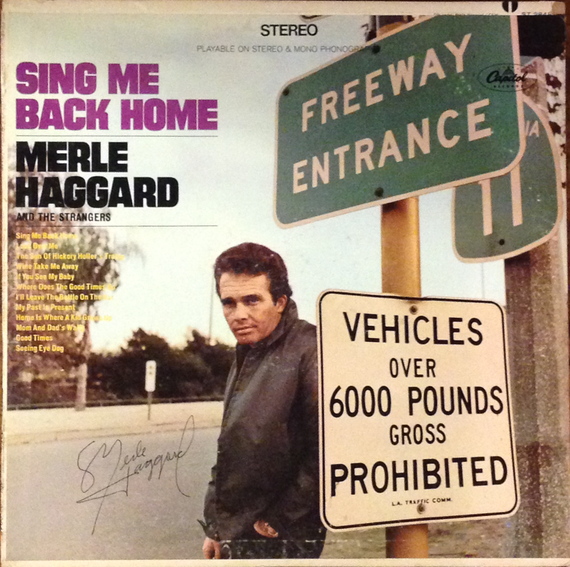 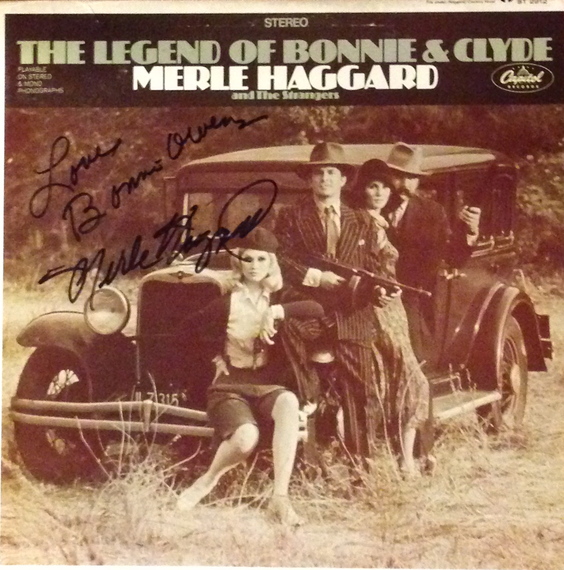 The Legend Of Bonnie & Clyde (1968) signed by Merle, Bonnie Owens 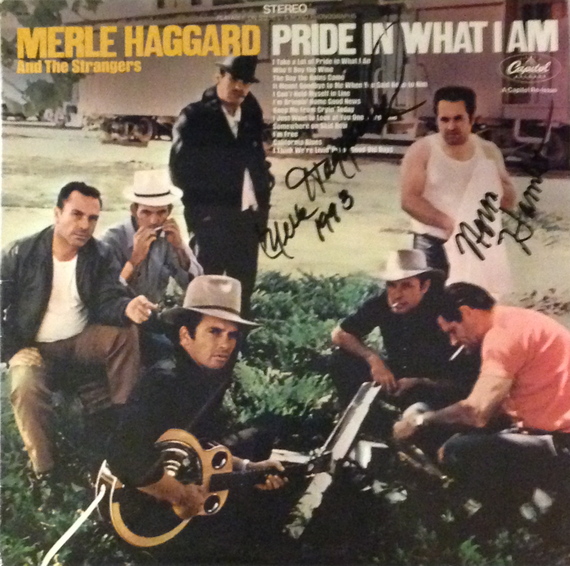 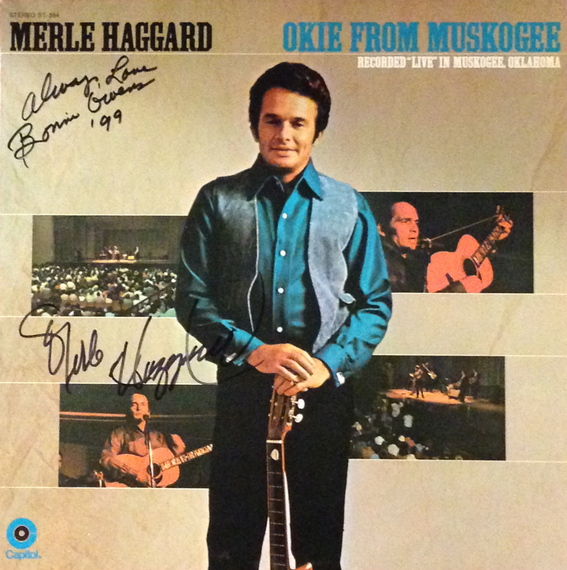 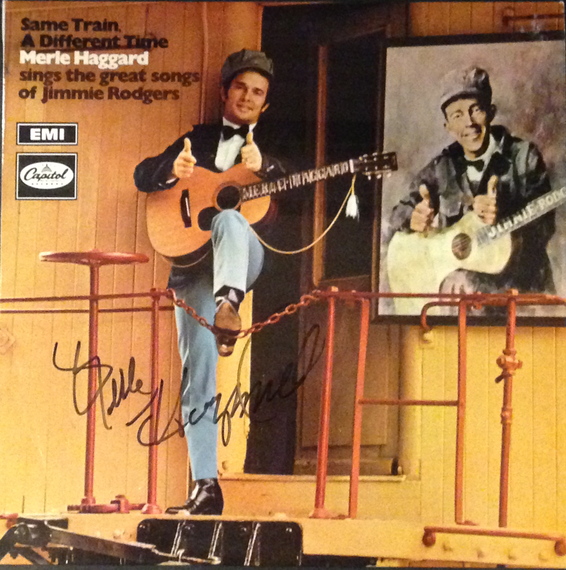 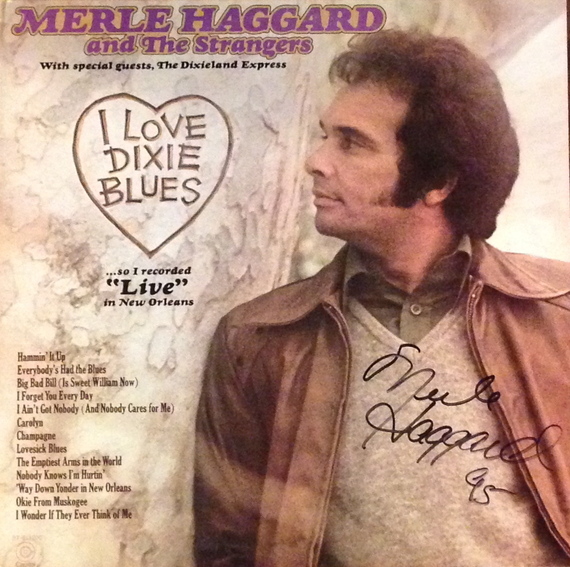 My second wife Bonnie Owens and I worked together after we divorced for a period of maybe 20 years. And I managed to stay friends with another wife. And then, there's one that I don't mess with. Everybody's got one of those.
Merle Haggard

Even though the crime was brutal and the guy was an incorrigible criminal, it's a feeling you never forget when you see someone you know make that last walk. They bring him through the yard, and there's a guard in front and a guard behind - that's how you know a death prisoner. They brought Rabbit out...taking him to see the Father,...prior to his execution. That was a strong picture that was left in my mind.
Merle Haggard

Though Johnny Cash sang in "Folsom Prison Blues" about how he "shot a man in Reno just to watch him die", Cash's prison experiences were limited to a couple of overnight stays for being drunk and disorderly and being caught smuggling amphetamines while returning from Mexico. Merle Haggard was the real deal. While imprisoned in San Quentin, Merle said, "I watched one man kill another over a simple insult...and sometimes when I lay in my bunk I could hear men crying out in pain from being raped by other inmates". That's raw and a little too real. As Cash once said to him, 'Merle, you're what people think I am.'"

Merle Haggard had thirty eight Number 1 country hits, forty Number 1 country albums and sold millions of records. As successful as his career is, it had very humble beginnings. His family was poor and emigrated to Bakersfield, California from the Oklahoma dust bowl during the Depression. There, they moved into a converted boxcar. In 1945, Merle's father died suddenly of a brain hemorrhage and Merle's mother became the primary bread winner to support her three children.

A rebel, Merle became a recalcitrant petty criminal and was sent to his first juvenile detention center in 1950. Never fully rehabilitated, Merle continued to hop freight trains, pass bad checks, get arrested for truancy, get re-arrested for escape from jail (by his count, he escaped from seventeen institutions), until Merle was arrested for assault and robbery which culminated in a fifteen year sentence and incarceration at San Quentin in 1958. It was a bad ten year skid and he was deemed "incorrigible." If this sounds like fodder for the later Merle Haggard masterpieces - "Mama Tried", "Branded Man", "The Running Kind" and "Sing Me Back Home" - it is.

A turning point for Merle was seeing Johnny Cash perform for the first time at San Quentin on January 1, 1959. Merle wasn't there on a research project, he was in the audience wearing his prison blues. Merle later said of Johnny Cash's appearance, "He chewed gum, looked arrogant and flipped the bird to the guards -- he did everything the prisoners wanted to do. He was a mean mother from the South who was there because he loved us. When he walked away, everyone in that place had become a Johnny Cash fan." Merle joined the prison band and dedicated his life to music. When he was released in 1960, he returned to Bakersfield chastened by his prison experiences and sought a career in music with a desperation that only the dying and humble can pursue.

Merle's songs are not abstract and elliptical. They are so personal and direct, they seem torn from the very marrow of his bones:

And I turned twenty-one in prison doing life without parole
No one could steer me right but Mama tried, Mama tried
Mama tried to raise me better, but her pleading I denied
That leaves only me to blame 'cause Mama tried

Dear old Daddy, rest his soul
Left my mom a heavy load
She tried so very hard to fill his shoes
Working hours without rest
Wanted me to have the best
She tried to raise me right but I refused

When they let me out of prison, I held my head up high,
determined I would rise above the shame.
But no matter where I travel, the black mark follows me,
I'm branded with a number on my name.
If I live to be a hundred, guess I'll never clear my name,
'cause everybody knows I've been in jail.

Merle's songs have been covered by everyone: from The Byrds to Bob Dylan, Emmylou Harris to Marianne Faithfull,The Grateful Dead to Dean Martin. "Sing Me Back Home" is possibly the most heart wrenching, a gospel hymn to a prisoner's last walk. And it happened almost exactly as Merle sings it. When Merle was in San Quentin, he plotted his escape with a fellow inmate, Jimmy "Rabbit" Hendricks. His fellow inmates talked Merle out of escaping, but Rabbit escaped and was caught, but not before shooting a police officer. Rabbit was returned to San Quentin and Rabbit was executed.

The most well known song Merle wrote - "Okie From Muskogee" - is possibly his least favorite. As he said, there are "about seventeen hundred ways to take that song." It is not a neo-conservative rant, rather, it is a staunch defense of freedom and an homage to his deceased Okie father. As Merle explained, "When I was in prison, I knew what it was like to have freedom taken away. Freedom is everything. During Vietnam, there were all kinds of protests. Here were these [servicemen] going over there and dying for a cause -- we don't even know what it was really all about. And here are these young kids, that were free, bitching about it. There's something wrong with that." Nevertheless, Merle did attract the (unwanted) interest of segregationist George Wallace and others who reached out to him as a kindred spirit. They were wrong about Merle's intentions and they were instantly rebuffed.

I hear people talkin' bad,
About the way we have to live here in this country,
Harpin' on the wars we fight,
An' gripin' 'bout the way things oughta be.
An' I don't mind 'em switchin' sides,
An' standin' up for things they believe in.
When they're runnin' down my country, man,
They're walkin' on the fightin' side of me.

I saw Merle perform many times over the years in small clubs (The Birchmere, Tramps) and concert halls (Town Hall). His band - The Strangers - were accomplished musicians, some of whom had been with him since the late 1960s. Pedal steel player Norm Hamlet was his music director (since 1967), Don Markham played trumpet and saxophone (since 1969) and Bonnie Owens, one of his ex-wives, was a back up singer for decades. When Merle traveled on tour, I would always stalk his tour bus, hoping to grab a couple signatures before or after a show. The tour bus was easy to find, there's really no place to hide on the streets of Manhattan. Invariably, there would be two buses, one for the band and one for Merle. So I would have to suss it out, but with persistence I got Norm Hamlet and Bonnie Owens' signatures, and Merle.

I was struck by how shy and slight Merle was. On stage he was a commanding presence, off stage he seemed reserved and guarded. Merle was particularly interested in the cover of Pride In What I Am. His fellow Telecaster maestro, Roy Nichols, Norm Hamlet and a bunch of his band mates were gathered around a fire in a desolate rail yard near a box car. This is the "hobo jungle" where Merle learned "things they never taught (him) in a classroom." And Merle loved the Jimmie Rodgers tribute album cover, "The singing brakeman was a big influence", he allowed.

Merle Haggard, an incredible journey from prison to recovery, redemption and Country Music dominance. A rich and powerful legacy of songs and performances will endure.
Thanks, Merle.

"Lonesome Fugitive" and "Sing Me Back Home" - Live 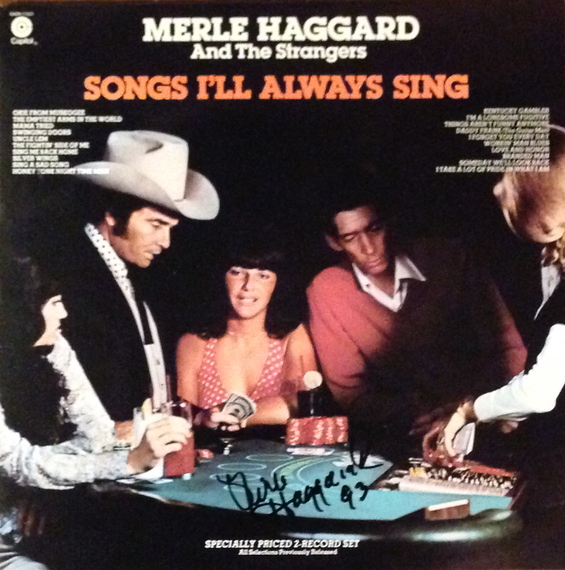 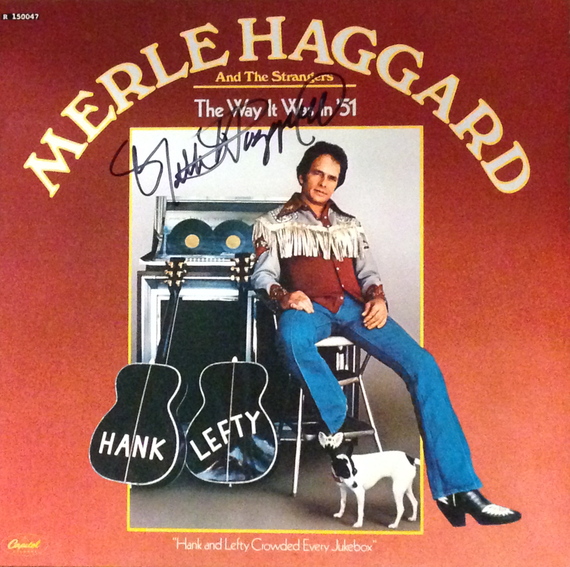 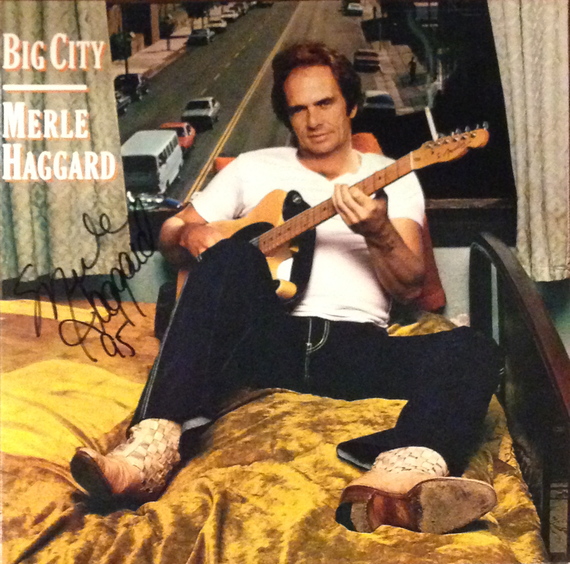 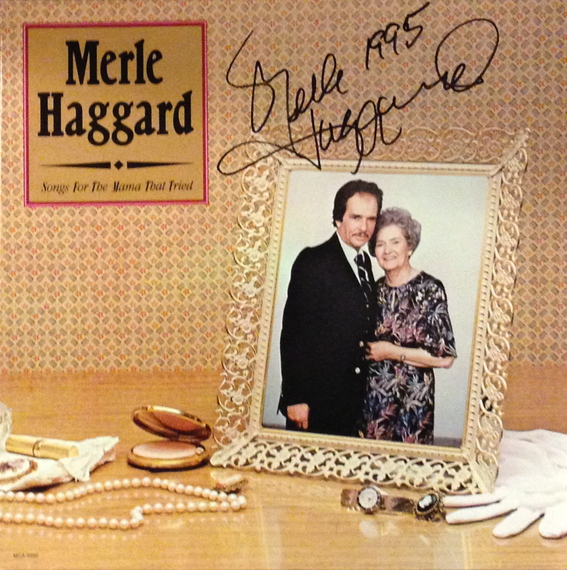 Songs For The Mama Who Tried (1981) signed by Merle 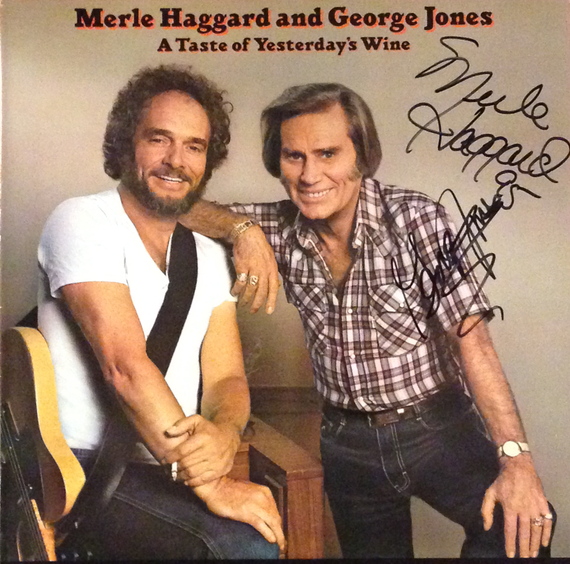 A Taste Of Yesterday's Wine (1982) signed by Merle, George Jones 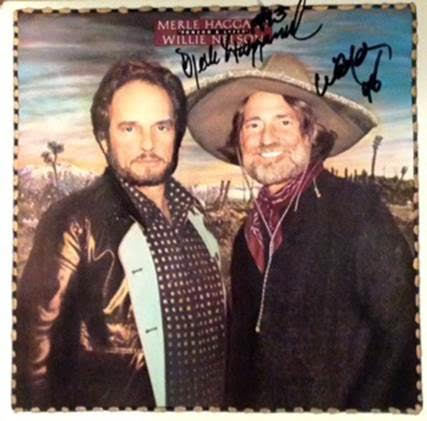 all signed albums from my collection