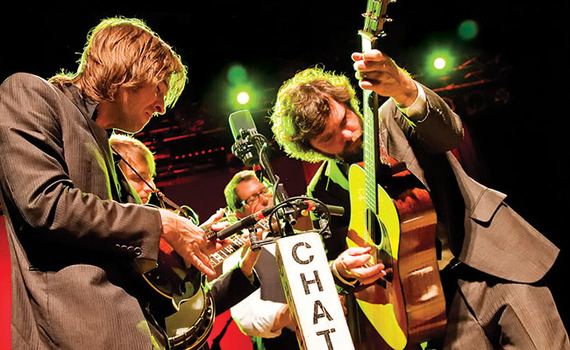 The good folks at MerleFest, which is slated for April 27-30, 2017, have announced the initial lineup for the festival's 30th anniversary celebration and I am happy to say it's full of the usual suspects: Jim Lauderdale, Jerry Douglas, Sam Bush, Del McCoury and Peter Rowan. No surprise there as most of these musicians have been involved in the festival since its inception.

I am particularly excited to see Mountain Heart, Front Country, Chatham County Line, Scythian and Swift Creek in the lineup.

Josh Shilling, Mountain Heart's frontman, is also excited about returning to MerleFest. "We've played the festival a few times, but I'm super excited for everyone to see the band's new configuration," he says. "The members of Mountain Heart have literally been going to MerleFest since we were old enough to walk. To be returning again to the Watson Stage not only as fans, but as performers, means the world to us. MerleFest is one of the top festivals in the world to experience. The location is gorgeous, the staff is second to none and the lineup of bands and activities are simply unbelievable!"

From the release: "2017 will be a celebration of 30 years of MerleFest! The annual homecoming of musicians and music fans returns to the campus of Wilkes Community College in Wilkesboro, North Carolina, in the foothills of the Blue Ridge Mountains. The star-packed lineup for MerleFest 2017 will be announced over the next few months; today MerleFest made its first announcement for the 2017 lineup, including Zac Brown Band with a very special acoustic set, Del McCoury Band, Jim Lauderdale, Sam Bush, Jerry Douglas, Peter Rowan, Mountain Heart and many more."

Zac Brown Band - Three-time GRAMMY winner and multi-platinum artist Zac Brown Band is one of music's most heralded acts. The band's latest platinum-certified album marks its fourth consecutive No. 1 debut on the Billboard 200 chart. With three platinum-selling albums, "Uncaged," "You Get What You Give," "JEKYLL + HYDE" and five-time platinum "The Foundation," along with its 2013 project "The Grohl Sessions Vol. 1," the band has sold over 25 million singles and eight million albums to date. Zac Brown Band has earned a historic series of 15 No. 1 hit radio singles and is only the second artist to top both the country and active rock formats. Zac Brown Band will close out the festival on Sunday.

Del McCoury Band - For over 50 years, Del McCoury's music has been the standard of authenticity in bluegrass and American roots music. He has held the banner high as one of the best in bluegrass, but he has also pushed the music in new directions, recording with New Orleans' famed Preservation Hall Jazz Band, sharing the stage with Phish, performing on late night television for David Letterman and Conan O'Brien, and even receiving the National Heritage Fellowship, our nation's highest honor for a traditional artist. Today, Del McCoury Band shows no signs of slowing down, evidenced by recording new music and keeping an active schedule of touring. Del McCoury Band will perform on Thursday of the festival.

Jim Lauderdale - Two-time Grammy-winning singer and master songwriter Jim Lauderdale is both a "songwriter's songwriter," who has written/co-written many modern classics for iconic artists, as well as an intuitive sideman who has enhanced the music of a bevy of esteemed musicians. As a solo artist, since 1986 to present, he has created a body of work spanning 28 albums of imaginative roots music, encompassing country, bluegrass, soul, R&B and rock. Jim will perform on Friday, Saturday and Sunday.

Sam Bush Band - The Father of Newgrass, Sam Bush established himself long ago as roots royalty, revered for both his solo and sideman work, which includes time with Emmylou Harris, Lyle Lovett and many others. Now, instead of kicking back and soaking up honors such as an Americana Music Association Lifetime Achievement Award and his suite of Grammys and International Bluegrass Music Association trophies, Bush still strives relentlessly to create something new, culminating in his recent album, "Storyman," for Sugar Hill Records. Sam Bush Band will perform on Friday and Saturday.

Peter Rowan - Grammy-award winner, six-time Grammy nominee and 2015 IBMA award winner for Recorded Event of the Year, Peter Rowan is a singer-songwriter with a career spanning over five decades. From his early years playing under the tutelage of bluegrass veteran Bill Monroe to his time in Old & In the Way to his breakout as a solo musician and bandleader, Rowan has built a devoted, international fan base through a solid stream of records, collaborative projects and constant touring. Peter Rowan will perform on Friday, Saturday and Sunday.

Mountain Heart - Mountain Heart has been fearlessly revolutionizing the way acoustic music can be presented and played. The band's name has been synonymous with cutting-edge excellence in acoustic music circles since the group's creation. Widely known throughout the music industry for continually redefining the boundaries of acoustic music, the band has gained legions of loyal fans both as a result of its superlative musicianship and just as notably, its incendiary live performances. Mountain Heart will take the stage on Thursday.

MerleFest is proud to announce more than 75 artists who are part of the festival's 2017 lineup. The initial lineup reflects the diversity and quality of performers who are the hallmark of the festival. MerleFest is known for its unique mix of traditional, roots-oriented music from the Appalachian region, including bluegrass and old-time music, Americana, blues, country, Celtic, Cajun, cowboy, zydeco, rock and many other styles that the late Doc Watson referred to as "traditional plus."

Additional performers for MerleFest 2017 will be announced in the coming months. The lineup is viewable at MerleFest.org/lineup.

"Throughout the years, one of the major factors that has built and sustained MerleFest," said festival director Ted Hagaman, "is the quality of the artists and performances our guests see over the four days of the festival. People truly feel the festival is a great value. That's probably best expressed by the fact that so many music fans and families return year after year, making MerleFest an annual homecoming every spring. We're tremendously proud of what we've collectively built over the past 30 years and look forward to celebrating this milestone April 27-30, 2017."

For Steve Johnson, artist relations manager for MerleFest, much of the thrill of booking the festival comes from discovering new artists. "Working for MerleFest means I get to do a lot of traveling around the U.S. and Canada to various festivals and music venues," Johnson said. "This year at MerleFest, we have some great artists I got to know in various ways, like I Draw Slow, a band from Dublin, Ireland; I met the band members while working with them on one of their first U.S. tours. Megan Nash is an artist I first heard at a music event in the town of Nokomis, Saskatchewan, in Canada. I was immediately impressed by her songwriting and vocal style. 10 String Symphony is a duo that I knew of from fiddler Christian Sedelmyer's work with Jerry Douglas at MerleFest 2016. I then heard them perform in Nashville, Tennessee, and knew right away the MerleFest audience would enjoy their music!"

Tickets for MerleFest 2017 are on sale now and may be purchased at MerleFest.org or by calling 1-800-343-7857. A three-tiered pricing structure is again offered for MerleFest 2017. Early Bird Tier 1 ticket discount is available starting November 17, 2016, through February 12, 2017. Early Bird Tier 2 ticket discount will run from February 13, 2017, through April 27, 2017. The third price tier will be gate pricing. Fans are encouraged to take advantage of the extended early bird discount.

MerleFest, considered one of the premier music festivals in the country, is an annual homecoming of musicians and music fans held on the campus of Wilkes Community College in Wilkesboro, North Carolina. MerleFest was founded in 1988 in memory of renowned guitarist Eddy Merle Watson, the son of the late American music legend Doc Watson. MerleFest is a celebration of "traditional plus" music, a unique mix of music based on the traditional, roots-oriented sounds of the Appalachian region, including bluegrass and old-time music and expanded to include Americana, country, blues, rock and many other styles. The festival hosts a diverse mix of artists on its 13 stages during the course of the four-day event. The annual event has become the primary fundraiser for the WCC Foundation, funding scholarships, capital projects and other educational needs.