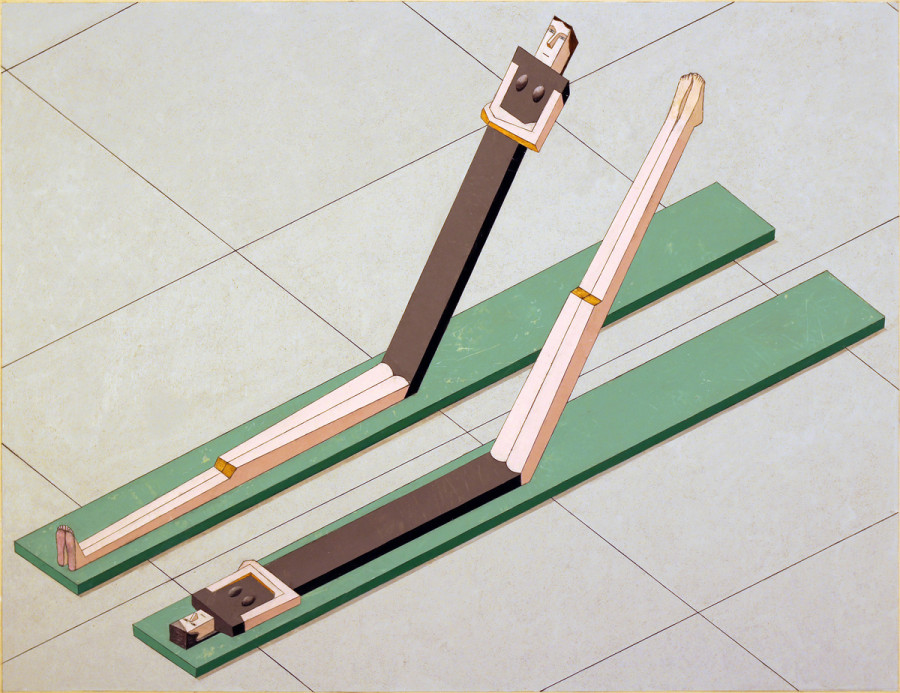 Reading Tolstoy in bed. Exercising on a sea foam green mat. Enjoying pizza and beer with old friends. These are the humdrum subjects crystallized in Mernet Larsen's paintings. Through Larsen's gaze, the everyday happenings stretch and warp into uncanny structures you vaguely recognize but can't quite pinpoint. Staring at a painting feels like dreaming about an old friend, yet envisioning him with an altogether different face.

Mernet Larsen, at 75 years old, has only recently begun to show her work outside her home state of Florida. The artist has been painting avidly since the 1960s, and has served as an art professor at the University of South Florida since 1967. In 2012, Roberta Smith reviewed her exhibition at Vogt Gallery in New York, contending "her efforts are extremely viable participants in an extensive, possibly global conversation about how to portray modern, three-dimensional life on two-dimensional surfaces."

Larsen's upcoming solo exhibition "Chainsawer, Bicyclist, and Reading in Bed," is her first in Los Angeles. And it's the artist's first time in the city as well. 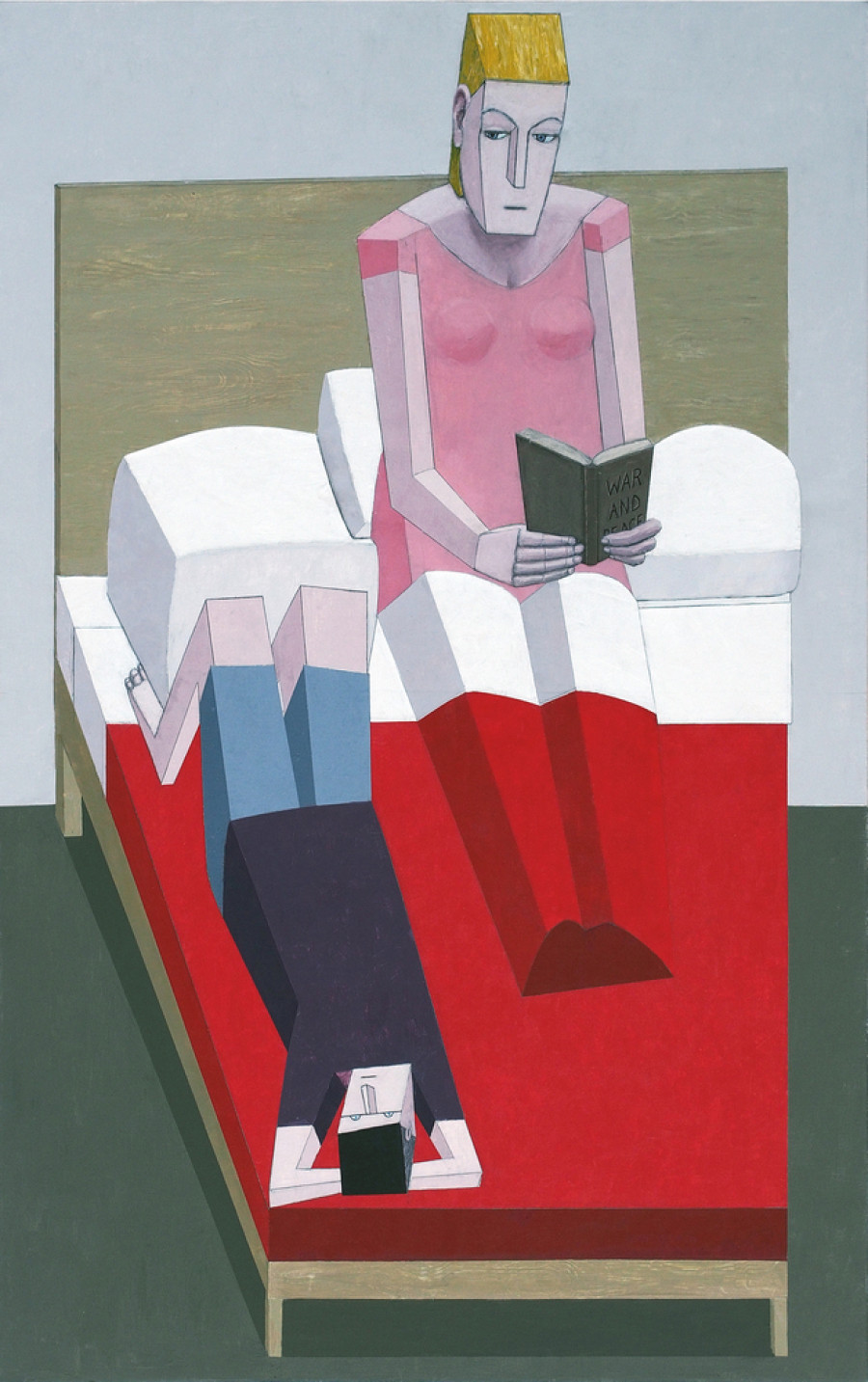 When Larsen was first entering the art world, abstraction, concept and form reigned supreme. As artists like Peter Saul have attested, the 1960s were not kind to artists interested in content -- everything was form. "I was kind of discouraged about art because, at that point in time, art was very much abstract expressionism, period," Larsen explained to The Huffington Post. "Very academic, very intellectual, like Joseph Albers."

The deciding moment came one day in 1960 when Larsen, disillusioned by the breach between art and life, was determined to give art school one last try. Sketchbook in hand, she embarked on a walk, taking a professor's advice to draw what she saw. After feeling increasingly discouraged, she stumbled upon a pack of cows, in her words, "bright red cows on yellow ground." She started drawing "like crazy," and the drawings eventually turned into paintings.

"They were pivotal paintings for me," she explained. "All the paintings I've done since are kind of like those cows." 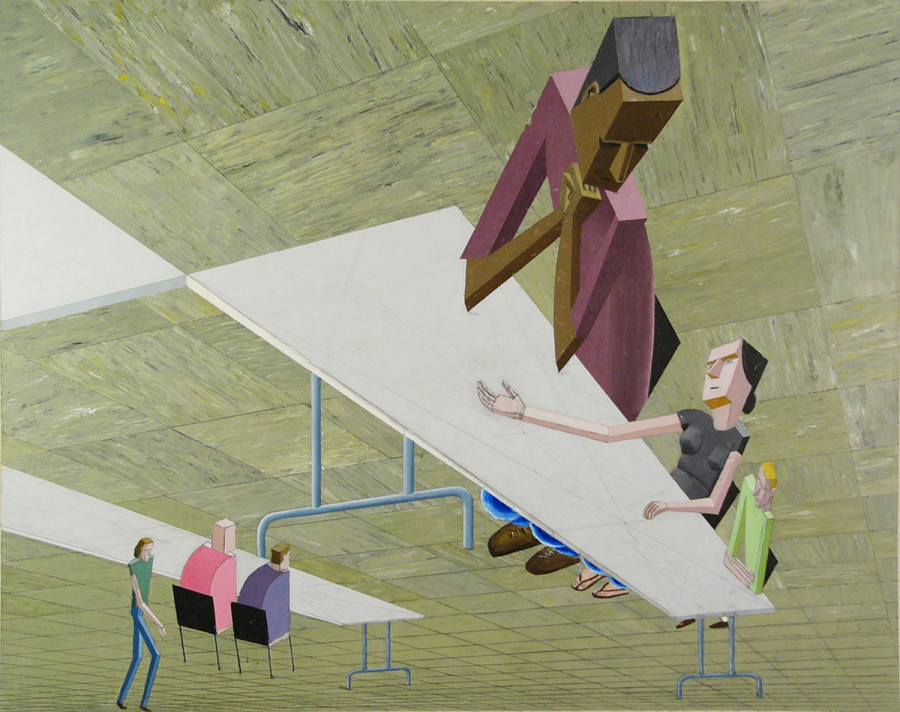 The cows illuminated a principle that would carry Larsen throughout her artistic career. "What you see determines how you see it, that has pretty much governed my whole life. The content determines the form. The way I saw cows, for example, was really different from how I saw a sofa in my living room at home. So I started concentrating on one item at a time and thinking -- how will this make me work? I did my sisters jumping in the living room, dancing to the music. I did aquariums, I did the insides of cars. Everything that I did and focused on gave me a different way of working. I had to accommodate my way of working to those things. More or less, that's still true of the way I work now."

Although form's dominion over content is no longer as prevalent today, Larsen attributes many contemporary artists' vocations to that former aesthetic climate. "I feel like a lot of us who are now in our 60s and 70s were trained in an atmosphere of formalism and abstraction, and all that was a springboard for what we did. That seems like the mantra of my generation, moving from abstraction toward figuration. It was in the air, so we all felt it."

In particular, Larsen creates alternate realities in which geometric structures resembling human beings stretched and calcified. The totem-like specimens engage in everyday activities like you and I, though the everyday laws of physics and gravity don't seem to apply. Her wonky perspectives leave the viewer thoroughly enmeshed in the banal yet intimate scenes, whether hovering above a precarious chainsaw or awkwardly close to a leg stretching regimen. 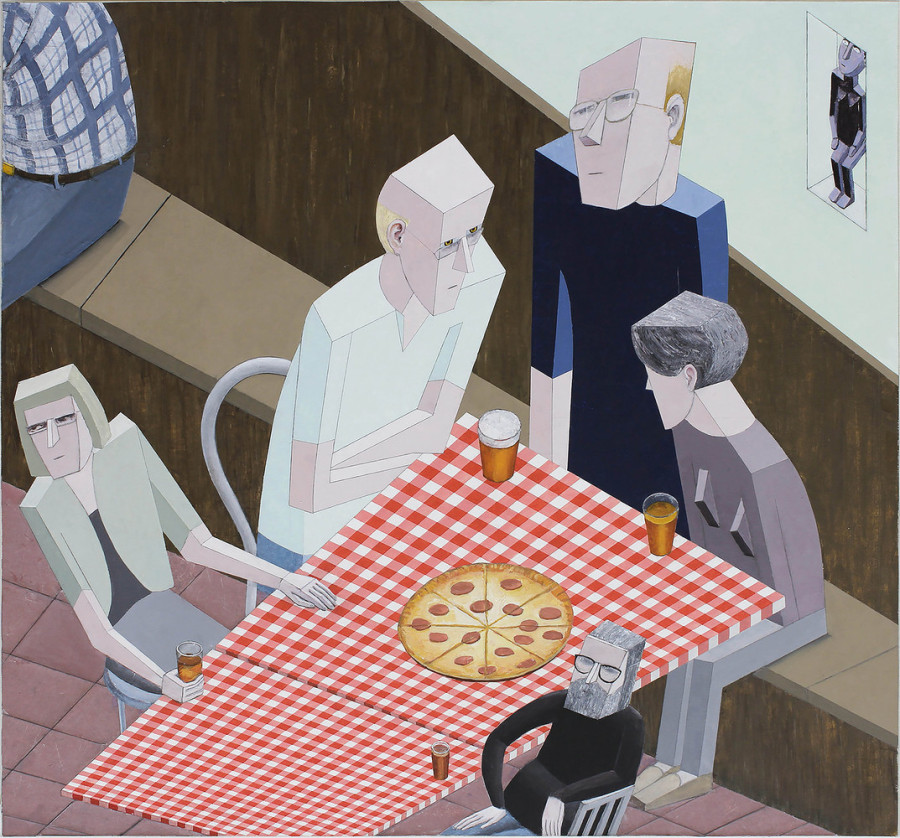 Larsen refers to her depictions as "analogs" rather than "representations," seeing as they are constructed in the mind, not observed with the eye. "I think the idea sort of started with Roland Barthes and some things that he wrote about Japanese art," said Larsen. "The idea is that in Japanese theater, the puppets weren't little imitations of people, they were actually something that ran parallel to people. They weren't little fetishes of people. There were other kinds of structures that were performed like people but in analogous ways, rather than imitative ways."

Because of the geometric semblance of Larsen's pictorial world, it's often associated with the alienation and digital dependence of contemporary life. While Larsen doesn't object to this reading, it was never her intention. "People often look at the works and say, "Oh, these look like computer generated images." But if you look at them, they have no system like that. There's no adherence to anatomy. The structures give you enough clues to think they're conventional figures, but when you look at them, they're not. They're just structures. They're structures that work in an analogous way to people and situations you recognize, but they get at some more essential quality and they also defamiliarize with conventions. You are able to see them in a fresh way, hopefully."

"A lot of people look at my paintings and see alienation because of the geometry, but I always see them as somewhat humorous and somewhat warm, in a very quietly warm way. I'm not about trying to convey alienation. I'm just trying to say here it is. This is the way it is. It's sort of strange, let's stop and think about it. It's sort of funny but it's not moving and emotional or alienatingly horrible or something. It just sort of is." 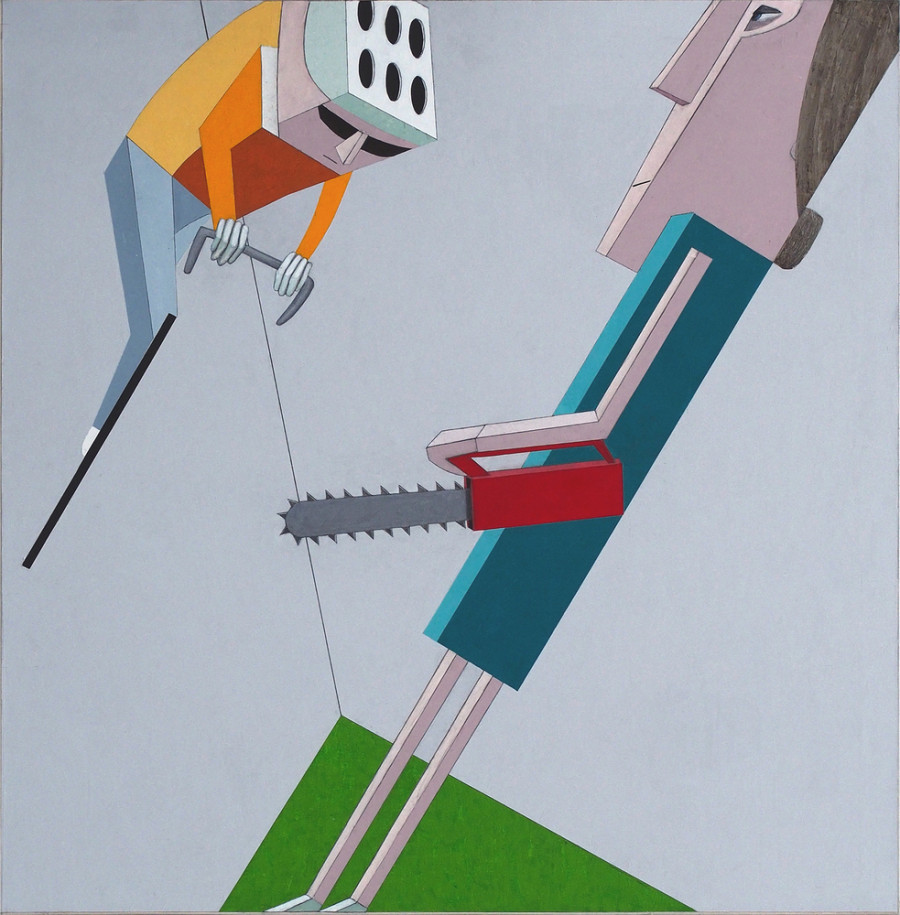 In a statement for Various Small Fires, Larsen explained her series of recent works being "as if I were leaving this life and had to take with me only a very few concrete images: this is what it was, not good, not bad, just what stood out. Not ephemeral, not photo or film-like, but memory turned into object, monumentalized."

When asked, Larsen explained the works aren't reactions against photography in itself, but to the way photography is experienced by the viewer. "I feel like photographs, no matter how I use them, put you in the spectator position. You're always observing things from the outside. And I wanted you to be in a situation, where you were more involved in it. So, what I use are these perspectival ploys -- diverse perspective, parallel perspective. Like Martin Ramirez, whose work I love. You're always sort of moving around inside the painting; you can never quite figure out where you're standing, so you kind of absorb it. Matisse does that too for me too. And a lot of Japanese art, from the 12th century particularly. They bring you inside and outside the space, you have no particular position. You can't quite get your bearings. And yet, I want you to have a sense of orient, a sense of mass, a sense of depth."

In essence, Larsen's paintings let you have your aesthetic cake and eat it too. The canvases capture origami worlds where remarkably familiar details like linoleum flooring, red checkered tablecloths, and unflattering eyeglasses are coupled with bizarre intrusions -- breasts like sideways pyramids, legs that stretch on for days, ears fastened to floating cubes for no apparent reason. What Larsen creates is an alternate reality, assembled, styled and governed on nothing but its own terms.