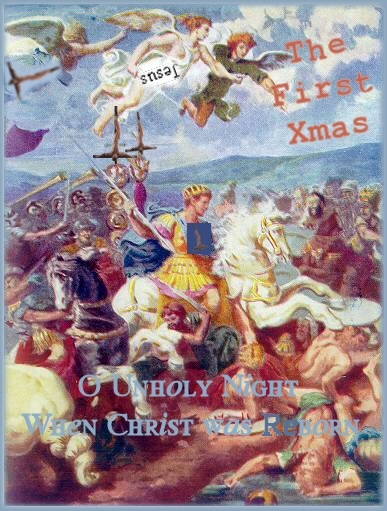 The Xians who should celebrate the rebirth of the one they worship on this date are the people I identify in my latest book, Grand Theft Jesus: The Hijacking of Religion in America, as Jesus Thieves. They have kidnapped Jesus, committed identity theft against him, and remade him into an advocate of the opposite of everything for which he stood.

Both an appropriate name for these pseudo-Christians and the idea that they should celebrate on this date came to me during a dinner conversation in Istanbul. The discussion was about the people who have hijacked the name of Christianity, those who call themselves "Christians" while disregarding everything Jesus taught, and about their counterparts in Islam.

While we were discussing Christian and Islamic "fundamentalists" during our dinner conversation in the city founded by Constantine, the most fitting name for those who shout the name "Jesus!" while standing Jesus on his head, those who have taken the holy name of "Christian" and turned into a vulgarity, came to me. In altering the message of Jesus, they follow a long tradition that dates back to some of the early Christians. But the most important hijacking of Jesus took place almost 1700 years ago and the person who had the greatest impact in overturning the teachings of Jesus was the Emperor Constantine, the man who renamed the city now called Istanbul Constantinople and who renamed what was actually Xianity Christianity.

"Born-again Christian" is a self-designation with which most of us have become familiar, but what many of those who so classify themselves actually worship is a born-again Christ. Many men might be called upon to provide DNA samples for a paternity suit involving the imposter presented as the re-born Jesus, but Constantine would be the one most likely to be determined to be the father.

Although the practitioners of ChristianityLite claim to celebrate the birth of Christ, they plainly do not like the first-born Jesus and prefer a born-again Jesus. They should, accordingly, stop commemorating his birth on December 25th and instead celebrate his rebirth, the most appropriate date for which is October 27th.

On the night of this date in AD 312, the eve of the pivotal Battle of Milvian Bridge, Constantine is said to have seen a vision of a cross with the Greek letters Chi and Rho, the first two letters of Christos, on it and to have seen or heard "In this sign you shall conquer." (That Chi looks like the letter X is fittingly symbolic of what Constantine was doing to Jesus.) The Chi-Rho symbol was put on the shields of Constantine's soldiers (most of whom were pagans), and they won the battle. The grateful conqueror first tolerated and then favored Christians, finally converting on his deathbed.

By the end of the fourth century, a century in which Christianity gained an empire and lost its soul, Christians had been transformed from the persecuted to the persecutors.

Constantine gave Jesus the fourth century equivalent of a shot of anabolic steroids and transformed the Prince of Peace into the Prince of War and ally of the rich and the ruler. Constantine's "Jesus" is the one that has been accepted by large numbers of people calling themselves Christians for the last seventeen centuries.

Constantine made no attempt to get on God's side; instead, like such twenty-first century national leaders as Mahmoud Ahmadinejad and George W. Bush, he thought that God was on his side. He identified his own goals as those of God. So do millions of people who call themselves "Christians" today.

These thieves who have stolen Jesus should stop claiming to be Christians and call themselves what they really are: Constantinians. They should celebrate the origins of their faith on October 27th--a holiday that can properly be designated as Xmas for X-ing out Jesus--by singing:

Rise from your knees. O hear the demons' voices.