South Korea is grappling with an outbreak of Middle East Respiratory Syndrome that has killed two and infected 30 people in total. In the same virus family as the common cold and SARS, the illness is a highly lethal respiratory disease that can also cause pneumonia and kidney failure before death. South Korea's Patient Zero is a businessman who had just traveled through Saudi Arabia, a country that has seen over 1,000 cases of the disease since it was first discovered back in 2012.

Little is known about MERS, but in a review paper published Wednesday in the medical journal The Lancet, researchers Stanley Perlman of the University of Iowa and Alimuddin Zumla of University College London gathered all the published research on the mysterious disease to explain how it works and set priorities for future research. Here are some of the most important points for people in the U.S. who are concerned about the virus to know:

The first known MERS patient died of severe respiratory illness in 2012 in Jeddah. Since then, the World Health Organization has tallied 1,149 lab-confirmed MERS cases, with a 38 percent mortality rate as of May 31, 2015. Most of the cases are concentrated in Saudi Arabia, but some patients in far-flung parts of the world have also contracted the virus after coming into contact with another infected person. 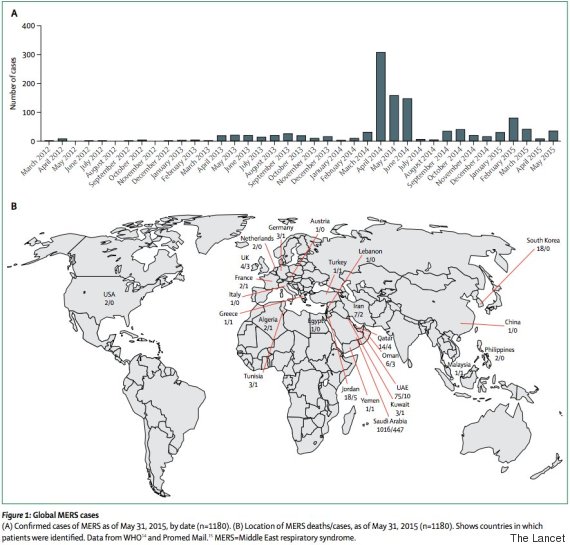 Researchers found antibodies to the MERS virus in some species of bats, as well as in the blood samples of camels from parts of Africa and Saudi Arabia from as early as 1992 and 1993, respectively. This leads scientists to believe that the virus has been circulating widely among the camel population for many years before the first recognized human patient contracted the virus in 2012.

No one knows exactly how MERS spreads

So far, scientists have figured out that the virus can spread from camels to humans via contact with the animal’s bodily fluids, like saliva, urine, feces and unpasteurized camel's milk, a traditional drink in Saudi Arabia. And in the case of human-to-human transmission, the virus spreads through close contact with a sick person’s body fluids, like large respiratory droplets. However, researchers haven’t excluded the possibility that MERS may be transmitted in the air, or through objects, like touching something that a sick person had previously touched.

MERS is part of a species of viruses called coronaviruses, including SARS (Severe Acute Respiratory Syndrome) and the common cold. Coronaviruses have high rates of mutation and a tendency to cross into new host species, according to the Lancet study. While this is concerning, especially considering how deadly MERS and SARS can be, MERS transmission isn’t efficient enough to have “pandemic potential,” Perlman and Zumla concluded.

For health care workers treating MERS patients, multiple recommendations from the Centers for Disease Control and Prevention, U.K. health authorities and the Saudi Ministry of Health advise wearing everything from a surgical mask, gown, gloves and eye protection to face masks and a respirator with a disposable filter for the face. MERS patients should also be kept in rooms that have a ventilation system that prevents room-to-room contamination.

Those who come into contact with camels often, such as farmers, slaughterhouse workers, vets or camel racers, should always practice good hygiene and wash their hands frequently, as even a camel who isn’t sick could still be shedding the virus through its body fluids. People who enjoy drinking camel milk should only drink pasteurized products, because the virus is stable in milk for a period of time.

The virus can incubate in a body from 5 days to two weeks before producing symptoms. It generally takes about four days for a person with symptoms to be admitted to a hospital, and about 11.5 days between onset of symptoms and death, according to two 2012 studies of the very first MERS clusters in Jordan and Saudi Arabia.

People who already have diabetes, cardiac disease, lung disease or some kind of immune disorder are at greater risk of developing severe MERS symptoms, while those who are generally healthy are more likely to have mild symptoms -- or none at all -- from the virus. In the beginning, symptoms start with fever, chills, and diarrhea, and can progress to pneumonia and organ failure.

Finding a treatment for MERS has been a challenge

There is no specific medication for MERS yet, but doctors have successfully brought people back to health with supportive care, which is when nurses and doctors try to relieve the symptoms caused by the virus. Knowledge about MERS is limited because there have been relatively few cases since the virus was first identified in 2012. Additionally, cultural issues prevent research from going forward, write the authors.

“Unfortunately, no tissue samples are available, largely for cultural and religious reasons, so that much of our understanding of [disease development] comes from studies of experimentally infected animals,” they write in the paper.

The authors note, however, that a handful of studies suggest that antibodies from the blood of people who have recovered from MERS might help treat patients.

MERS is not a threat to the U.S.

The review study didn't address possible spread to North America, but Perlman doesn't think that MERS is a credible threat to U.S. residents at home.

"MERS could spread in the U.S.A. if the proper precautionary and isolation procedures are not followed, mostly in health care settings," Perlman told HuffPost. "However, it is not a major threat that Americans should be concerned [about], largely because the virus is not very contagious -- notwithstanding the Korean outbreak."

The CDC also states that the virus presents “a very low risk” to Americans. Still, because global travel brings risk, the CDC is preparing for a potential MERS outbreak by providing information about symptoms to airport staffers, U.S. Customs and Border Protection agents, and international travelers. Of the more than 500 people in the U.S. who have been tested for MERS, only two have ever tested positive. Both cases, while unrelated, involved health care workers who lived and worked in Saudi Arabia and had traveled to the U.S. in May 2014.

The first patient traveled in a plane that had stopped in London before landing in Chicago. The patient then took a bus to Indiana. During the entire journey, the traveler felt unwell and had a low-grade fever. As the symptoms worsened, the traveler went to the emergency room of an Indiana hospital, where they were diagnosed with MERS and received treatment. Throughout the progress of the disease, no one else had contracted MERS from the traveler.

The second patient flew into Florida after stopping in London, Boston and Atlanta. During the journey, the patient began experiencing symptoms like fever, chills and a cough, and about a week after landing in Orlando was admitted to a hospital. The patient tested positive for MERS and got treatment, and like the case in Indiana, didn’t infect anyone else with the disease.

Stay abreast of our coverage for more information on the current MERS outbreak in South Korea.