Many people have weight loss as one of their key resolutions. Sadly, 35 percent of people also give up on that goal before the month even ends. It's not necessarily lack of time or willpower that causes you to struggle with weight loss year after year. The real reason that you may have struggled to lose weight is insulin resistance, or a condition I call metabolism dysfunction.

So you may be thinking, "Why is it so hard for me to lose weight?" I'm doing "everything right," and yet still weight loss is difficult. Perhaps (like many of my patients) you're already following a strict diet and working out several times a week, but to no avail. The weight still won't come off -- or, worse, you are gaining weight for seemingly no reason at all! You have become resigned to being overweight.

Weight problems aren't a permanent and immovable fixture for the rest of your life. If you're finding that weight is easy to gain and hard to lose, it's not your fault! Weight problems aren't just about overeating or under exercising -- they're about metabolic changes (The MD Factor Diet, 2015) that are collectively known as insulin resistance. Lab tests conducted in my practice have confirmed that over 89 percent of my patients have this real and often undiagnosed issue. So the good news is that the right combination of diet, exercise, and will to succeed you can reverse your MD factor and finally find success in losing weight and keeping it off for good.

In a nutshell, insulin resistance is the inability of your body to properly convert the food that you eat into energy to fuel your cells. People with the MD Factor have difficulty regulating their blood sugar, which is often due to insulin resistance or even diabetes. In both instances, their bodies are unable to pull glucose into the cells, which means that excess levels of glucose build up in the blood. With nowhere else to go, the body turns this extra energy into fat and stores it for later.

This infographic outlines the symptoms and causes of insulin resistance, or metabolism dysfunction. 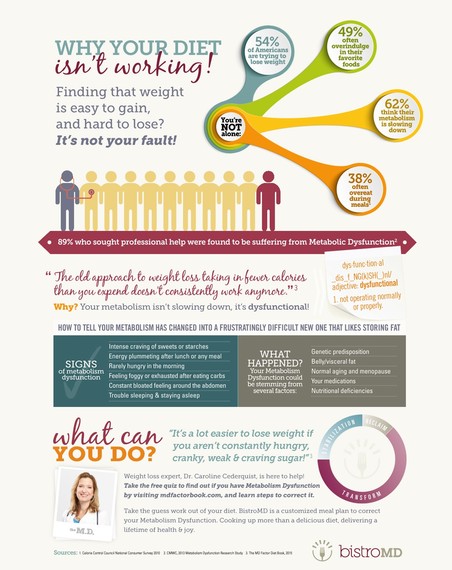 Surprisingly, you don't have to be overweight for your cells to be insulin-resistant. Even if your weight is perfectly normal, you can still suffer from its effects. Metabolism dysfunction doesn't develop overnight and could be caused by one or more triggers including: aging and menopause, genetics, belly/visceral fat, medications, and nutritional deficiencies. We'll cover all these in subsequent posts. But for now, we'll cover the two reasons you have no control over -- genetic predisposition and aging.

DNA has a big impact on your weight (The MD Factor Diet, 2015). When I was in medical school I read an article that made a lasting impression. It said that if both parents were obese, the child had an 80 percent likelihood of becoming obese. This struck me not only because it's a staggering statistic, but because my family has always suffered with our weight, I have to be very mindful of my own diet and exercise because I'm genetically predisposed to gain and retain weight.

You may have been born with cells that don't respond well to insulin. If your family has a history of diabetes (particularly from your parents) you're at high risk of developing a dysfunctional metabolism. Your genes also determine how your body stores fat (e.g., if you're apple-shaped, you'll carry fat in your abdominal area and be at risk of having two contributing factors -- genetics and belly fat -- to your Insulin Resistance).

Just like we can't control the genes we were born with, we all grow older. As this occurs, our hormones gradually decline. Declining hormone levels affect muscle mass causing it to be lost first while your body holds onto its fat stores. As you age, you need to be more mindful of what you eat and your physical lifestyle. After all, few of us can eat the same at 50 as we did at 30.

There are several examples of correlation of aging and weight. Pre-menopausal women typically gain 10-15 pounds (though I've had patients with up to 30-pound weight gain) around menopause (Women's Health Research Program, Department of Epidemiology and Preventive Medicine, Monash University, Melbourne, Australia). It's not just hormones like testosterone and estrogen that shift to affect your weight. The body's ability to use insulin does gradually decline, though it can be slowed by diet and regular physical activity. Type 2 diabetes has been shown to get more prevalent as you age, according to the Centers for Disease Control. Currently, half of all Americans aged 65 years and older have prediabetes. Without lifestyle changes to improve their health and manage Insulin Resistance, up to 30 percent of people with prediabetes will develop Type 2 diabetes within five years.

In order to avoid weight gain, diabetes, and other medical problems (like heart disease) as you age, you need to eat and exercise to minimize the effects of insulin resistance.

Do you have a dysfunctional metabolism?
My patients feel a lot better about their weight struggles once they realize that they're overweight not because they ate too much or are lazy. Body weight and weight regulation are highly complex and influenced by many different genes. You may have been born with factors out of your control, but you can put that control back in your capable hands.

Take this free quiz to see if you have sensitivities to insulin, and get an action plan featuring what steps you can take to start correcting your metabolism dysfunction:

Where do we go from here?
Insulin resistance is caused by changes in how your body is able to use the nutrients in your food. It's very common, but not often recognized by those who have it -- or their physicians.

If you've tried to lose weight and haven't made any real progress, one thing is certain: Your metabolism has changed. Your old metabolism has been replaced by one that likes storing fat.

Healthy lifestyle and diet is important and can help regulate insulin levels. Exercise can also help the body regulate blood glucose and keep excess weight off.

You may have been born with genetic predisposition to gain and retain weight, but by making a few lifestyle changes, you can reverse the impact of the MD factor. By adjusting your diet and lifestyle, you can eat better, sleep better, have more energy, be sharper and more focused and lower your risk for heart disease, some cancers, stroke and dementia (The MD Factor Diet 2015).